Amazon Go (Get a New Job) 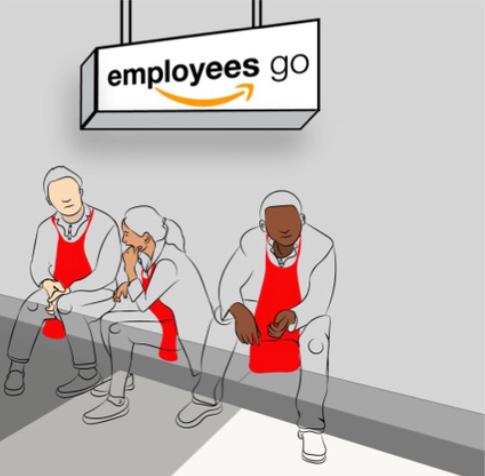 Amazon’s latest feat of successfully opening and operating a nearly fully-automated “cashierless” convenience store, dubbed “Amazon Go,”  impressed me for two reasons. One, I’m from the Bay Area, which means I’ve been conditioned to eat, breathe and live tech. Two, they found a way to trick customers, who usually have an extremely difficult time returning items to the correct aisle into happily doing the majority of the work.

However, once I took off my rose-colored glasses and snapped back into reality, the description “cashierless” began to set in. As someone who has personally held the title of cashier over the years and worked at a Whole Foods, Amazon’s accomplishment, which had seemed awesome when I had first read the news, now felt sinister and like an attack on my former co-workers and their jobs.

My mind began racing with thoughts. What would they do if they lost their jobs? How would they support their families? Would they have time to learn skills that would make it advantageous for their employers to keep them? What if they didn’t?

Now you may be thinking cashiers can simply find a new job, or it’s not that big of a deal if they are out of work, but that’s not the case.

Although I was only part-time when I worked at Whole Foods, there were also full-time employees depending on the income. Contrary to what people may believe, cashier’s aren’t just college and high school students looking to get a little extra cash.

Some of the cashiers at Whole Foods even worked additional full-time positions to ensure they could provide for their families. One of my favorite co-workers told me he was encouraging his daughter to go to college so she wouldn’t have to work as hard as he does. Despite working not one, not two, but three jobs, he always had a friendly smile for me when I arrived to work and made no complaints. I’m sure he isn’t the only cashier in that position.

In 2016, there were 3.5 million cashiers in the United States alone, according to the Bureau of Labor Statistics Occupational Outlook Handbook. I took some comfort in the fact the same report showed only a 1 percent projected decrease for the occupation of cashier between 2016 and 2026, equating to 30,600 jobs lost. However, the report also cited technological advances, such as self-service checkout stands in retail stores and increasing online sales as the influencing factor behind the decline.

One could argue the workforce prevailed when facing a similar challenge during the Industrial Revolution in the 19th century, when inventions such as the steam engine and automated loom threatened factory workers jobs.

Contrary to the workers’ concern, the machines, which allowed output to grow exponentially, and therefore leading to reduced costs and larger demand, effectually created more jobs with workers simply turning their attention to different tasks, such as tending to the machines that were originally feared to be “replacing them,” according The Economist’s article, “Automation and anxiety.” For instance, weavers (also known as textiles workers) numbers increased fourfold between 1830 and 1900,  supporting the argument of automation creating new jobs.

This phenomenon has been seen consistently across multiple occupations, including bank tellers, who faced the challenges of the ATM, and graphic designers, who had to adapt to new computerized software, according to The Economist.

Despite historical evidence that automation is not the enemy, I am not convinced. For one main reason, the theory has not stood the test of Artificial Intelligence. The difference? AI would require “non-skilled” workers to be trained in “skilled” work in order to keep their jobs, as opposed to seamlessly transitioning  into a new task, according to The Economist.

With college tuition and fees continuing to rise, increasing by a shocking 63 percent between January 2006 and July 2016, according to the Economics Daily report from the Bureau of Labor Statistics, I can’t see employers investing in educating their current workers. Especially when it would be more economically beneficial to simply hire someone on who already possesses the required skills of the job — a concern mirrored in Fortune’s article, “Automation and anxiety.” Cashiers, who make an approximated $20,180 per year, according to the Bureau of Labor Statistics Occupational Outlook Handbook, would not have the means to finance their own education.

“Amazon Go” utilizes AI-powered technology in order to track items a shopper picks up to then place in their “virtual shopping cart,” through data collected from hundreds of cameras and weight sensors, according to the Chicago Tribune. Those who currently hold the title of cashier are in grave danger of having their jobs eliminated in the future.

I wonder if the cashiers I worked with, or those in other jobs who are projected to be automated, looked at the news about Amazon Go as I first had — with excitement and awe —or immediately began to worry about their future and the future of those they love.

As the world moves toward becoming more automated and less human, I think it is important to not forget the people whose lives will be altered in the process. Next time you are reveling at a cool new robot, machine or algorithm, remember to take a step back, look around and think about the wider implications.