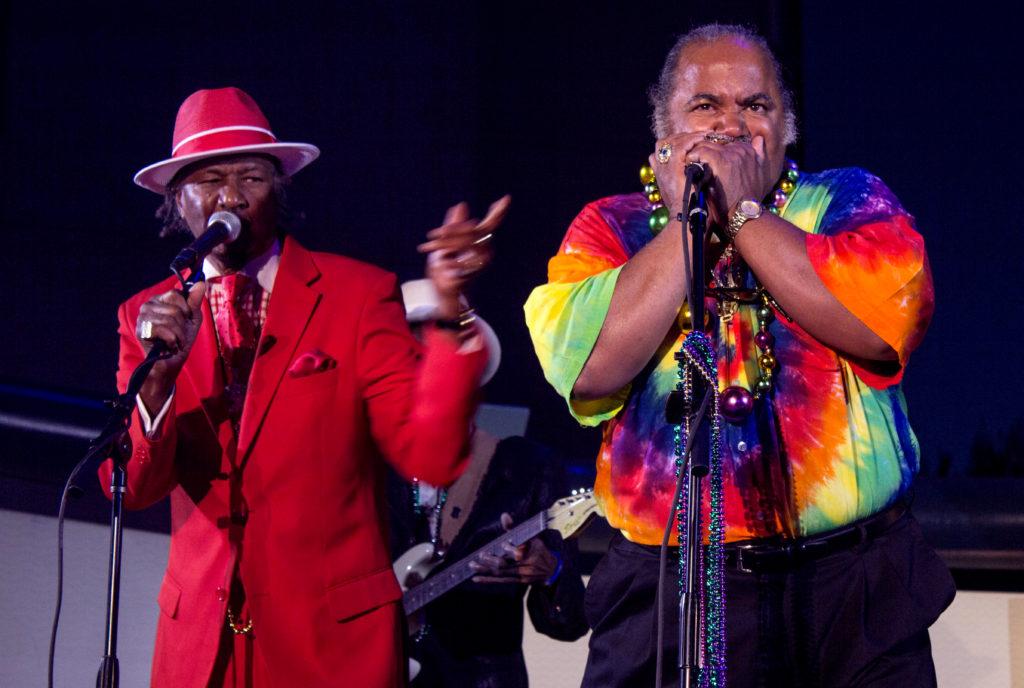 (Left to Right) Fillmore Slim guest sings alongside Silver Fox who is playing the Harmonica at the 12th annual Mardi Gras celebration at the Fillmore Center Plaza on Feb. 13, 2018. (Jordi Molina/Golden Gate Xpress)

The night was filled with live music and dancing as The Village Project, a non-profit organization based in San Francisco, threw a free concert for the 12th annual Mardi Gras celebration on Feb. 13. People of all ages and backgrounds came together and packed the Fillmore Center Plaza, lighting up the Fillmore District.

August Forman, a native of New Orleans, Louisiana, was at the event to support London Breed, who sponsored the event. However, he also wanted to support a celebration that is near and dear to his heart.

“Last year it was the biggest one ever, and I believe this year will be even bigger,” said Forman when asked about Mardi Gras in his hometown. “But I’m not out there. I’m here in San Francisco so I have to come here and support the locals and their Mardi Gras event and also represent New Orleans.”

The festivities began when the Silver Fox Blues Band started performing in front of a small crowd. However, the crowd quickly grew as the night went on, even spilling over to the sidewalk at one point. The music ranged from slow and somber to upbeat and lively as the band catered to young and old people alike.

“You know we’re bringing the music back to Fillmore. This street used to be prominently black and now it’s hard to find a black business on Fillmore but we’re trying our best to at least bring the music back,” said the lead singer of the band, who simply wanted to be referred to as The Silver Fox.

The plaza was donned in traditional Mardi Gras colors as purple and green lights were shining throughout the area. People in the crowd also wore purple and green beads along with other traditional Mardi Gras apparel, including masquerade masks and face-paint. Even though the event was held in San Francisco, it embodied the vibe of New Orleans, a city where Mardi Gras is celebrated with unparalleled passion due to the heavy French influence in the area.

“I think in the community people seem to like it and also there’s some tourists that have asked about it and ended up buying some beads from me,” said volunteer Roberta McLaughlin, who has been helping out at the event for the past three years.

Plenty of volunteers, many of which were young adults from the neighborhood, were selling and handing out apparel. At one point, the director of The Village Project, Adrian Williams, who is also a native of New Orleans herself, was throwing beads into the crowd from the stage.

The event, much like the organization that threw it, focused on being youth-friendly, as well as culturally diverse. It was a place where everyone was able to have a good time without having to worry about being judged.

“It’s for everybody. There’s no racism going on. It’s just everybody enjoying themselves,” said volunteer Yaseen Alghazali, who lives in the Fillmore District. “It brings people together.”

Toward the end of their show, the band even brought out a legend from the neighborhood to sing with them: the great Clarence “Fillmore Slim” Sims. He performed a number of his classic songs in front of the crowd, many of whom seemed to know him personally.

After the band finished their set, the night ended with a procession down Fillmore street led by the Saint Gabriel Brass Band along with SambaFunk!. Those who followed the group ended up at the Westbay Conference Center where the Mardi Gras Masquerade Ball took place. The celebration continued there for the rest of the night, as guests were able to party at the ball.

“It’s good to be home. I done played all over the world but there’s nothing like playing at home baby,” said Slim to the crowd.