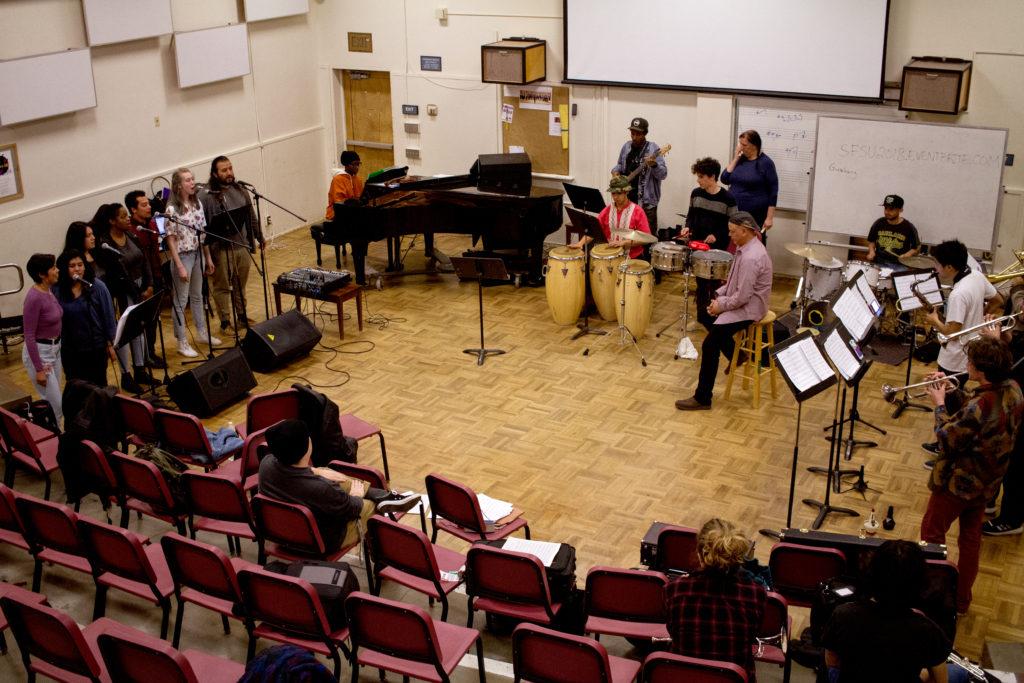 The SF State Afro-Cuban Ensemble works through a song together at their rehearsal at SF State on Wednesday, Feb. 21, 2018.

Loud chatter turned into soft murmurs as the professor walked in. The students gathered their instruments and prepared their voices for a three-hour practice which many would find excessive, but for these students, it’s a getaway.

As the group practices a rendition of “Niña,” the pasty walls in the classroom become more lively with the sound of the ensemble. John Calloway, who has been apart of the Afro-Cuban Jazz ensemble for 18 years, enters the classroom. Calloway has a determined facial expression as he’s conducting the group, he flips his hat backwards as the music intensifies. The vocalists start to groove along with the rhythm of the music and begin to dance along with one another. “That was better,” said Calloway.

“It’s even better than I imagined. It’s a really cool place to be,” Emily Gonzales, an undeclared major, stated as she was taking a break from playing the trumpet in the ensemble.

For many students, this Afro-Cuban Jazz ensemble brings them closer to culture, different genres of music, friendships and overall a better college experience at SF State. The ensemble started in 1999 and has been delivering excellence throughout the years. The group has been lucky enough to work with such acts as Orquesta Aragon, Israel “Cachao” and Benny Velarde, all powerhouse names within the genre.

For Lizbet Cruz, a music education major, the group gives her a sense of her home life with her parents.

“It’s hard being away from home, especially not seeing my parents for a very long time so joining the Afro-Cuban Jazz ensemble makes me feel closer to my family in Southern California and Mexico.”

The ensemble was close to coming to an end this semester due to the recent low enrollment the department has been facing within their music courses. The class didn’t even make on the registration list for this semester, worrying many that the ensemble of 18 years would come to an end.

Students like Juan Saldana, a jazz performance and composition major, made sure the ensemble could live on and eventually his voice saved the group from cancellation.

The ensemble has also brought many opportunities for the students. For Saldana, being in the group has opened many doors for him. “I started working as Calloway’s networker and broadcaster with all the social media we have for the Afro-Cuban Jazz ensemble.” He was also able to land a hosting gig for the infamous Carnaval parade that takes place every year, celebrating the Latin culture within in the Mission district.

From Thrasher tees to button up shirts, from ages ranging young to old, the Afro-Cuban Jazz Ensemble is a diverse haven for many.

“My proudest moment was joining this ensemble,” said Roberto Ruiz, a music performance major. “This music brings out the best in me.”