Gators close out weekend with a win, take series 3-1 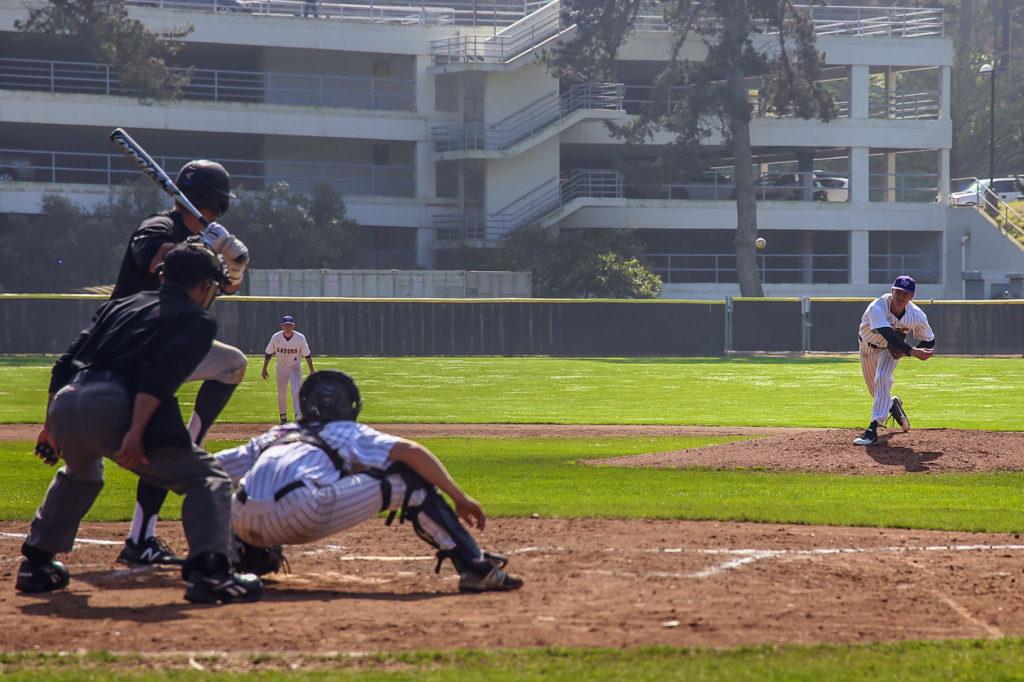 The men’s baseball team started their Sunday off right with a narrow victory against Cal State San Marcos on March 11 at Maloney Field.

The final score of the game was 9-7. The Gators managed to edge past the visitors on their home field after suffering a 10-4 loss on Saturday to take the series, three games to one.

The Cougars broke the scoring plane first by putting up two runs in the opening inning. The Gators responded by scoring two runs of their own in the bottom of the first. Sophomore shortstop Jackson Kritsch scored off a single by first baseman Harley Lopez. Lopez then scored himself off of a hit by freshman Trevor Rogers.

Outfielder Jack Harris (11) catches a ball in between innings at the game against Cal State San Marcos at Maloney Field in San Francisco on Sunday, March. 11, 2018. (Adelyna Tirado/Golden Gate Xpress)

Junior pitcher Jeff Pivey started the game for the Gators and pitched well, with seven strikeouts and three runs allowed over five innings.

“Our pitching has been the most consistent thing all year,” said head coach Tony Schifano.

The Gators went on to take a 4-2 lead in the second after Kritsch hit a single to center field that resulted in two RBIs. He finished the game with 4 RBIs total.

The game remained close for most of the afternoon as the Cougars showed that they were a competitive team despite dropping the first two games of the series.

“We’ve played a lot of really good teams early, and just a lot of teams that have been good for a long time,” said junior infielder Brady Dorn.

The game started to pull in favor of the Gators in the eighth inning as the team jumped ahead 9-5. The inning consisted of two runs scored back-to-back off of doubles by Kritsch and Lopez. The Cougars, however, made a push in the top of the ninth with two more runs of their own that brought a sense of anxiety over the home crowd in attendance.

“We’ve been averaging three to four errors a game, that’s been the difference in our losses,” said Schifano. “We’ve pitched really well but we haven’t executed on defense.”

The Gators were eventually able to ease the crowd by putting the game away in the ninth after a strikeout by senior pitcher Jordan Yrastorza. The win leaves the Gators with a 6-15 record heading into their bye week. The team looks ahead to the rest of the season with hope, knowing they have already played against some of the toughest teams in the league early on.

“We’re going to be alright, we’re getting better every day,” said Dorn. “The teams coming forward are definitely teams that we can handle and have had success against in the past.”

The Gators will retake the field on Friday, March 23 back at Maloney Field against Cal Poly Pomona.