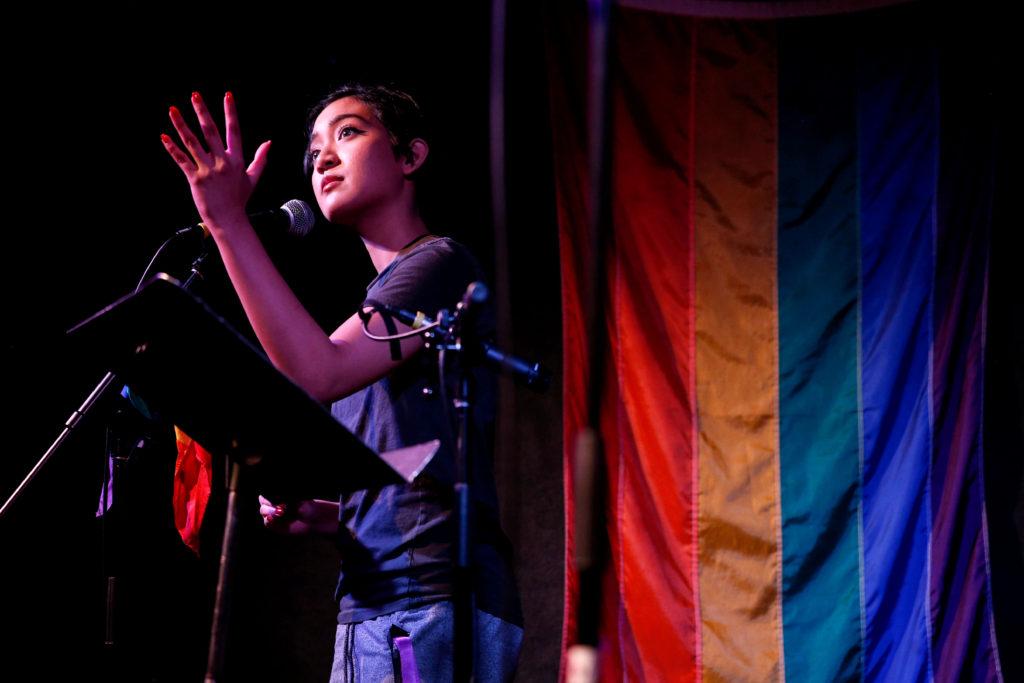 Alennie Roldan recites a haiku during the first half of the Queer Open Mic Night at The Depot on Monday, March 5, 2018. (Niko LaBarbera/Golden Gate Xpress)

To some, the popular song “Express Yourself,” written and sung by Charles Wright and The Watts, is more than just
a song to SF State’s LGBTQ+ students. It’s a safe space to express yourself.
Safe zones play a pivotal role in fostering a safe campus environment by building a support system through a channel of people of all genders and different ethnicities. These safe zones have evolved from your traditional safe
havens that usually consist of a private room. Nowadays, safe zones have extended outside into the public forums.
SF State students congregated at The Depot last Monday night, March 5, located in the Cesar Chavez Student Center, for SF State’s second annual Queer Open Mic Night, hosted by Reslife’s Rainbow Floor in association with the student organization Queer Alliance.
Though the event is mainly geared towards targeting SF States LGBTQ+ community, the function encouraged a friendly and welcoming environment.
As performers hit the stage to express themselves through various artistic mediums such as poetry, music, graphic design and stand-up comedy,. a huge factor that united all attendees during the event was the sense of a safe space.
Biology major AJ Nicolai said, “It’s a safe place where I can go and socialize and completely be myself, because of the like-minded individuals and similarities of being LGBTQ.”
Talented performers such as Jocelyn Canales, who shook the crowd with an intimate poem written about her identity, and Cynthia Beltran, who serenaded the audience with the oral art form of spoken word. Both expressed their struggles and frustrations with not being accepted by society because of their identity.
“I grew up not really knowing diversity or had seen anyone that was like me on T.V. that’s why this event is  important, because everyone gets to know other people’s stories,” said Beltran, musician and studio arts major.
“When I go missing, will these brittle bones ever deserve an amber alert, because there is no amber alert for the amber skin,” said Foothill Community College student Jocelyn Canales in an excerpt taken from her slam poem, “Identity.”
When asked what the underlying message behind the poem was, Canales said, “I was trying to represent the
contrast between being a minority versus people that are regularly represented in the media.”

Beltran and Canales are primary examples of how safe spaces have broken into mainstream and have
focused on lending a helping hand to individuals who feel different.
The co-existence of safe spaces and self-expression promote and perpetuate a symbiotic relationship that encourages queer voices to be heard and taken serious without judgment.
“Spaces such as Queer Open Mic Night encourages people to be vulnerable and when individuals are defenseless, it leads to empathy,” said Saida Edwards, junior at SF State.
Jomar Lopes, a 19-year-old freshman at SF State said, “It’s nice to come out and see the LGBTQ+ community encouraging people to live their lives freely without fear.”