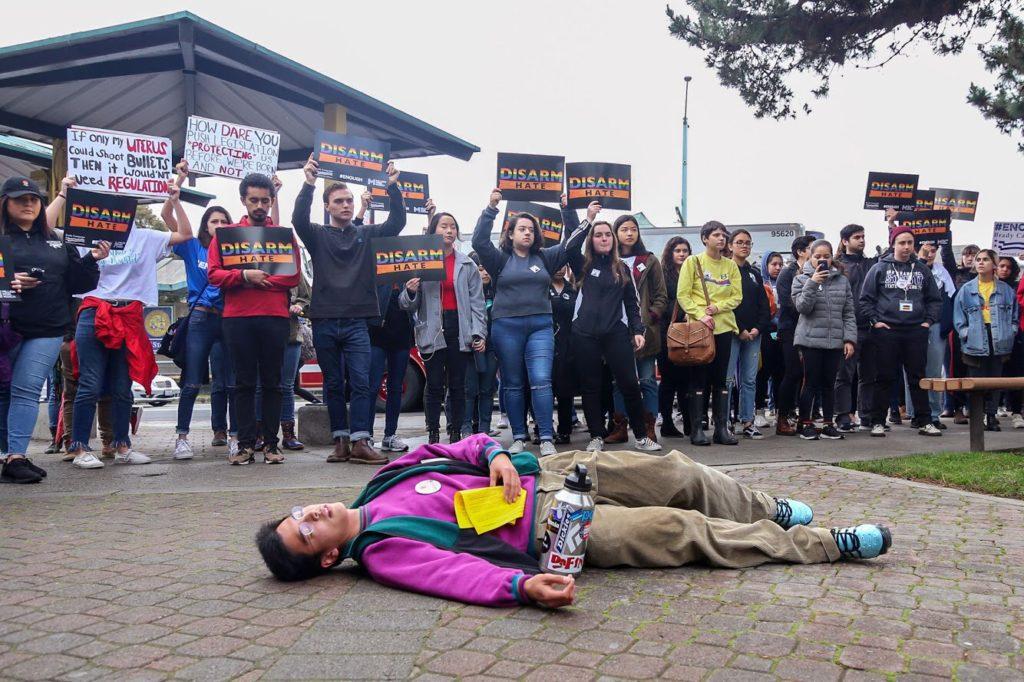 In representation of the students who have passed away due to gun violence, Ernest Li lies down on the floor at SF State during a moment of silence of the walkout on Wednesday, March 14, 2018. (Adelyna Tirado/ Golden Gate Xpress)

“No more silence end gun violence,” is just one of the many chants that students and fellow supporters against gun violence were shouting nationwide in an effort to demand better gun control laws.

Multiple organizations like Planned Parenthood Generation Action at SF State and Brady Campaign congregated at Malcolm X Plaza on campus to participate in the walkout.

Psychology major Lali Mosqueda, who is a part of Planned Parenthood Generation Action, said she “had seen the walk out on Facebook and decided to make posters with [her] roommate.”

During the event, multiple protesters held signs that demanded better gun control policies. Some of these included “How dare you push legislation ‘protecting’ us before we are born and not after,” and “If only my uterus could shoot bullets then it wouldn’t need regulation.”

Many of the participants spoke about their personal experiences with gun violence. One of whom included computer science major Ibraheem Chaudry, who helped organize the walkout.

Chaudry, who is from Pakistan, expressed frustration over his inability to voice his concerns over controversial issues in his country.

“My country doesn’t offer platforms for activism. I couldn’t do anything about it,” said Chaudry.

Chaudry has experienced a school shooting in the past and wanted to channel those feelings into something more positive.

“I’m not a nationalist person. I’m a person who rises up for human beings,” said Chaudry.

Some participated in the walkout because they’ve personally been affected by gun violence and attended the march to demand critical change.

“I lost a cousin to gun violence last week,” said Alfredo Lopez, a film major. “So far I have lost two cousins to gun violence. One was a couple of years ago, she was a mother of two.”

Lopez hopes that historic marches such as these can invoke influential changes in gun control policies.

The school shooting in Parkland, Florida touched a nerve in many people, but some protesters found that gun violence issues expanded beyond school grounds.

“I feel like the government isn’t taking this seriously, especially when it comes to race,” said said undergrad Adedoyin Adegunwa. “With the shootings that keep happening in schools, it is all people who are [not] people of color doing these shootings. If it was a person of color they would take it more seriously.”

A running theme that united all attendees during the walkout is the importance of educating the public.

“I think there’s a lot of misinformation out there of gun control and what people are asking for has nothing to do with getting rid of the second amendment,” said Soumyaa Behrens, a lecturer for the school of cinema at SF State. “It has to do with reasonable, logical, applications of the laws that make people safe and assault weapons are not safe.”

March For Our Lives organized another march to push for gun control legislation in participating cities including San Francisco on March 24 and April 20 — 19 years after the Columbine High School massacre.