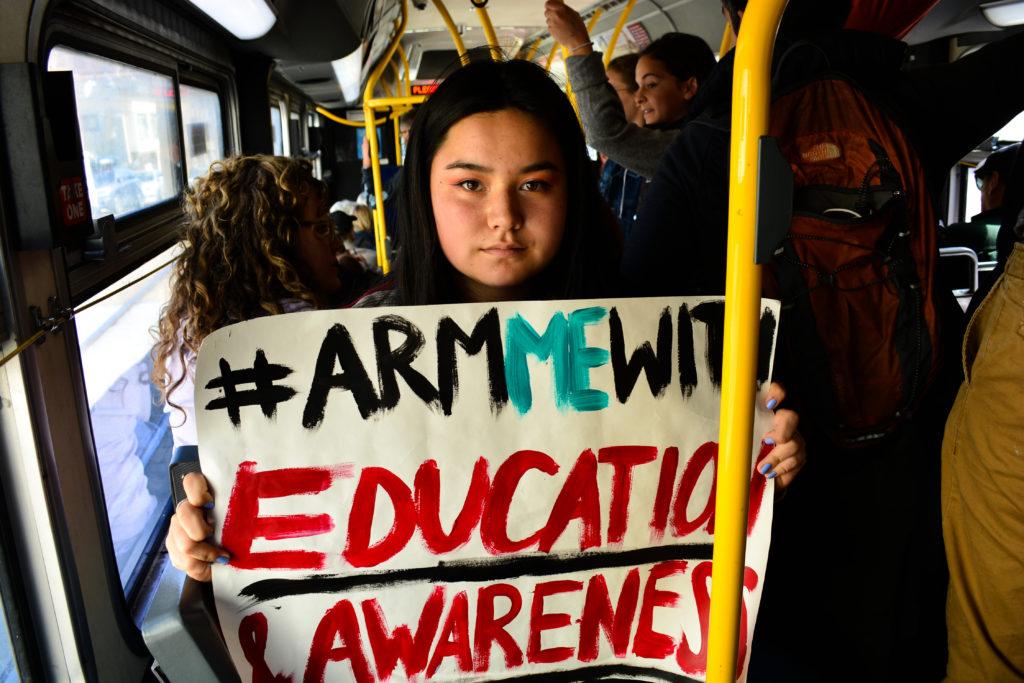 Throughout America hundreds of thousands of protesters rallied for social change and common sense gun laws as a part of the March For Our Lives campaign in response to numerous school shootings on March 24.

Ibraheem Chaudrey, a 21-year-old undergraduate student at SF State studying computer science, stood before an audience of 30,000 who were all gathered in solidarity in front of San Francisco’s City Hall to protest gun violence in America.

“Dreamers can’t dream if their  minds are engulfed in fear,” shouted Chaudrey with shouts of approval and solidarity among the crowd. “Enough is enough. Parkland, Las Vegas, Sutherland Springs, the list is never ending and it keeps on happening. We won’t back down until these massacres are a thing of the past.”

Maya Segal, a 15-year-old freshman student of Hillsborough’s Crystal Springs Upland High School, also took the stage Saturday afternoon. And with a stern look on her face she spoke to the crowd with determination.

March For Our Lives was a nationwide event created and led by students across America following the aftermath of the Stoneman Douglas High School shooting in Parkland, Florida. Fourteen students and three faculty members were killed by a lone 19-year-old student gunman.

The San Francisco rally’s speaker line-up was primarily chosen by student volunteers and high school organizations involved in the Bay Area March For Our Lives campaign.

According to a Washington Post analysis of past school shootings since the Columbine massacre of 1999, more than 187,000 students attending primary and secondary schools in America have experienced a shooting. An article by CNN reports that there have already been 17 school shootings in 2018 where someone was either hurt or killed.

“Back then a mass shooting seemed like a one off event,” said speaker Briar Goldberg, a Columbine shooting survivor. “Columbine wasn’t the first, but here we are still … I had resigned to the narrative that this is the new normal for our country but then the kids in Parkland started speaking up and for the first time something felt different.”

Jason Chen, one of the students that led the march, credited his peers and teachers for helping him become active in gun reform.

“I started because I heard that students were leading change all across the nation and I really wanted to be a part of that so I emailed one of my city’s supervisors and got involved immediately,” said Chen a senior at Lowell High School.

Isabella Khoo-Miller, a senior at Branson High School in Marin County, also took up activism after experiencing the surge in student involvement.

“I’ve always been really passionate about fighting gun violence, especially how it affects communities of color,” said Khoo-Miller. “So when it first started becoming a youth -ed movement, I knew I had to get involved. I started with planning my school’s walkout and from there it snowballed into me being here today.”

“If we are old enough to prepare for mass shootings than we are old enough to talk about guns,” said Charlotte and Dylan Dodson –– both twelve years old and identical twins attending Marin Country Day School. “Our generation is adding about 350,000 new 18-year-olds to the voting population every month. We are the future and we are not going away. History has its eyes on us so we can’t stop here.”

A national school walkout is planned in various schools around the country on April 20, which marks the 19th anniversary of the Columbine Massacre.