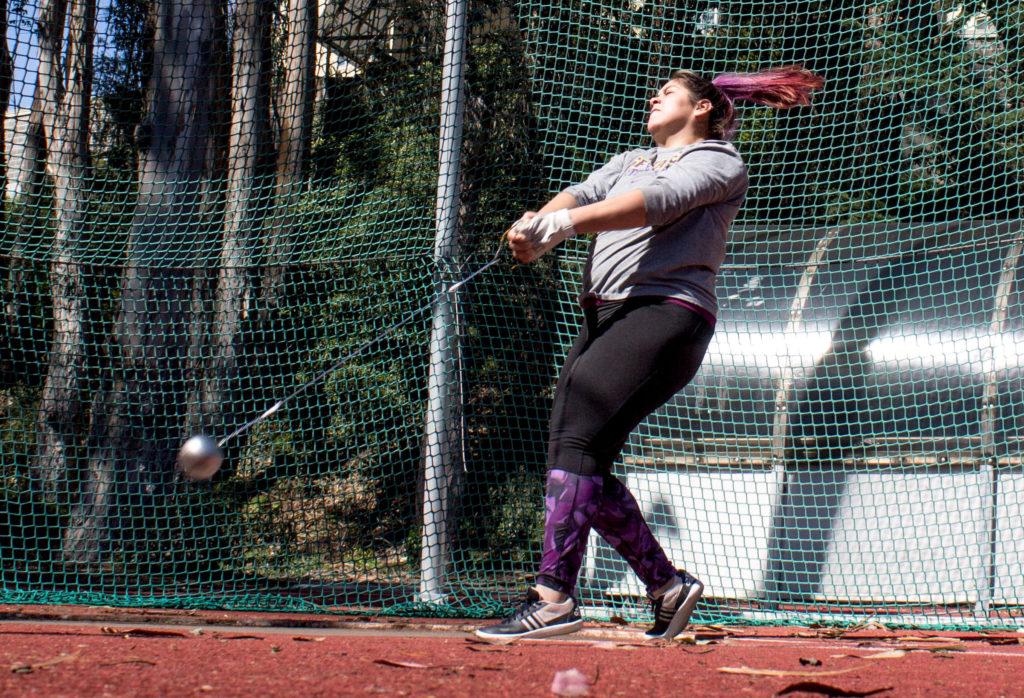 Arlene Penaloza is spinning the hammer around during practice. Photo by Jordi Molina/Golden Gate Xpress

The women’s track and field team started the outdoor season off with a bang, coming in with the No. 1 ranking in the nation, according to the U.S. Track & Field and Cross Country Coaches Association (USTFCCCA). This is the highest outdoor ranking that the program has ever been given.

The Gators have never ranked in the top five nationally and showed significant improvement from last season’s opening ranking of No. 12.

“It’s our best starting point ever so that’s the exciting part about it,” said head coach Kendra Reimer. “It’s something we’ve got to keep fighting for every week. It’s not a set thing.”

The 2018 outdoor season began on March 17 at the Hornet Invitational in Sacramento. The team had a number of athletes place in the top 10 NCAA Division II Descending Order List.

Junior thrower Destiny Mack-Talalemotu was responsible for three of those top 10 marks herself. She holds the top distance in the nation in both shotput (14.7m) and discus (50.32m). She also ranks fourth in hammer-throws with a distance of 57.02m.

“We just need to keep the mindset that it’s not over until it’s over,” said Mack-Talalemotu. “I think our team just needs to keep strong in our training and not let the attention of being number one get to us. We have to keep fighting for it as if we don’t have it.”

Junior thrower Courtney Massengale was right behind Mack-Talalemotu in the discus rankings with the second overall mark in the event (48.77m). Junior sprinter Monisha Lewis finished fourth in the 100 meter hurdles (14.19 seconds) while junior Devanique Brown had the fourth highest score in the heptathlon (4,496 points). The team also had the second fastest times in both the 4×100 (46.87 seconds) and the 4×400 (3:48.04).

While being ranked No. 1 out of the gates is a great accomplishment in itself, the team realizes that this is just the beginning of a long outdoor season. The general consensus within the team is that the biggest obstacles to overcome before Nationals is to knock off Chico State and become Conference Champions.

“We really have a big spotlight on us, especially because we’re moving up every year,” said Massengale. “Winning conference and finishing top five in nationals is our really big goal. As long as we do our best and perform I think we can do it.”

The recognition that the Gators are experiencing right now has been a long time coming. While the team is still growing as a unit, they have started to get a glimpse of what their full potential is if they put in the work.

“This team is still growing and they’re working hard and learning how to understand their place in things,” said throwing coach Christa Younger. “And their place is high up there, they’re a very talented group.”

The week two rankings were released on Tuesday, March 27, and the team remains No. 1 in the nation. Despite being early in the season, the team’s confidence is already in place, as everyone seems to believe that they have what it takes to win the conference and dominate in Nationals.

The Gators hope to keep the momentum going when they compete next at the SF State Distance Carnival in Hayward on Friday, March 30.