#FundTheDream rally at the State Capitol 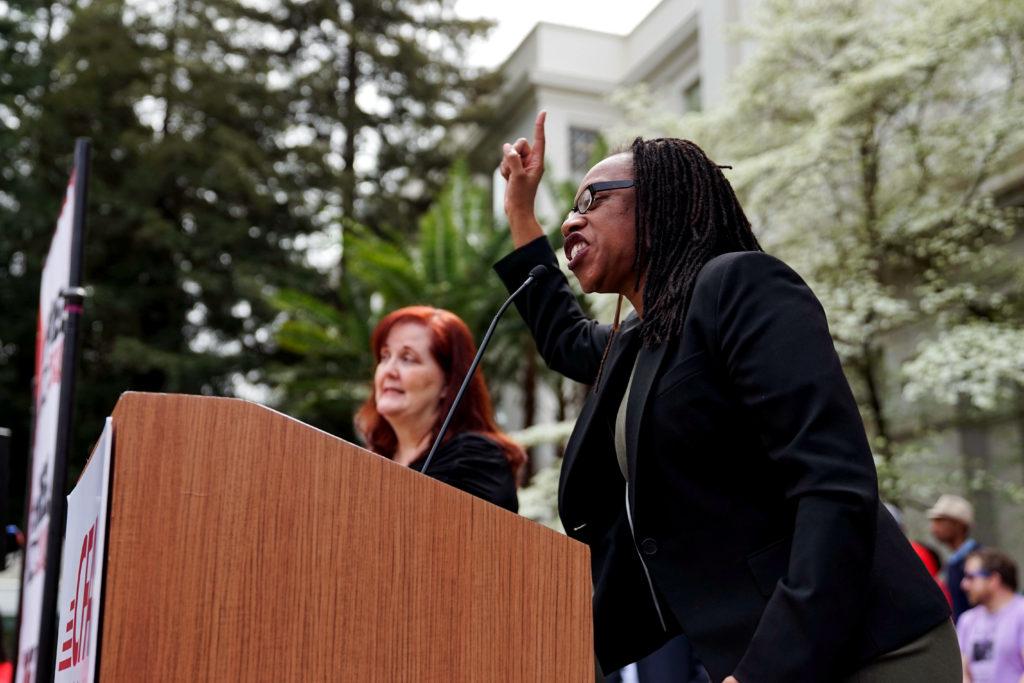 Lateefah Simon, CSU Board of Trustees member and program director for the Rosenberg Foundation, leads a protest aimed at singling out Governor Jerry Brown at the State Capitol on Wednesday, April 4, 2018. (Amarah Hernandez/Golden Gate Xpress)

The California Faculty Association (CFA), along with student and faculty members from all 23 California State Universities, held a rally on Wednesday April 4, calling attention to Gov. Jerry Brown and legislatures in Sacramento regarding issues relating to the decline in CSU funding, tuition increases, food insecurity, deportation and discrimination –– all of which are affecting marginalized groups within the CSU system.

Over 1,000 students and faculty from the 23 CSU campuses rallied at the California State Capitol to protest Gov. Jerry Brown’s 2018-2019 State budget proposal. The Board of Trustees proposed an increase of $282.9 million in November of last year. The CFAis proposing  $422.6 million in funds that would help increase student enrollment by 5 percent, as stated by CFA President Jennifer Eagan in an open letter to the chancellor and CSU Trustees earlier this January.

The CSU’s total operating budget of $6.8 billion is consistent of state-federal funding as well as tuition and fee revenue. Over the past 25 years, state support per student for CSU has declined while enrollment continues to increase. State funding has remained thousands of dollars below 1990’s levels, according to CSU 2018-2019 Budget update. However, according to the California Fiscal Outlook report conducted by the Legislative Analyst’s office, it is estimated that by the end of the 2018-2019 fiscal year, their will be a 2.3 percent increase from 2017-2019 in CSU funding.

SF State’s Students for Quality Education organized 70 student activists and supporters to rally at the state Capitol alongside all other CSUs. One of the speakers from the rally and SQE Organizer, Shiba Bandeeba, shared her story emphasizing the financial struggle that students must face to obtain a college education.

“I am now graduating college this May, with $20,000 in debt. Not to mention, this was only four years. I cannot imagine how much debt I would be in if I wasn’t working three jobs and I’m still not done with my education,” said Bandeeba.

In a press release conducted earlier in January by CSU Chancellor Timothy P. White, he stated that although the CSU Trustees had proposed a budget increase on November 2017, Brown only proposed a budget that created a $171 million gap between the trustees’ request.

With the approved budgets that are being proposed each year, CFA President Jennifer Eagan stated that CSUs are considering a 4 percent tuition increase this year.

“Those student fees aren’t even enough to fill in that hole in the budget that the CSU isn’t getting from the state,” said Eagan. “Campuses kept raising [campus based] fees and so students and families were continually paying more of the share for their public higher education that should have been funded by the state.”

However during the CSU rally, White told a California State University, Bakersfield student that she was misinformed on tuition increases.

“To say tuition has been increasing, it has increased once in five years, and regretfully, but all that money went to support more courses and hire more faculty,” said White.

Out of the $190 billion in state funds, Higher Education agencies would only receive 8.4 percent compared to 29.4 percent for K-12 education and 32.1 percent for Health and Human Services, which are the governor’s main focus of funding for the 2018-2019 Budget, according to Governor’s Budget. .

“California has faced ten recessions since World War II and we must prepare for the eleventh. Yes, we have had some very good years and program spending has increased steadily,” said Governor Brown in a January press release.

According to the Legislative Analyst’s Office, there would be a total of $7.5 billion accumulated in discretionary reserves, otherwise known as Rainy Day Fund, by the end of the 2018-2019 fiscal year. The Rainy Day Fund is another main priority on Gov. Brown’s budget and would be considered to be reserves available for future budget emergencies.

Although the state needs to save these reserves to help California in times of crisis,such as a future recession, due to the decrease in CSU funding, the CFA feels that those reserves should be used to meet their budget proposals.

“The Rainy Day Fund is the big pot of reserves that the governor has established,” said Eagan. “So that means that all of the services that we need to serve Californians should be fully functioning and that’s not true for public education right now.”

SF State Students for Quality Education organizer, Mariposa, who preferred to be referenced by her first name, expressed that due to a lack of funding, CSUs cannot offer an affordable education or meet the minimum obligations its students and faculty deserve.

“This is an institution, so without students this institution is nothing and that’s why we need a freer higher education system,” said Mariposa. “We’re the ones who make the university run and without them, they’re not getting paid and we need to voice that.”

Khya Osborne, a poet by the name of “Kyalypso” and a student at Sacramento City College, shared a poetry piece at the rally. She expressed how increasing tuition is a direct form of gatekeeping and leaves marginalized people without adequate access and resources to prosper.

Over the course of 30 years, CSU’s demographics have drastically shifted. From 1985 to 2015, the population of Latino/Hispanic students has increased by 15.9 percent while Asian/Pacific Islander student population has increased by 5.8 percent, according to a report from the CFA on disinvestment and its impact on students in ‘The People’s University’.

“The funding for the CSU used to be enough to cover just about all the costs for all qualified students and when that was happening, the student body was about 70 percent white,” said Eagan. “Now, 72 percent of CSU students are students of color and now there’s not enough money to accommodate all qualifying students.”

The Master Plan for Higher Education in California, established in 1960, set the standard for CSUs to be more accessible for anyone in search for higher education. Eagan stated that the state has failed on their promise since the amount being funded does not meet the number of qualified students who want to attend a CSU. She further states that it has also violated public policy as the state had committed to call for a college-educated workforce.

“About 10 years ago, the CSU turned away a little more than 6,000 students a year . . . now the CSU is turning away more than 30,000 qualified students,” Eagan said. “That is a real violation of the promise that was made to California’s young people, to be able to have a place in a university and it’s also bad public policy because the state committed that it needed a college educated workforce.”

Brown proposed an increase of $8 million for the 2018-2019 Budget for the Higher Education Agency to distribute funding to CSUs and University of California Student Aid Commissions, Board of Governors Community Colleges and others.

However, there has been a $148,000 decrease in funding for CSUs under that agency alone.

“I have seen a trend where with the influx of black and brown people into CSU systems, there has been a decline in the funding and I think this is not by coincidence,” said Sacramento State alumnus and hip-hop artist Scott Femenella. “This is just another example of the system trying to tear everybody down just so black and brown people in the community don’t have to compete with rich white men in this country.”

Andy Avalos, California State University, East Bay student, is a social advocate that challenges racial disparities in education through his art. His artistic expression helps him cope and make sense of the adversaries and disparities that occur, particularly with current CSU budget cuts. Avalos shared that he had previously written a letter to the chancellor and governor asking them questions of how they are perceived as college students.

“How much did [students] pay for [tuition] if they paid out of pocket or [did] their families paid for it? How much did their loans cost and how much interest did they pay for it back then … We see the truth you know. A burning bush is a burning bush,” said Avalos.

CSU campuses are some of the most ethnically and racially diverse in all of the United States, according to the CSU website. However, funding has drastically decreased and according to Mariposa, this can be attributed to the high percentage of people of color who are now receiving an education through the CSU system.

“As the CSU got darker, the funding got lighter,” said Mariposa. “…as black and brown students are getting educated, the funding was disappearing and that’s usually what that statement means.”

The final decision on the CSU budget will be implemented later this fall.