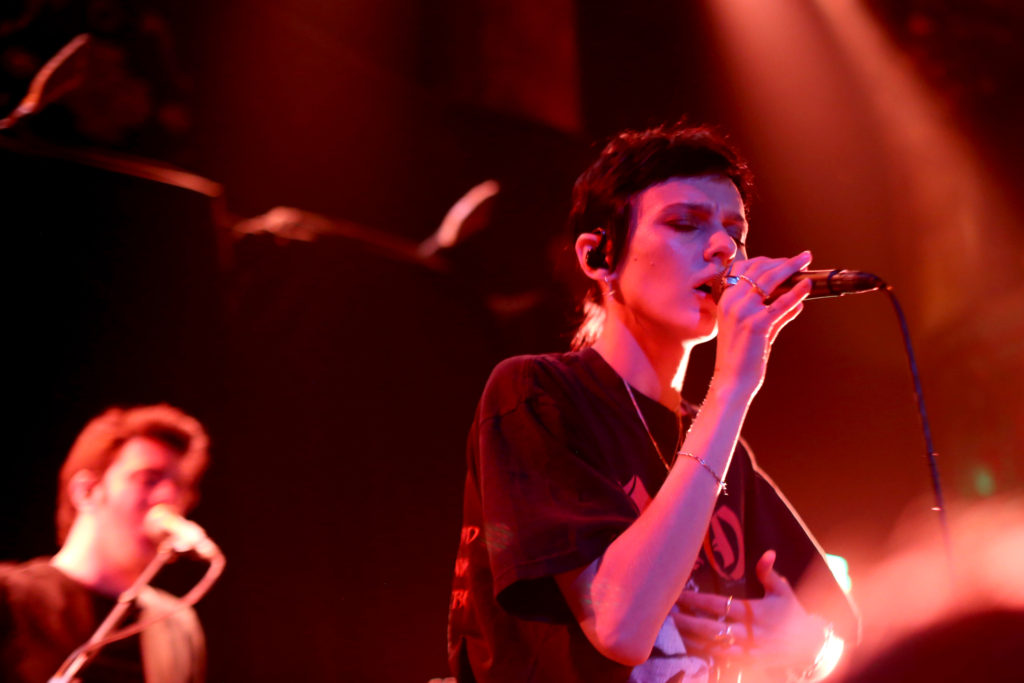 Stream lights flicker and euphoria floods the air at the Great American Music Hall as swarms of people crowd the stage awaiting the arrival of the featured artist, Morgan Saint, to take the stage as the opening act for the American pop-rock duo, Missio.

Growing up in New York on the eastern end of Long Island, Saint attended Parsons School of Design, a private art and design college located in the Greenwich Village neighborhood of Lower Manhattan. With a kooky sense of style and a unique voice to match, Saint was exposed to musical instruments at an early age.

Born with the musical gene that was passed down from her mother, and with a background in the arts, Saint draws inspiration from visual and musical artistry.

The featured artist said, “I’ve always loved music and my mom’s side of the family is really musical. I’m a visual artist as well and look more to visual art to inspire me.”

Just like any big artist or sports team, the up-and-coming musician is nothing without a support system such as family, friends and fellow band members Cass Dillion and John Badamo.

Linked together by similar interests and circumstances, the band is still fairly new. Having only been a band for nine months, the group has made huge leaps and bounds from playing at Lollapalooza to debuting their EP “17 Hero” on “Conan.”

Badamo, the band’s drummer, said, “That is what is so cool about being involved in the early stages. Building a foundation, I have never been involved in a project like this, so it is really incredible to come back to these cities and seeing new faces and the crowd growing.”

Dillion, guitarist and music producer added, “I think watching it all grow, specifically within this role. Seeing us all grow together is probably the most exciting part.”

Dillion and Badamo started off as friends. Badamo was later introduced to Saint through Dillion nine years ago, and they have been a trio ever since.

The musician, singer and songwriter’s music is highly influenced by different sounds that stem from various musical genres such as hip-hop, folk, pop, alternative-pop and R&B.

“I definitely feel like I’m influenced by a little hip-hop,” said Saint. “I don’t know if it’s a specific artist as much as it is different sounds from different genres and trying to make my own sounds by meshing everything that appeals to me.”

Saint’s music has been described as being moody pop by fans, however, the singer doesn’t necessarily agree with what others have to say.

“I hear that all the time, I wouldn’t personally put that label on it because, I don’t feel like I’m a moody person,” said the Parsons graduate. “I just write from a really honest place. I’m writing about happy moments and sad moments and in-between. I’m not afraid to be raw.”

Saint is hard at work writing new songs. The track “Paper Scissors,” which is one of 13 songs from the musician’s latest album that she recently wrapped up in the studio, is expected to drop by the end of the summer.

Having strong connections to songs that the musician writes and performs, Saint hopes that she is able to reach her supporters with songs that come from an honest place.

“I want to appeal to anyone that is their own person, I just really write from an honest place. Anyone that  feels that they can connect to that honesty, I hope can understand my music,” said Saint.