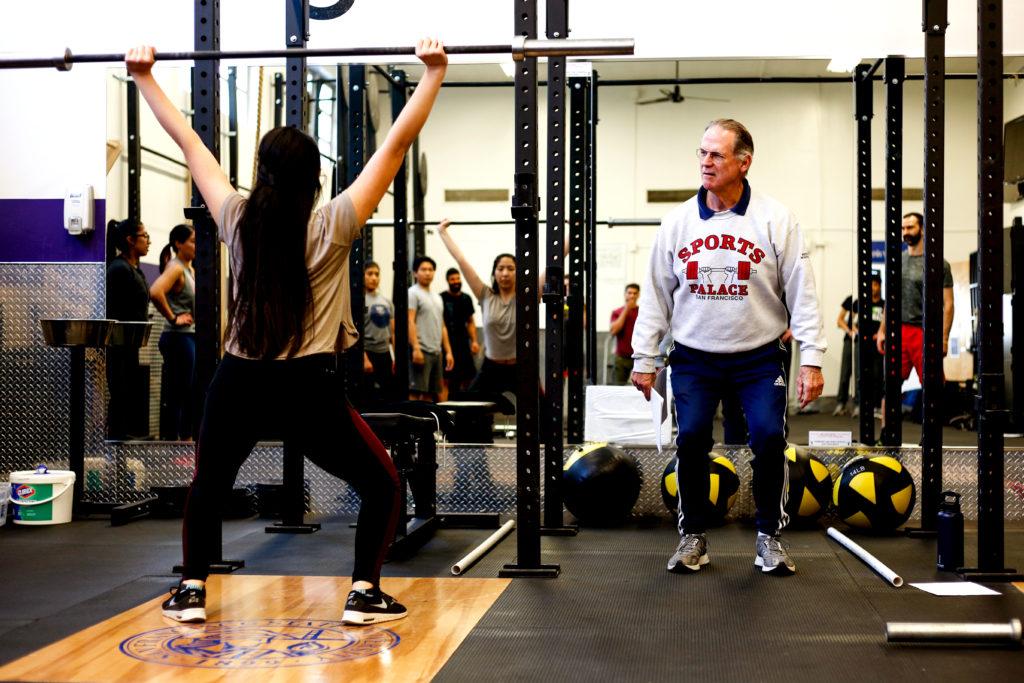 Sturdy, sound and as humble as ever, alumnus and former Olympic weightlifting coach Jim Schmitz returned to campus to teach an Olympic-style weightlifting seminar to students for the first time at SF State.
Schmitz was on the SF State football team during his freshman year in 1963 and became captain in 1967. He graduated the following year with a degree in physical education and eventually went on to own and coach at The Sports Palace, a weightlifting center located in South San Francisco.
Throughout his career as a coach, Schmitz has trained 10 men to 14 Olympics and three women to eight Women’s World Weightlifting Championships.
He credits SF State for being a big influence in him getting his start in the sport.

“The reason I even came to San Francisco State was that I looked at Chico State, Humboldt State, Sacramento State and a few others and in those days, in 1963, none of them had a weight room,” said Schmitz.
Of course, sports weren’t the only thing that Schmitz liked about the University. SF State was pioneering in areas other than weightlifting which also attracted him to the campus.
“It was a time of social, racial and sexual liberalization and socialization, and as an 18-year-old coming down here to go to school, it was like woah, a big city, the big world,” said Schmitz. “It influenced me tremendously in terms of having an understanding of human beings. It was a wonderful experience.”

Now, Schmitz juggles writing for MILO magazine, coaching at his gym and traveling to campuses to teach seminars on weightlifting.
“So many people want to be personal trainers, strength and conditioning coaches or just physical education teachers as well, and they really need to know about the Olympic-style weightlifting because it’s being widely used,” said
Schmitz.
His three-hour seminar centered around basic Olympic style weightlifting — the clean-andpress, the snatch and the clean-andjerk.
“Jim came to visit our labs last semester and we decided to set up this free workshop,” said Jimmy Bagley, a professor of kinesiology at SF State. He’s been helping to coordinate Olympic weightlifting clinics on campus for three years.
The new strength and conditioning lab in GYM 148 has made these workshops more accessible to students, since they can be held on campus now.
“The part that I really liked about the seminar was that he was able to go through a lot of movements,” said Jessica Bautista, a third-year kinesiology major who attended the seminar. “I don’t really have much experience with weightlifting, but he simplified enough to where I was able to get a hang of it.”

Schmitz was happy to return to his alma mater and help spread knowledge about correct forms for weightlifting. He hopes to continue his involvement with the school, as well as bring more alumni back too.
“We hope to have him back soon to run an official USA Weightlifting Certification workshop,” said Bagley.