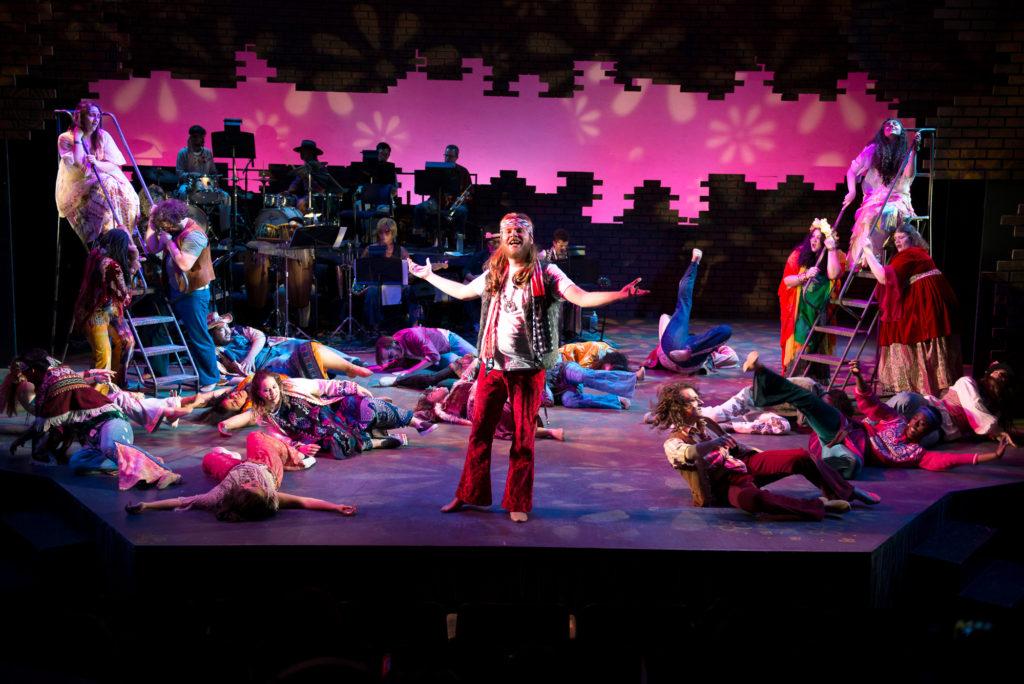 Neil Munz, stand in the middle of all his fellow cast members during rehearsals for "Hair" The American Tribal Love Rock Musical inside the Little Theater that is located in the creative arts building on Tuesday, Apr. 24, 2018. (David Rodriguez/Golden Gate Xpress)

Opening night drew in a sold-out crowd and non-stop cheering from the audience after each musical number.

Tyler Brilla, a communicative disorder major, described the production as one of the best shows he has seen at SF State.

“The singing was amazing, their performance was astonishing. All their voices were amazing, totally blew me away,” Brilla said. “I got goosebumps throughout the whole production.”

“Hair” is set in the late 1960s and follows the stories of young adults and their quirky antics with the help of some musical numbers. The production also focuses on the political climate of the 1960s.

“I think that things can be bleak and this shows a good example of a way to rise up and to still band up together as people and keep morale up, not to lose hope when it feels like the world around you is crumbling,” said Kayt Christensen, a creative writing major, after watching the production for the first time.

Each musical number had a unique twist toward the storyline and some enlisted the help from most of the cast, but others were solos or duets.

The production had a very diverse cast that consisted of 23 students. The cast brought a show-stopping performance that led to a standing ovation at the end of the production.

One of the many stars of the production, Shelbie Wayne, had tears in her eyes as her friends and supporters complimented her work.

“I feel overwhelmed, fleshed with emotions as you can see, I’m very happy, it was a very benefitting experience putting this together and just like the outcome and the reactions it just makes the experience worth wild,” said Wayne.

The production has been in the works since last school semester and has entailed the help of many faculty and students from the School of Theater and Dance. It also brought the cast members from the production closer than ever.

“We were very supportive, nervous, excited, loving towards one another,” said Wayne.

“Hair: The American Tribal Love Rock Musical” has four more showing at SF State’s Little Theater. May 3-5 at 7:30 p.m.and May 6 at 2 p.m. Tickets range from $15-$20 and can be bought at SF State’s box office located in the Creative Arts building.