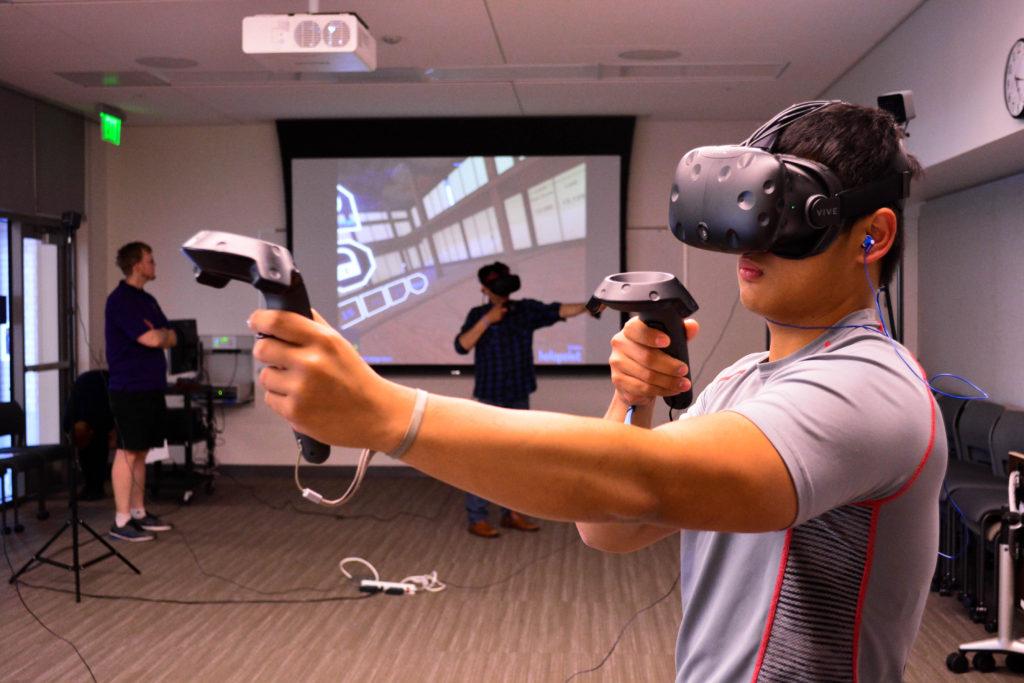 SF State students have had the privilege to use the first-rate facilities available at Mashouf Wellness center since it opened in the Fall 2017 semester. With a rock-climbing wall, pool and jacuzzi, multiple exercise rooms, basketball courts and an indoor olympic track, there is something for everyone.

Walk by room 105 on a Tuesday and you’ll find Mashouf’s best kept not-so-secret amenity. Students can now count virtual reality boxing and soccer among the offerings. And they’re free.

The virtual reality fitness classes are a partnership between the kinesiology department at SF State, Mashouf Wellness Center and the VR Institute of Health & Exercise, according to Aaron Stanton, the director of the VR Institute.

“We’re all working together to try to test out, to see whether or not people respond well to  exercise and virtual reality,” said Stanton.

There are seven warmup and cool down options to choose from and another five that are full-fledged conditioning programs. Session length is different for each game, as is the theme and objective.

Some are sports-based, like virtual soccer and boxing, and others are games like fruit ninja or beat saber, a music rhythm game that you beat by chopping blocks in time with music.

“The premise of VR exercise is that you can gain the same health benefits as exercising in other ways but with a much more varied, diverse experience,” said Stanton.

The VR director explained that unlike traditional forms of exercise like a treadmill, which he claims people start to use less frequently as time goes on, VR gives the user the opportunity to “refresh the experience.”

Students are set up with a headset, headphones and two joysticks. They also have the option of wearing a heart rate monitor that the kinesiology department is using to take notes about heart rate levels and the amount of exertion expended during the sessions.

Stanton touts VR as being just as good as any other form of exercise,and the VR program is collecting the data to back up the claim.

“People look at this as just games. It is an actual workout, there’s no difference between it and anything else,” Stanton said. “Games like boxing can be just as intense as real world boxing. We’ve clocked people’s heart rates and calories burned [that are] equivalent to riding in the Tour de France.”

Wellness Center manager and kinesiology major Nicole Hernandez, 23, noted that it is a  “different kind of person” that comes to the classes. As a Mashouf employee and a kinesiology major, Hernandez has had a unique opportunity to be involved with the program since it began at the beginning of the semester.

“We’re doing research on how VR can be another form of exercise, and how to hit another population to begin working out,” said Hernandez. “It’s been really popular with international students.”

Hernandez pointed out that there is more than one way to exercise, and this is just another option for people looking to do so.

“We’re definitely reaching out to a lot more people who would typically game,” said Hernandez.  “They come in here and we call them VR regulars because they are more familiar with the system and are able to navigate menus and start game play without help.”

According to Hernandez, the most popular program so far has been a game called Audio Shield. She describes it as “Dance Dance Revolution, but you play with your hands.” Players even get to pick their own songs to play to.

“VR is definitely more game-based-type exercise, so I think it just honestly draws a different type of person in,” Katie Rhodda said, a psychology major and colleague to Hernandez.

Hernandez and Rhodda said they have yet to identify a specific age group however.

“It’s great to have people coming into the gym that might not come otherwise and have a safe space where they feel comfortable.”

The pair said they were hoping to change the overall stigma around exercising to show being active can be done in many different ways.

Nicolas Pesei and Noah Stoffel, both 18, are frequent attendees of the classes. So much so that the friends let new participants in the class go ahead of them, so that the new players get to experience VR sooner.

Pesei, an avid swimmer, compared one class session to being as strenuous as a workout in the pool.

Stoffel doesn’t think of it as working out, or at least he doesn’t realize he’s doing so until he’s done, tired and sweaty.

“You’re done, you check and you’ve burned like 400 calories or something, because you don’t realize it, you’re just playing a game,” Stoffel said. “That’s what I like about it. When you’re working out on a treadmill you’re always watching the time, but when you’re playing the game you can go for like an hour and a half and it feels like two minutes.”

Stoffel thinks the vision of VR is to have users forget they are exercising. He points to game play and design to support his point. The rich colors and immersive game play are key factors in helping users do so.

The vision might be what’s driving users to use VR, and its popularity might just help VR Institute Director Aaron Stanton realize his goal of eventually seeing VR classes in every gym or fitness center.

“The way we see it, is that, there won’t be a gym in the United States that isn’t impacted in some respects by virtual reality or augmented reality in the next three to five years,” said Stanton. “You can do things in the virtual world that you simply can’t replace in real life, so we think that that’s enough to make it a game changer in the way people exercise.”

Katie Rhodda stated the goal more simply, “At the end of the day, it just feels good to see people exercising and having a good time with it.”