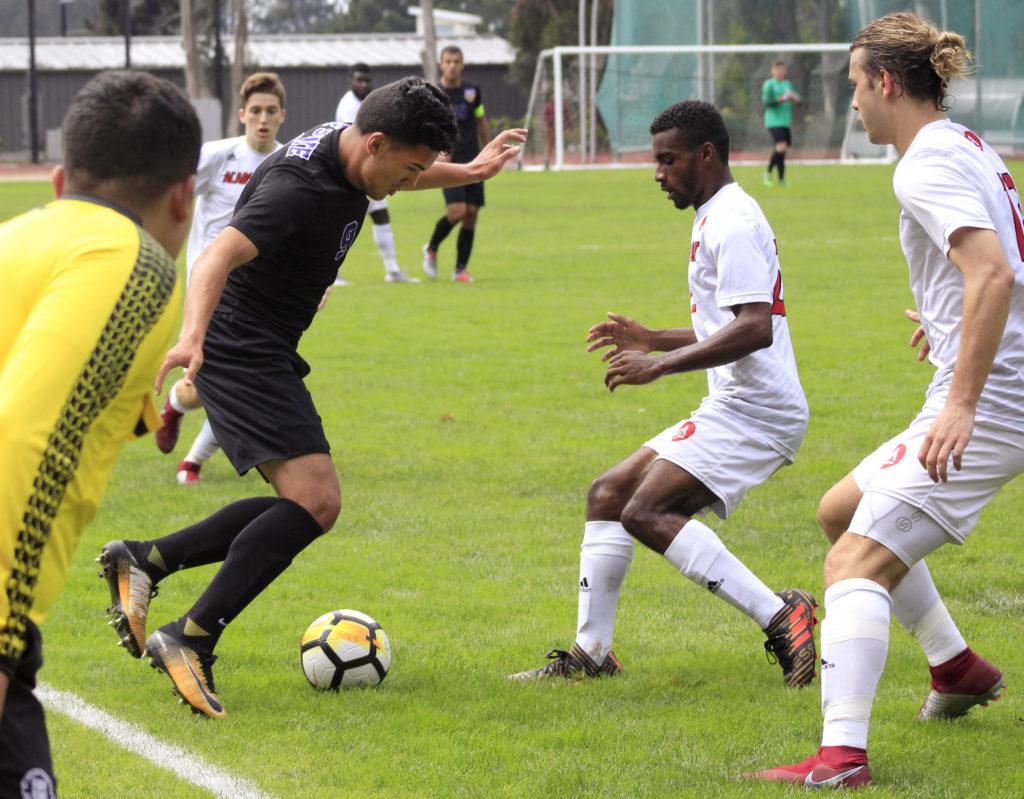 SF State player Feliciano Cardenas dribbles the ball through two Academy of Art players in their game against each other on Thursday, Aug. 30, 2018. (GoldenGateXpress/Lindsey Moore)

SF State men’s soccer stifled the Academy of Art University offense 2-0 in front of the Cox Stadium crowd for a victorious start to their 2018 campaign.

“Overall, I’m pretty satisfied with how we started the first match of the season,” said Javier Ayala-Hil, SF State head coach, about his team’s overwhelming defensive effort in the first half.

A little over the six-minute mark in the game, forward Moses Gutierrez (13) opened the scoring for SF State, capitalizing off a pass from Crinan Dunbar (4) and drilling the goal in from the left side of the field.

“I started from the back and I built it up from the middle,” said Gutierrez, a junior going into his second year on the team. He finished the game with two shots on goal.

After dominating the first half and jumping to a 2-0 lead, the game’s pace noticeably slowed down in the second half. It was a scoreless half where the Gators were plagued by penalties, committing eight of their 12 fouls in the second half. The aggressiveness that contributed to their first-half success was absent for most of the second half.

“It was a bit of a slower start,” said coach Ayala-Hil about the Gators’ performance in the second half.     “We knew that we were going to be making mistakes.”

But the barrage of penalties and a slower second half did not stop the Gators from shutting out Academy of Art and starting their season the same way they started it last year: in the win column.

There are no big differences between the current Gators lineup and the team that made the playoffs last season, according to Tariq Pulskamp (19) a defender and one of the Gators’ captains this season.

Pulskamp transferred to SF State last year and was one of the newcomers on what he believes was a successful team last year.

“Obviously we are missing a lot of our (last season’s) seniors, who helped out a lot, but the new guys who have come in have done a really good job,” Pulskamp added.

Even after a season where the Gators made the playoffs, Pulskamp says the goals are higher this year.

“We played a lot of high level games, and most of those players are back,” coach Ayala-Hil said when asked about the difference between this team and last season’s playoff team. “I think it just comes down to the experience of having gone through that last year, and now knowing what it takes to get there and beyond.”

The return of players with experience against high-end competition will be a very important factor in the team’s performance this year, according to Ayala-Hil.

“We got a pretty mature team,” coach Ayala-Hil said.

The Gators will face their first road test of the season against Notre Dame de Namur University this Sunday.