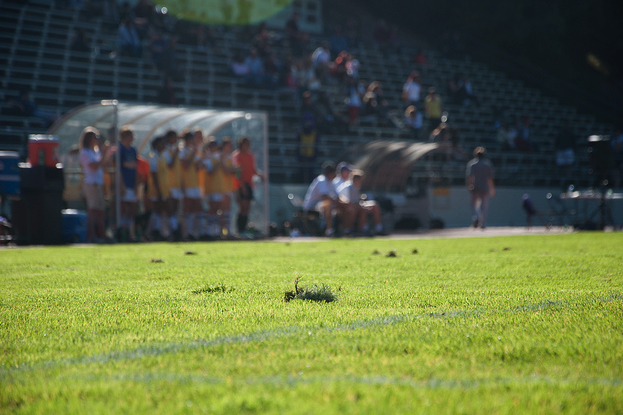 Every sporting field is built for fairness. The sidelines are all the same length. The baskets are the same height. The rules apply equally to all athletes. Most sports even switch sides of the field during the game just to be sure that there is no advantage given to either squad.

There is, however, an inequity that drastically affects the outcome of many of the contests that SF State sports teams enter.  Oftentimes, the Gators are playing from behind before they even lace up their shoes.

The disadvantage is money. There is a direct relationship between scholarship funds spent and wins on the field. SF State teams lose a competitive edge because they have a short stack of scholarship money, according to many involved in the athletic program.

“We’re competing against teams that are funded at a higher rate, so they’re getting the best players,” said SF State women’s basketball coach Dr. Joaquin Wallace. “If you can’t get the resources to be successful, how can you be successful?”

Imagine you’re an athlete. Two coaches sit in front of you. One offers a fantastic education in a world-class city that will cost you about $65,000. The other offers a comparable or slightly inferior education in a much-less appealing location, but it will cost you nothing. SF State coaches are often the former in this situation when they go recruiting. San Francisco may be the most desirable option, but it’s often the most expensive.

“We’ve lost tons of players because, at the end of the day, they say, ‘yeah coach I want to come there. I want to play for you, but San Bernardino’s gonna give me a full ride.’ What can you do about that?” Wallace said.

“We even, to raise money, we sell hot dogs and pizzas… we’re out there hawking stuff. We hustle and work all the time,” said Cathy McDermott, SF State athletics development assistant director of external affairs and development.

According to U.S. Department of Education statistics, the SF State athletic department gave out a total of $347,000 in grants to athletes for the 2009-2010 school year.

By comparison, Chico State distributed around $650,000. That difference is seen on the field. Both schools joined the California Collegiate Athletic Association in 1998. Chico State teams across all sports have captured a total of 36 CCAA championships. SF State has one – last year’s women’s soccer title. Four of the top five earning schools in the conference are also in the top five for CCAA championships.

“Let’s assume every school in the conference was equal (in money),” said SF State Athletic Director Dr. Michael Simpson. “Having an equal base doesn’t guarantee you’re going to win, but it guarantees you have a chance to win. But what if it’s unequal?”

Of the 12 schools in the CCAA, SF State ranks ninth in scholarship spending for 2009-2010, ahead of other struggling athletic programs like Cal State Monterey and Cal State East Bay.