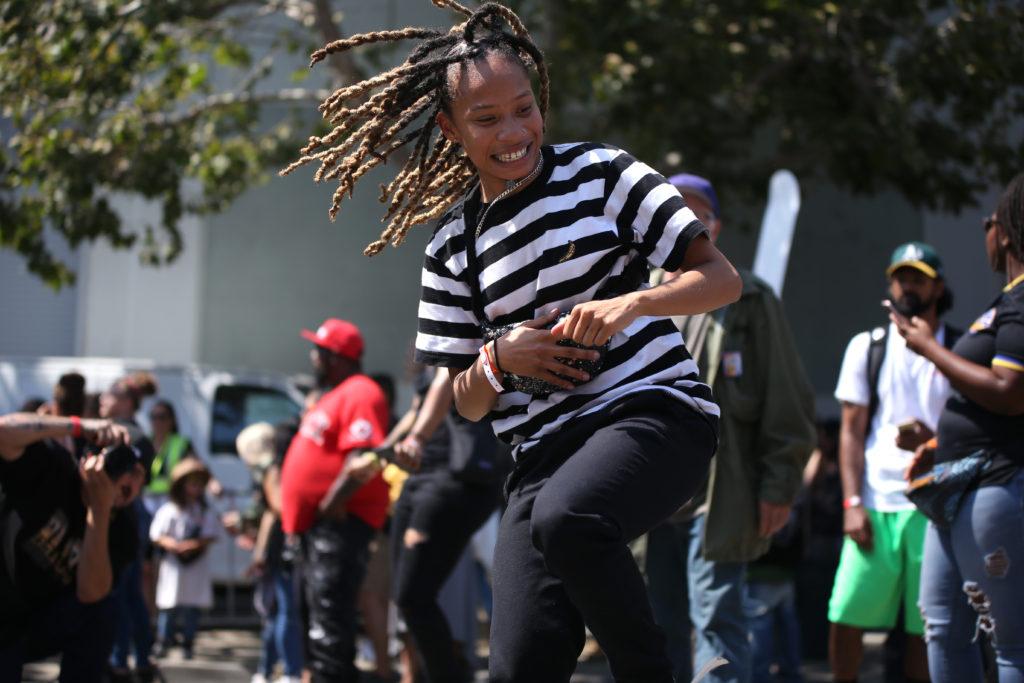 Hyphy beats, marijuana smoke and good vibes filled downtown Oakland this Labor Day as people of all ages from all over the Bay Area attended the seventh annual Hiero Day Music Festival, where hip-hop legends and up-and-comers celebrated the city’s culture and music scene.

The festivities kicked off at 11 a.m. on Monday, Sept. 3 — the same date it’s been hosted every year since 2012 — and real Bay Area hip-hop heads can tell you why that day is so important. The date (9/3) alludes to the Souls of Mischief’s 1993 album and title track “93 ’til Infinity,” an early Bay anthem about chilling with your crew.

Oakland’s own Hieroglyphics founded and hosts the large music block party to celebrate the Bay Area’s hip-hop culture and support local artists. The food, craft and merchandise vendors surrounding the three stages supplied attendees with all their festival needs, which included a beer garden that saw painfully long lines.

The Hiero Day website advised to leave any bad vibes at home. I would’ve also recommend leaving behind any personal itinerary of artists to catch. Set times and stage locations switched around quite a bit — but that didn’t seem to faze any attendees. Perhaps it was from the second-hand marijuana smoke sifting through the crowd like rolling fog that put everyone at ease, but more likely it was that go-with-the-flow Bay Area disposition.

If you missed the festival this year, don’t fret. Hiero Day will be sure to grace the Bay next year, from Sept. 3 ’til infinity.

Rapper Mistah F.A.B. hosted the main stage with Bay Area radio veteran Chuy Gomez to introduce notable acts, such as Richie Rich, Georgia Anne Muldrow, Talib Kweli, The Pharcyde, Black Thought and Hieroglyphics, who headlined the show. An Oakland native and community activist, Mistah F.A.B. discussed how crucial it is to not let anyone’s negativity get the best of you and not to worry about what others think. Beyond his real talk, Mistah F.A.B. surprised attendees with a performance of one of his hit singles “N.E.W. Oakland” off his 2005 album “Son of a Pimp,” to which the crowd went properly hyphy to.
After an emphatic introduction by Mistah F.A.B., Georgia Anne Muldrow took to the stage preaching gratitude and naming Oakland as one of her “most favorite cities of all time.” It seems whenever Muldrow sings in her raw and soulful fashion, she’s making a rebellious statement. At one point she began crooning the line “187 on the slave master,” getting others to chant along with her. The term “187” is common hip-hop slang for murder, referring to Section 187 of the California Penal Code that defines the crime. There’s a reason AllMusic described her as “one of the most daring and important (albeit underappreciated) artists of her time.”
Rap trio Durag Dynasty (which includes Fresno rapper Planet Asia, Killer Ben and TriState) produced one of the most animated sets I saw at the festival, getting the crowd jumping in unison to their fun rhymes and energetic flow. The group only has one full-length album, “360 Waves,” but it’s definitely worth a thorough listen. They rap with clever wordplay and bold style over jazzy synth beats. It’s not surprising the rhythm and flow plays so well considering that prominent producer and rapper The Alchemist produced the trio’s full album. While I’m eagerly hoping for a new album from Durag Dynasty, I recommend catching them live, as they’re sure to deliver as hard as they did at Hiero Day.
If you’re looking for your new favorite rap duo, Blimes Brixton and Gifted Gab (aka B.A.G.) should be it. These two stunning women absolutely killed their set at Hiero Day, and they were perhaps my favorite act of the whole day. Brixton’s fast-spitting rhymes complimented Gifted Gab’s melodious rap verses, producing hip-hop that was pleasurable as it was real and raw. They spat freestyles about body positivity, independence and respect before closing out their set singing “Happy Birthday” to their disc jockey, DJ Dubplates. Amazing rappers in their own right, B.A.G. is a match made in hip-hop heaven, so keep your ears out for this soon-to-be iconic duo.