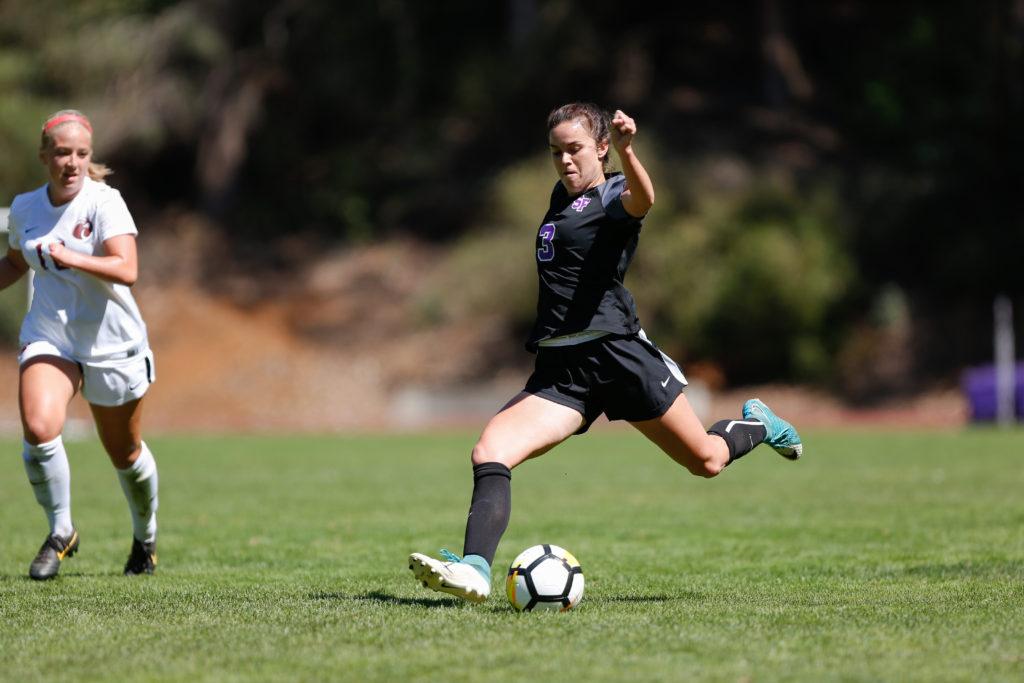 The Gators fell to the Seattle Pacific Falcons 4-1 on Saturday, Sept. 8 in a physical match that was played with no scoreboard thanks to the campus power outage.

The entire campus experienced a power outage during warmups, affecting the pre-match routine of the Gators with no music or lineup announcements. Time was kept on the field with no working scoreboard and many other aspects of the game were affected due to the power outage.

“Normally we keep the stats in the press box but today we had to do it on the field,” said Brandon Davis, the associate director of athletics for communications and fan development at SF State.

“It was kind of weird,” said sophomore forward Tami Kwong. “I think it did mess us up because we usually listen to music before the game, and I like to look up at the scoreboard to see how much time is left.” She could not recall ever playing a game during a power outage.

The physicality escalated after SF State goalie Nicki Rucki was hit in the face during a scramble for the ball that had Rucki laying on the ground while Makayla Sonstelie scored Seattle Pacific’s first goal in the third minute. Play stopped while the training staff evaluated Rucki, but she remained in the game and played all 90 minutes.

“After seeing our goalie get kicked in the face, we wanted to play hard for her because she always plays hard for us,” Kwong said.

Both teams were issued a combined 17 fouls and two yellow cards, with Daesha Harper from SF State and Sophia Chilczuk from Seattle Pacific getting booked.

SF State head coach Tracy Hamm said they were expecting a physical game. Hamm complimented her team for battling throughout, but she felt the team gave up two soft goals and this put the team down early, forcing them to make adjustments.

After surrendering a corner kick goal, the third allowed by SF State in three games, the Gators quickly answered with a goal from Kwong at the 26 minute.

The Gators were able to keep up the physicality and possession during the first half, heading into halftime down 2-1. But in the second half, Seattle Pacific took control. The Falcons scored two goals, including an empty net goal by Chilczuk for her second of the game.

“I think we just lacked some maturity, and lacked some accountability,” Hamm said about the Gators struggles in the second half. “[SPU] has a lot of returners so I think they just played a smarter second half than we did,” she explained.

“Even down 4-1 I felt we battled down to the very end,” Hamm said. “I was impressed with some of the players that came off the bench. I thought they added a different perspective and some new energy.”

SF State’s next game is on Tuesday, Sept. 11 when they host Holy Names University. Then the Gators have four straight conference road games, beginning at Sonoma State University on Sept. 14.

Heading into the game on Tuesday, Hamm wants the team to play with more composure and be more organized when defending set pieces. The head coach also wants the team to improve on their communication and finish their scoring opportunities.