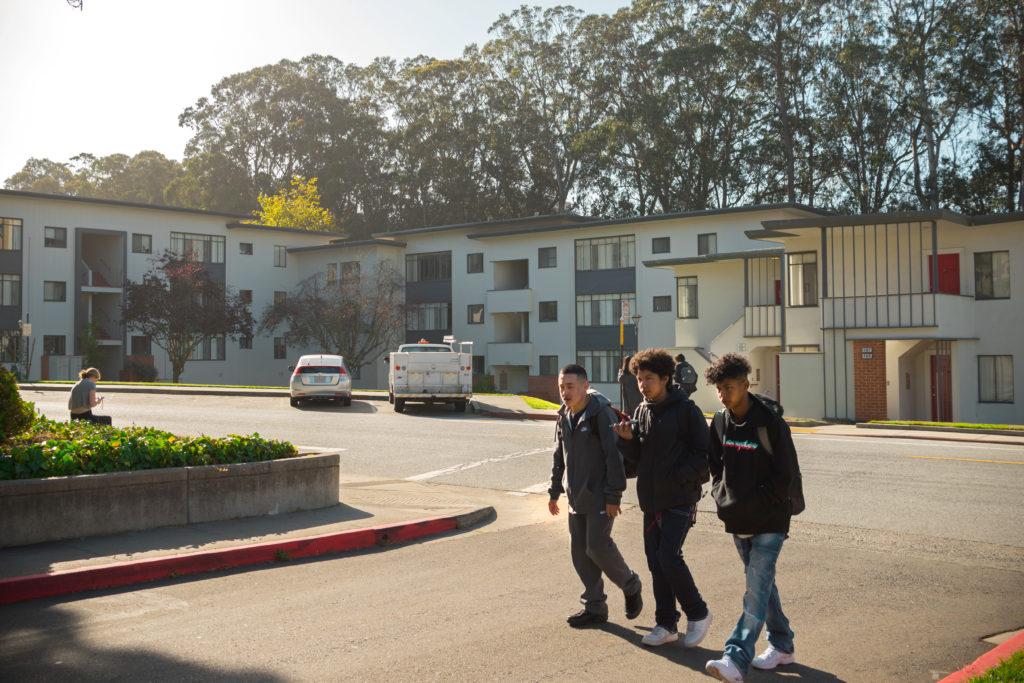 Pedestrians cross Buckingham Way in front of the proposed location for a 400-room hotel and conference center at SF State on Wednesday, Sept. 19, 2018. The new hotel is part of the Future State Vision Plan to renovate the campus and would generate profit for the university. Portions of student housing at University Park North would need to be demolished to make way for the hotel project. (Chris Robledo/Golden Gate Xpress)

SF State aims to get into the hotel business within three to five years, yet several crucial questions still remain over how to make the enormous campus public-private partnership project happen.

During the March 27, 2018 SF State Foundation board meeting, University President Leslie Wong said he would like to see the 400-room hotel and conference center up and running in three to five years.

Wong told the board that hoteliers are now asking to partner up and help finance the hotel’s construction cost of possibly tens of millions of dollars. So what will the partners get out of the deal? That’s still unclear.

“It is too early to tell at this early stage,” said Jason Porth, vice president for University Enterprises at SF State.

The financial gain for the university would be lease payments for the land and a portion of hotel revenue, Porth said. The revenue would help to offset the cost of massive construction projects planned over several years for the rest of the campus.

It will take two years to build the structure, according to Porth, which means planners could be ready to break ground as early as a year from now. Yet there’s no cost estimate either.

SF State can only say for certain that the proposed location would be Buckingham Avenue near Stonestown Galleria and the proposed number of rooms will be 400.

Builders would have to break ground within one to three years to fulfill Wong’s hopes. And before that can happen, low-density housing currently at the site will have to be demolished. Those spaces will be replaced by high-density housing elsewhere on campus, Porth said.

Despite the looming timeline, it’s normal for a project of this size to have such questions remaining at this point in the process, Porth said. And yet, there’s still much to do.

“There is an enormous amount of planning that takes place on the campus level, including things like market demand studies to make sure that we can in fact make this profit pencil,” he said. “It’s a long process with many opportunities for campus input.”

As for choosing a partner, Porth didn’t specify what exactly the criteria would be or who exactly would be involved in the decision making.

However, he said, prospective partners would be vetted on “objective elements by a committee comprised of representatives from all facets of the campus community.”

The new hotel is part of the 18-year Future State Vision Plan to modernize campus facilities. The plan has already seen the construction of the Mashouf Wellness Center, and the demolition of student housing on Tapia Drive to make way for the new Liberal and Creative Arts Building.

Susan Roe, SF State hospitality and tourism management chair, said the department has long been excited about the student training and classroom possibilities with a proposed hotel on campus.

“We are hoping for a good partnership with a notable hospitality brand that can help to build and establish a hotel on campus,” Roe said.

“It would give students a perspective on how that industry will work once they finish college,” Cruz said. “At the same time, I feel like SF State can use the money that will be spent on this big project into efforts in other departments that are lacking, or other components of school that could use the funding.”

Other campuses across the California State University system, most recently Cal State Northridge, have invested in public-private partnership projects like hotels to boost revenues during a lack of adequate public funding.

According to Cal State Northridge’s hotel project website, a public-private partnership is considered low-risk because no university funds will be used.

The university made headlines last year after announcing that it will be working with the Hyatt hospitality company. But that partnership is no longer moving forward, according to Carmen Ramos Chandler, director of media relations at Cal State Northridge. Ramos Chandler didn’t elaborate on the reason why. No new partner has been named.

“I am afraid there isn’t much to say. We’ve re-issued the RFP (request for proposal) for the hotel project,” Ramos Chandler said. “And since proposals are still coming in, we really can’t say anything at the moment.”