Eminem vs. MGK beef shows no signs of slowing down 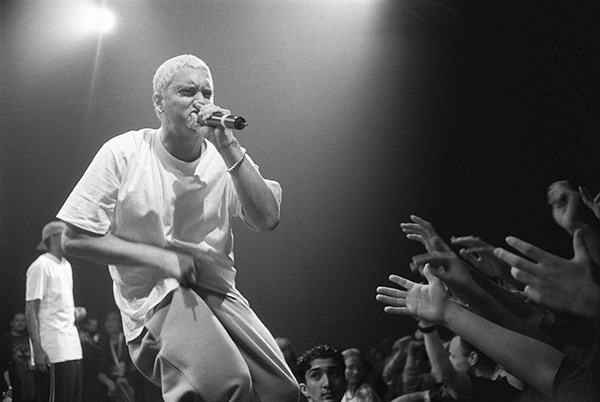 Eminem is not backing down from his feud with Machine Gun Kelly. (Courtesy of Wikimedia Commons)

There are always celebrity feuds occurring in Hollywood, but the most recent; and most entertaining has been between Eminem and Machine Gun Kelly. Otherwise known as MGK.

Since Eminem has dropped his phenomenal album, “Kamikaze,” he has reportedly taken shots at MGK with his song “Not Alike.”

The beef all began in 2012 when Machine Gun Kelly saw a picture of Eminem’s daughter, Hailee, then proceeded to call her “hot.” Kelly released his song “Rap Devil” on Sept. 8, which was eight days after the “Kamikaze” release.

In Kelly’s jab at Eminem, he says that he has a “weird beard” and “the real Slim Shady can’t stand up.”

Students here on SFSU campus and Bay Area locals alike had some thoughts about this ongoing beef.

“Eminem is the original, and his lyrics make sense. Not only that but he writes his lyrics,” said Bay Area resident, Rijeana Pica.

According to LAD Bible articles, more people swarming into the site have taken Eminem’s side than Machine Gun Kelly’s.

Predictably, MGK’s devoted fans say that Eminem needs to “give it up” and “he’s getting too old.” Eminem quickly released his new single and diss track “Killshot,” in which he responds to MGK. With lyrics such as, “I’m 45 and still outselling you,” and “Know your facts before you come at me, you little goof.”

Machine Gun Kelly was quick to fire back with a picture on Instagram of him on stage saying “He Missed.” This was referring to the name of the song “Killshot.” The only funny thing about MGK’s picture is that he is not headlining any arenas; in fact, he is opening for Fall Out Boy.