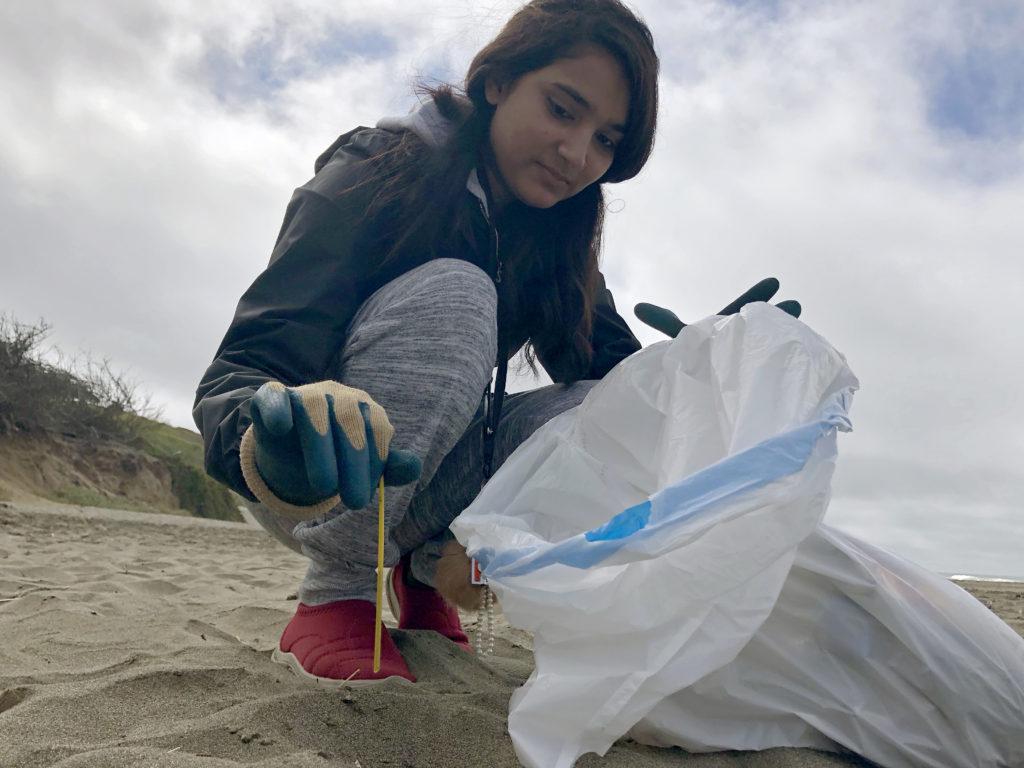 SF State student Sawara Bhattarai picks up a straw at Fort Funston during the California Coastal Cleanup day on Saturday, Sept. 15. Along with 10 other students, Bhattarai went on this volunteer trip that was a part of the SF State campus recreation program’s month-long welcome-back campaign. (Brian Vu/Golden Gate Xpress)

Eleven SF State students decided to not sleep in last Saturday in order to participate in the California Coastal Clean-up Day at Fort Funston.

The beach at Fort Funston Park buzzed with activity as dogs and their owners played catch, and friends and families placed litter into garbage bags. Overhead, thrill-seekers soared through the sky on hang gliders.

SF State student Sawara Bhattarai was on hand to pick up trash because, she said, she felt the environment was being degraded. She also dragged her roommate, Aminah Abdullah, out with her.

“It’s a nice day!” Bhattarai said. “We should all come out and clean the beach. Save the environment!”

The volunteer trip was a part of the SF State Campus Recreation program’s month-long welcome-back campaign for students, which runs until Oct. 5. Pam Su, Campus Recreation director, organized the trip and guided the students, who showed up at the Mashouf Wellness Center bright and early at 7:30 a.m.

“We wanted to do a service trip as part of the back-to-school activities,” Su said. “So we contacted our local organizing area and they let us know that near San Francisco, this area was a place that needed volunteers.”

Every piece of trash that the students pulled out of the sand and placed in a bucket — from plastic bottle caps to pieces of Styrofoam — was accounted for on a list.

“We’re having them tally very specifically the kinds of items that they find and at the end of the day,” said Jaclyn Lim, assistant project manager for the Golden Gate National Park Conservancy. “All of that information is often used to drive legislation like plastic bag bans and plastic straw bans.”

The largest culprit are cigarette butts. From 1988 to 2016, seven million cigarette filters have been picked up on coastal clean-up day alone. That’s 35 percent of the total trash.

The statewide event started in 1985 when California was inspired by Oregon’s 1984 clean-up event, Plague of Plastics. About 2,500 people participated in that inaugural event.

The 2018 statistics have not been released yet by the California Coastal Commission.