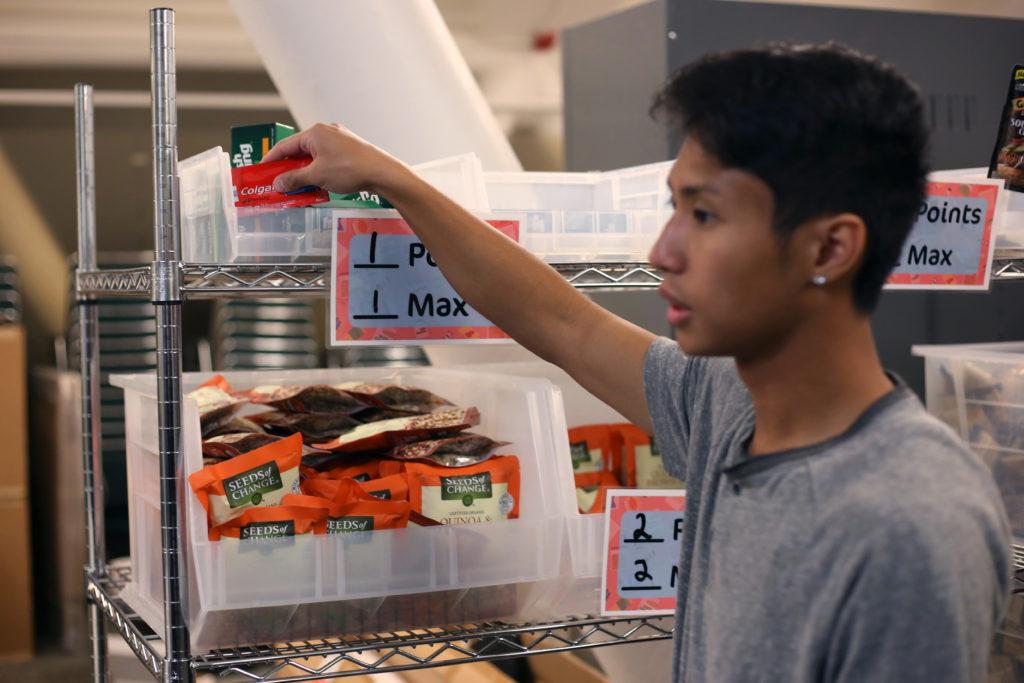 Asian American studies major Nathaniel Roque picks up a towelette in the Pyramid room where the food cupboard is held, next to the Jack Adams Hall in the Cesar Chavez Student Center on Wednesday, Sept. 19. (Christian Urrutia/Golden Gate Xpress)

Thousands of SF State students do not get enough to eat on a day-to-day basis, according to a recent report. Associated Student, Inc. is trying to address their needs, but they say the university is dragging their feet on the issue.

Monica DiLullo, ASI vice president of facilities and services, helped develop a resolution last spring titled “Associated Students of San Francisco State University Resolution Supporting the Creation of a Permanent, On-Campus Student Food Distribution Center.” In it, the ASI and University Corporation Board of Directors promise to work together to establish a central and permanent location for a food pantry by Fall 2018.

Vice President of Student Affairs LuoLuo Hong or President Les Wong were also expected to issue a statement committing to work with ASI and the student body to create a food pantry by May 2018.

“It feels like nothing is developing,” DiLullo said. “I have asked several times what the timeline is that we’re working on with administration […] I haven’t received a direct response from the university’s side.”

The administration cited a few reasons for the delay, such as the possibility of extra funding coming from grants, from “hunger-free campus designation,” from the University Corporation and from the SF State Foundation.

“It was really was trying to line up the various pieces: funding, the architect, the planning group,” said Gene Chelberg, associate vice president for student affairs. “The summer got away from us, that’s why we worked with AS to expand their offerings.”

University Corporation also delayed a September vote on the future of a permanent space while Chelberg was on vacation.

ASI relaunched and expanded its Gator Groceries program on Sept. 12, adding a food cupboard to the already existing pop-up pantry and expanding its outreach efforts.

Efforts to provide a pop-up pantry began in 2014, according to ASI Environmental Resource Director Jack Steinmann.

“A few members of the ASI Board of Directors said we should have a food pantry,” Steinmann said. “They teamed up with the ASI production team and Horace Montgomery, director of productions and services, and they set up a partnership with Marin Food Bank.”

The pop-up has been up and running since 2016 but was recently rebranded as Gator Groceries. ASI students have been fighting for a permanent location and refrigeration, among other needs listed in its resolution.

“It will take time to implement. It’s not going to happen by the end of the semester, but these are things with big institutions that take years to fully develop,” said Joseph Penner, a Gator Groceries volunteer.

However, Chelberg has a more optimistic timeline for the project.

“We’re optimistic that it might open this semester, and in the meantime, we’ve worked with Associated Students to expand the program. We’re committed to work on addressing basic needs on campus,” Chelberg said.

Currently, Gator Groceries offers produce, bread and other grocery essentials on Mondays from 12:30-3 p.m. at the Center for Student Life at The Annex, as well as a food cupboard, which includes snacks and dry food, on Wednesdays and Thursdays from 1-7 p.m. at Jack Adams Hall.

A report released by SF State administration in Spring 2018 indicates that about 46 percent of students are experiencing some form of food insecurity, which is defined as “the limited or uncertain availability of nutritionally adequate and safe foods, or the ability to acquire such foods in a socially acceptable manner.”

“Food insecurity is something that, as students, we’re all thinking about,” said Lizzie Mata, a business major in line for Gator Groceries on Monday. “Especially since the cost of living in San Francisco is so high compared to other places.”

ASI has struggled to meet the needs of such a high number of food insecure students while also struggling to get the word out about the food pantry.

“It’s making sure as much as possible that the folks of that 45 percent know that we have this program,” Penner said. “Based on our numbers, they don’t. We only serve a couple hundred [on Mondays]. There should be thousands of folks. We have leftover food every single time.”

That may be because there’s stigma around accessing the food pantry, said student coordinator Diana De Rueda.

“College students know free is better, but there is still power to that shame in accessing free things,” De Rueda said. “The concept of ‘free access’ has always been stigmatized and has always carried an element of shame. The goal with this program is to eliminate that stigma [and] make Gator Groceries the smart place to come.”

The rebranding from Pop-up Food Pantry to Gator Groceries was an effort to destigmatize the service. The effort seems to be working. De Rueda said the addition of the food cupboard brought more participants to the newly dubbed Gator Groceries, with more than 100 participants in the first two hours of opening their doors.

Additionally, the survey link attached to all online ads for Gator Groceries does not make students prove their low-income status. De Rueda said organizers hope to make students realize that the groceries are available regardless of income status and simply by virtue of being a student.

A permanent space for the food pantry could also address availability issues as well, according to students who accessed the service.

“It was a little challenging to come down here, especially during the summer since they only had it on Mondays, especially if you’re commuting,” said Daisy Ruiz, a criminal justice major. “If they were to have a regular area with someone working there so you could come in any time within the week, it would help.”

Every school in the California State University system is part of the Basic Needs Initiative, which works with individual schools to address problems such as hunger throughout the larger CSU system.

Besides Gator Groceries, SF State has other programs under the Basic Needs Initiative to address insecurities, such as assistance in enrolling in CalFresh.

CalFresh is a supplementary food program and the current resource for SF State food-insecure students. CalFresh requires an application, which differs depending on what Bay Area city a student comes from. Additionally, undocumented students are not eligible for CalFresh.

“The CSU is the first public university system in the nation to conduct extensive research on student food and housing security with the aim of developing solutions that will enable students to succeed and graduate,” said CSU spokesperson Elizabeth Chapin.

“Those funds will be distributed to campuses to help them expand basic needs support for students,” Chapin said.

Fourteen of the 23 CSU campuses have already established food pantries open multiple if not every weekday.

Steinmann states that when the resolution is actually put into place and the administration meets their promises, this will be a big step for Gator Groceries, but knowing when the renovations are going to be finalized is hard to predict.

“Once the renovations are finalized, Gator Groceries will be accessible every day campus is open,” Steinmann said.

In hopes of a timely establishment, Gator Groceries desires to be an area where students serve students, grocery by grocery.