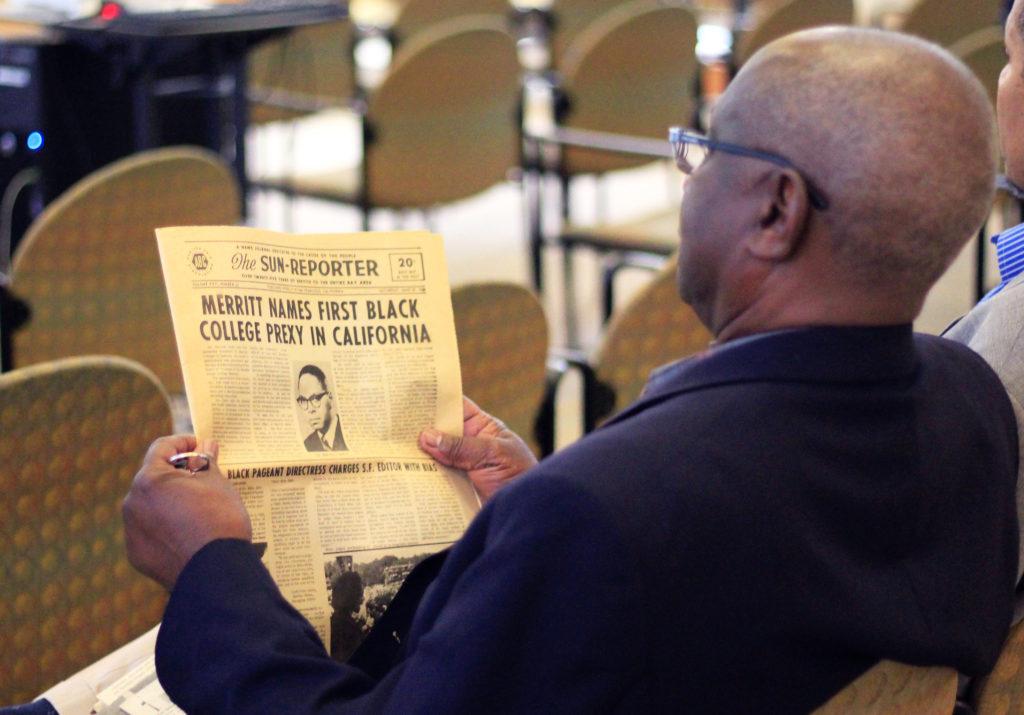 The 1968 SF State student-led strike holds tremendous historic significance as the first — and longest — in a wave of campus-wide strikes across the nation during that era of protest.

“I walk across the campus and before you know it, there was the tactical squad with the head gear and the boots and the billy clubs, and the cops on horses,” said Carolyn Thomas-Wingate.

“They formed a big circle. I saw people running, getting out of the circle, breaking through the line, and I’m like, I’m stuck. So I was arrested that day in a mass bust.”

She and 40 others girls were strip-searched and shoved into a cell. And when one girl lit up cigarette rolling paper, they were blasted with a fire hose.

“People were flying up against the wall and all over the place,” she said. “But we were confined to a cell. Somebody had a miscarriage and somebody broke a leg.”

The panel of septuagenarians gathered to commemorate the strike’s 50th anniversary and to listen to a reading from Juanita’s latest book, “Homage to the Black Arts Movement: A Handbook.”

It was apparent by the nods and laughter that several of the approximately 40 people in the audience also had intimate knowledge of the events that transpired at SF State during that era.

As students then barely out of their teens, they became warriors for civil rights as well as members of the Black Panther Party.

“We were the Party on campus,” said Juanita, the Black Panther Party Newspaper editor-in-chief at the time. “We came armed — literally and politically.”

Although Garrett was gone by the time the strike occurred, he was roundly acknowledged as the spark in the rise in social consciousness at SF State.

“Jimmy Garrett pretty much lay the foundation for the Black Student Union at San Francisco State and the activities that the rest of us engaged in,” Juanita said.

“That was the real leadership,” he said.

Garrett said he intentionally enrolled in the university in 1967 not to get an education, but to recruit people into the Civil Rights cause.

“The goal was to take over the campus, so we took the campus by conversion or coercion,” he said.

He said he planned to get black students enrolled at the university “as a base to train a cadre for the purpose of building skills and developing human capital, who could go back into the community and prepare our people for protracted struggle to overthrow the United States.”

Garrett said he began fighting for Civil Rights very early on while growing up in Texas and Louisiana.

“I grew up under apartheid,” he said.

He participated in historic sit-ins across the South as a 15-year-old, and joined the 1961 Freedom Riders who faced physical violence and death threats to travel to the South to fight racist Jim Crow laws. He attended high school in L.A. and soon became a member of the Student Nonviolent Coordinating Committee, training under Civil Rights legends like Bob Moses, Dorothy Healey, Ruby Doris Smith-Robinson, Prathia Hall and Jim Foreman.

Garrett brought their ideals to SF State intending to create a Black Studies program that would “consolidated our political education and cultural education,” he said.

That program transformed into today’s College of Ethnic Studies at SF State, and became a founding model for several other academic institutions.