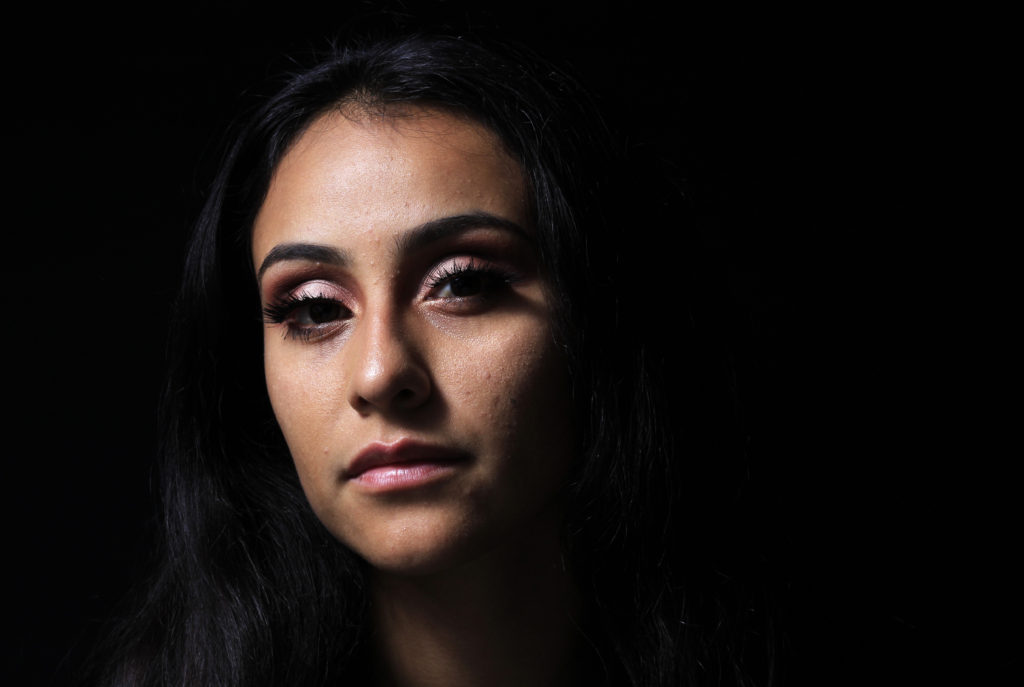 Yaritza Martinez poses for a portrait in the humanities building at SF State on Thursday, Sept. 27, 2018. (Lindsey Moore/Golden Gate Xpress)

According to the Dream Resource Center, SF State has 500-700 undocumented and DACA-receiving students who are still waiting on the current presidential administration and judge’s’ decision regarding DACA to realize the fate of them and their families’ lives.

President Donald Trump moved to phase out DACA over a year ago on Sept. 5, 2017. DACA is a program for undocumented people who came to the United States as children, allowing them to defer deportation for two years. The program began six years ago and provides recipients with work authorization and the ability to receive schooling.

In the past year, Trump’s efforts to abolish DACA have been halted by federal judges. Recently, both conservative and liberal judges have been denouncing the administration’s push to end DACA. Judge Andrew S. Hanen, a conservative of the Federal District Court in Houston, announced on Aug. 31 to the surprise of many that DACA should be upheld.

Larry Salomon, long-time lecturer of race and resistance studies in SF State’s College of Ethnic Studies, recognizes the feeling of weariness in his students.

“The latest news is encouraging compared to the beginning of the year. There’s a sense of relief, but it’s not a complete exhale,” Salomon said of recent judges’ decisions.

“I was just meeting with a DACA student and she was so close to leaving campus last year,” Salomon said. “[…] I told her, ‘Let’s ride it out.’”

The SF State student population has its fair share of DACA students. Maria Gavaldon is a 21-year-old senior at SF State who began receiving DACA when she was 15.

“At first it was really hard when they rescinded it. I think it took a toll on me mentally. Last semester was my worst semester,” Gavaldon said. “I failed a class, because I felt like I had no motivation anymore. I was thinking, ‘I’m getting a degree for what? They’re going to take it away.’”

Although DACA is still in place today, recipients and other undocumented students are continually worried about their family’s and their own status since the fate of DACA is undetermined.

“Now I’ve established myself better. I have a really good network at home and at school,” Gavaldon said. “The DACA situation still upsets me though. It’s frustrating when people who are paying for immigration attorneys don’t even know what’s going on.”

She notes that although she has suffered mental and emotional trauma from the administration’s decision, undocumented students have it worse because they have no status. She reiterates that there are many mixed-status families with both DACA recipients and undocumented people.

Norma Salcedo, AB 540 Dream Coordinator at the SF State Dream Resource Center, has been at the forefront of students’ emotional distress and new developments regarding deferred action.

“As an educator I have noticed a growth of fear and anxiety in DACA students since DACA was rescinded,” Salcedo said. “For students without DACA, it’s even an increased fear because they don’t have that protection of DACA, they don’t have an employee card to work, so they’re wondering what they’re going to do after college.”

Additional problems amount when undocumented and DACA-receiving students are not as eligible for financial aid, scholarships and on-campus jobs.

Yaritza Martinez, a junior at SF State, began receiving DACA at 15-years-old. Martinez emphasizes the immense difficulties that came with moves to rescind DACA last year, aside from the mental effects. Martinez paid $4,000 out of pocket to continue schooling in the Spring 2018 semester as her DACA renewal caused problems.

“Being a DACA student is really hard because we don’t get as much money from FAFSA like others do, just the way that scholarships are not as open for us to do them,” Martinez said.

Gavaldon discussed how faculty at SF State are not always friendly when students are going through issues with DACA. Salomon also thought there should be changes within the faculty.

“Faculty need to be as responsive around undocumented students’ issues as we have evolved to become responsive around things like safe places, sexual violence, domestic violence, which haven’t always been on the forefront, but now all faculty put something in their syllabus about this.” Salomon said. “I think we’re a little slow to come to the language around undocumented support.”

The Dream Resource Center is an environment that provides support, resources and references to students navigating the complicated immigration system. The center also offers updates to students on the status of DACA.

Upon the announcement last year of the administration’s move to end the deferred action program, the Dream Resource Center held healing circles for students.

“We provide a space where students can come and feel supported and valued. They can come and get resources, hang out, gather information of how to navigate campus procedures or policies that may be impacting them differently because of their U.S. status,” Salcedo said, emphasizing that people of all statuses and backgrounds welcome.

SF State provides resources to students, such as references to lawyers, guides to understanding legislation and IDEAS, a student organization for undocumented students.

The sense of community at SF State seems to have kept students strong.

“I’m proud of the fact that we have institutions within institutions, like Ethnic Studies, METRO, EOP and Dream Resource Center, for example. That’s the thing that kept them sane these past 18 months. It’s the one thing that allowed people to say they’re not alone,” Salomon said.

DACA students wished to get the message across to others that guilt isn’t enough — action is required to protect the DACA program.

“I still want to be able to do the same thing as other students. Give me the same opportunities, don’t always feel sorry for me,” Gavaldon said. “There’s always a narrative of ‘Oh, this poor undocumented student.’ Yes, there are mental health obstacles I have to deal with, but at the end of the day I’m still a student.”