“All Together Now” celebrates community and collaboration in Fine Arts Gallery 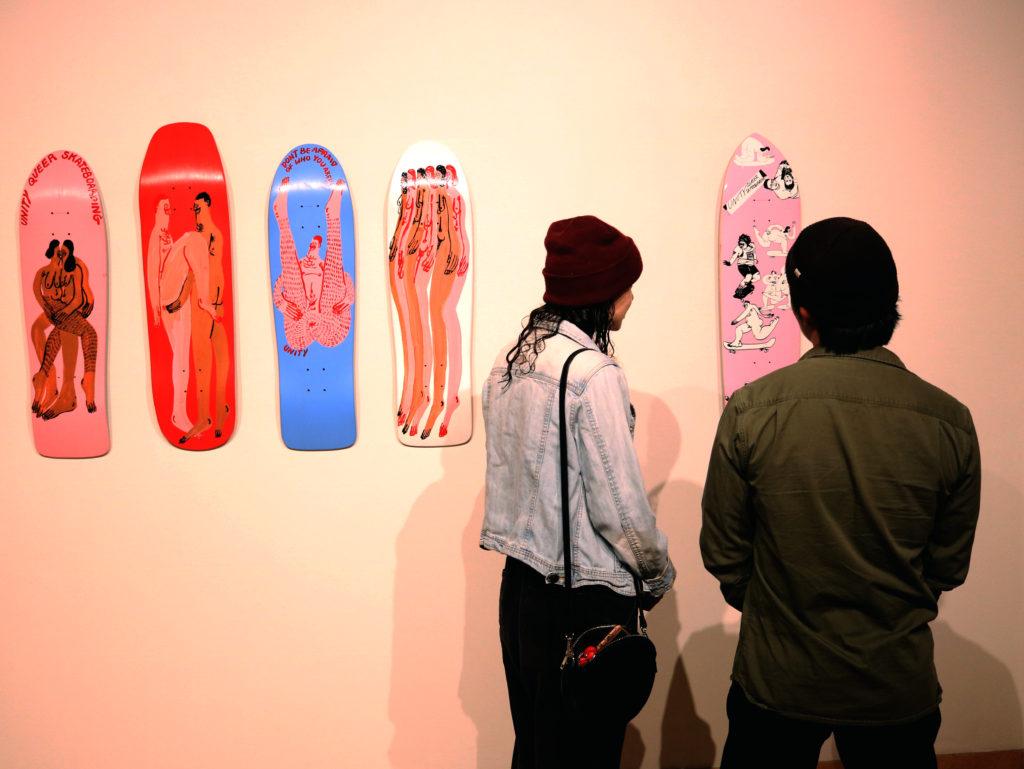 Artists and members of the public and the SF State art community gathered at the “All Together Now” art exhibition’s debut in the Fine Arts Gallery on Saturday, Sept. 22, where they celebrated community.

The gallery’s purpose is to “celebrate community as a means of resistance,” according to the Fine Art Gallery’s website. Artists supporting this purpose featured socially active pieces in various mediums. This also included interactive pieces where guests can contribute to a couple of the artist’s work.

“I think everyone is an artist in their own way, and so it’s nice to make that be an accessible project for everyone,” Wilson said.

Since graduating, Wilson has been an artist in residence at the De Young Museum and was invited by one of the “All Together Now” curators, Kevin Chen, to display her art at the gallery.

Among her other work displayed in “All Together Now” is a project called “Protest Curtains,” which include protest banners that one can hang as curtains in front-facing windows, but can also be taken to rallies to empower and spread positive messages to communities.

“We’re all in this struggle together so I see art as a way of uniting people, and bringing folks together, too,” Wilson said.

Students of the art department’s exhibition design class helped plan “All Together Now” by picking out artists and work they admired to feature. Some students contributed to the interactive pieces during the exhibition’s debut.

Charlotte Beck, junior and studio art major at SF State, is one of the students who is taking the exhibition design class. Taking this class and being involved with the gallery has helped her as an artist.

“It’s made me think about my art in a different way because the amount of care that really goes into caring for this artwork,” Beck said.

Rodney Solis, a senior in the studio art department, also contributed to “Together We Are Stronger,” and supports the importance of community that the artists have brought to “All Together Now.”

“I think when you’re using other people, and you’re using a community, and using a culture and a tight group of people — it does bring people together,” Solis said.

During the exhibition’s debut, a vocal ensemble Future Chorus performed. The ensemble sings original and cover songs for political movements in the Bay Area.

Sharon Bliss, one of the curators for “All Together Now,” is both excited and empowered by the exhibition’s debut.

“When we were organizing it, we called it the hug before the raised fist,” Bliss said. “I think that’s what today is, today is the hug but we’re all ready to go forward with our fists raised.”

“All Together Now” will be in the Fine Arts Gallery until Oct. 25 and is open on Tuesdays-Fridays from 11 a.m. to 4 p.m. The exhibition is free to attend.