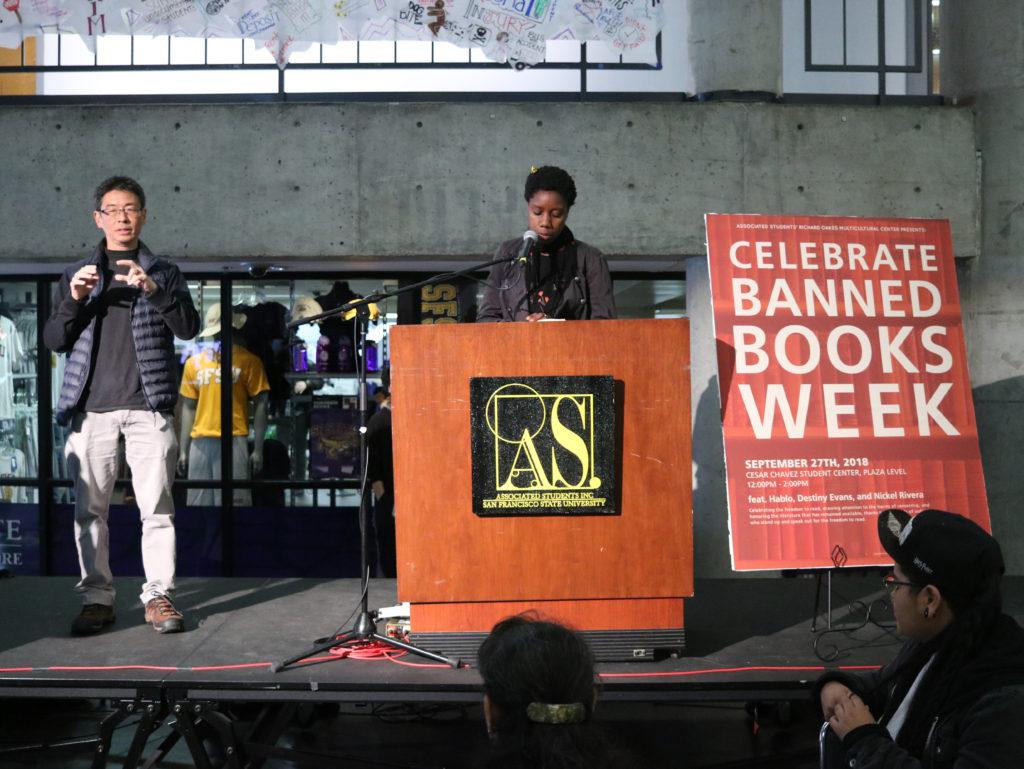 Through the power of spoken word and dialogue, students and performers honored challenged literary works and expressed their thoughts and emotions on topics such as femininity, race, gender, sex, power systems and homelessness.

The Associated Students’ Richard Oakes Multicultural Center celebrated banned books week on Thursday, Sept. 27 with performances from Hablo Rodriguez-Williams, Nickel River, Izobella Biala and Destiny Evans, along with book readings from those who wanted to join in. Free buttons, pens, postcards of murals and bookmarks of revolutionary thought were available for those who wished to express their views in the form of trinkets. Prizes were given out to those who were brave enough to read an excerpt from a book of their choice.

“The important thing about today is that we still have to remember,” said event organizer Evodie Bieni, “Every literary work presented here has a meaning and a message, and today is dedicated to letting these books speak for themselves.”

Bieni is one of the many ROMC organizers who helped set up the performances.

“Don’t tell me what to eat, wear, say, fuck, acknowledge, smile at, respect, worship, use for methods of healing, listen to, read, write, be angry about, watch, fight, permit, destroy, yell about,” Rodriguez-Williams expressed as he read an excerpt from “Femme Rage is Fucking Valid.” “Don’t tell me shit, especially if you ain’t shit.”

Rodriguez-Williams, a freelance writer and a self-described giggly revolutionary, has been published in Huffington Post, La Bloga and Rooted in Rights. Rodriguez-Williams is a strong advocate for disability rights for queer and trans people of color, and the unapologetic queering of femininity.

“My works are a testament to my own valid race and sadness,” Rodriguez-Williams said.

Sign language interpreters were also present, actively signing alongside speakers during their dialogues.

Destiny Evans, a black, queer storyteller and poet from Oakland, who describes herself as sometimes socially awkward, performed her works “Summer” and “Things to Never Say on a First Date.” Biala shared works from her scene “Act Like a Lady,” which included topics such as the intersectionality of her own gender, race and sexuality. River, an SF State student from the pre-gentrified Mission, performed several of her works, including “Brownness,” “Home” and a new, untitled piece that she previewed.

Between speakers, students had the opportunity to read an excerpt from a book of their choice. Those brave enough received a goodie bag of prizes.

One of the students was Kermino Gumdan, who read an excerpt from “The Alchemist” by Paulo Coelho.

“There was two thieves plotting that day, who were planning to steal the boy’s sheets and murder him,” Gumdan read. “Since the boy had passed by, they had decided to move on.”

Gumdan chose the book he read from his freshman year, describing how the text weighed heavily on him, and that going up there and finding the courage to read was a personal achievement for him.

“When I was younger, I was jumped,” Gumdan said. “For a while, I was afraid to come to terms with myself until I read this book. Those pages, they gave me hope.”