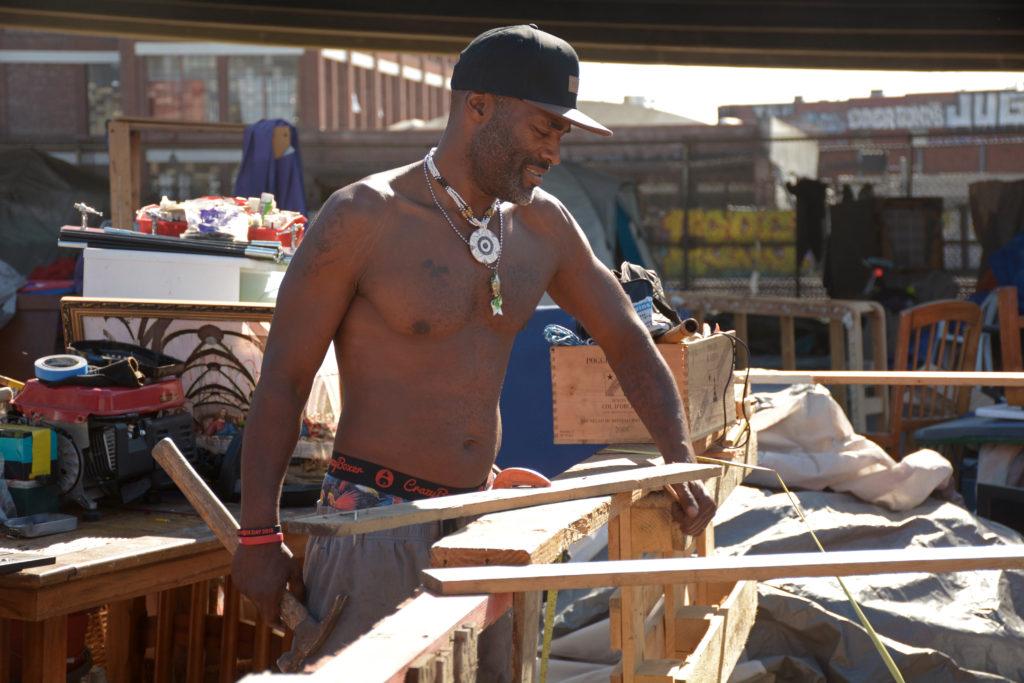 Residents of the E 12th Street homeless encampment have finished rebuilding their shelters following a widespread fire that leveled half of the 450-square-foot area on Sept. 11.

Since then, the City of Oakland passed a controversial measure to displace those living in encampments and place them into Tuff Sheds that the city has erected on parcels of land around the city.

Yet they desperately need better options, as they live in conditions described as filthy and treacherous.
“People are out for themselves here, they steal from each other. I don’t get that, we’re all in the same situation together,” said Erica P., who declined to provide a last name. “It’s filthy. I’m just waiting to be found dead, and my kids won’t even know.”

Resident Fred Smith, 46, described the scene while talking to Xpress a few days after the fire.
“The filth, the rodents, the stench, I don’t use the porta-potties,” he said.

He blamed the unhygienic conditions partly on neglect from the City of Oakland. The parcel of land has three portable toilets and two hand wash stations for roughly 80 people.

“The city has stopped servicing them,” he said. “It’s been about two and a half weeks. Everything is full. People just started using the wall or a bucket in there. We called and tried to get them to pick it up and they would not.”

When Xpress returned a week later, the toilets and handwashing stations had been serviced.

The city is working with non-profit affordable housing agency, the Housing Consortium of the East Bay, to build small communities of Tuff Sheds.

“The lack of immediate available housing requires a short-term and interim healthy and safety intervention, as well as our larger investment in housing development,” said Sarah Bedford, Oakland’s director of human services, during a Sept. 17 City of Oakland council meeting. “To this end, cabin communities were proposed as a strategy that could be implemented and at relatively low costs.”

Two Tuff Shed sites currently exist at Castro and 6th street (slated for closure in March 2019) and Northgate and 27th Street. A third is now slated to open at Lake Merritt this fall. The plan would cost $457,384 and house up to 40 people, according to a Sept. 11 Human Services report to the city’s Life Enrichment Committee.

The report states that unofficial estimates count as many as 50 homeless individuals at Lake Merritt.
Although numerous people spoke out against the plan during a Sept. 17 City of Oakland council meeting, city legislators adopted the resolution to move forward with the plan.

Several members of the community also spoke out against the plan during the Sept. 11 Life Enrichment Committee meeting.

Jesse Smith, who neighbors one of the community cabin sites, said the solution is unacceptable.

“The Tuff Sheds are an internment camp for black people,” Smith said. “They fight for water on the inside. I’ve heard people compare it to prisons, but even prisons provide healthcare and sanitation, and you don’t have to fight over water.”

Oscar Fuentes said the Tuff Shed legislation targets encampments rather than addressing homelessness.
“Saying ‘to resolve encampments’ is wrong,” Fuentes said. “If done right, this should be a solution to homelessness. Not an excuse to kick out people who have already dealt with the fact that there’s no affordable housing in Oakland.”

He added that with five more cabin communities slated for development, according to legislation, that means that $2 million — or a quarter of the state’s Homeless Emergency Aid Program funding — will be going to Tuff Sheds instead of permanent affordable housing.

The two cabin communities have served more than 126 people, helped 23 people gain employment, allowed 23 people to qualify for benefits, and guided 45 people into primary health homes, according to Bedford.

Residents are allowed to come and go as they please and their behavior isn’t regulated “unless it poses a danger to themselves or others,” Bedford said. Pets are also allowed. And while cabins are shared, residents can choose their roommates.

The plan is not a long-term solution, said Darin Lounds, executive director of the housing consortium of the East Bay during the council meeting.

Jerome X., 51, told the Xpress that he disapproves of city efforts that divert much-needed municipal funds away from lifelong Oakland residents like him who need help with affordable housing.

“These people ain’t even from Oakland, they’ve been dumped here by Mendocino County and Humboldt County,” said Jerome, who declined to provide a last name. “There are people from Oakland being run out of here due to gentrification. They’re overlooking the people who really want to have housing, people with families.”

Tristen Schmidt, a volunteer with The Village, an advocacy group for the encampment, said the city isn’t taking residents’ considerations into account.

“They’ve already started construction over there at Henry Kaiser Auditorium even though it hasn’t been approved by city council yet,” Schmidt said.