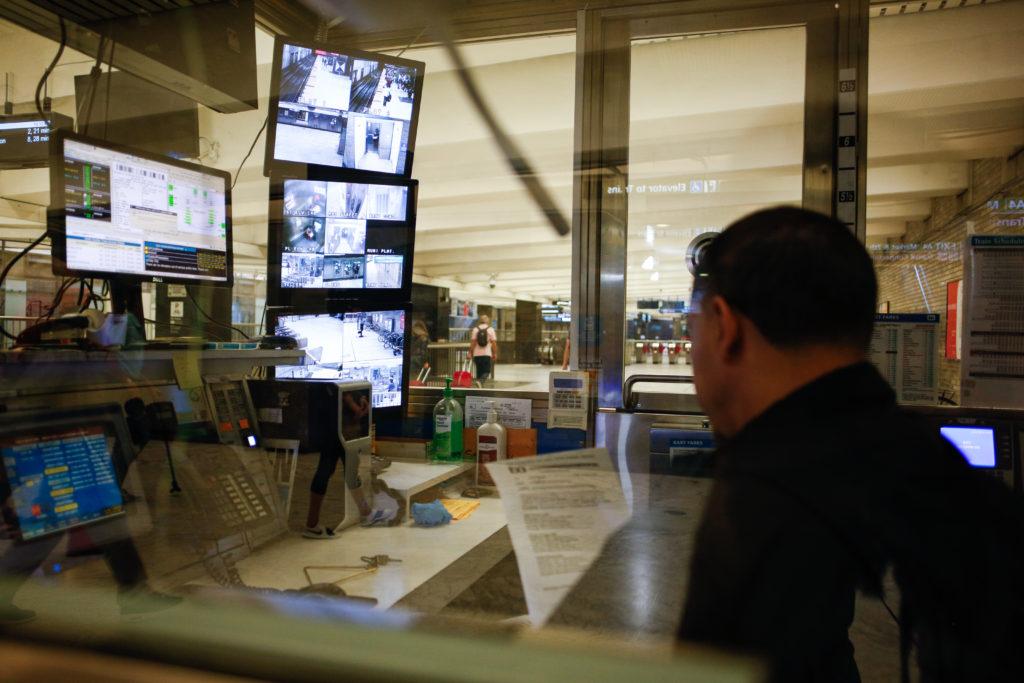 A Bart operator who refused to provide his name reviews a document from one of the multiple control rooms at the Civic Center Bart station while monitors pick up camera activity in the back on Saturday, Oct. 7, 2018. (Niko LaBarbera/Golden Gate Xpress)

BART officials struggled with their plans to prevent crime through mass surveillance and increased policing during a packed safety meeting in Pittsburg on Sept. 27. Critics say BART’s response to the July murder of Nia Wilson is little more than “security theater.”

“Type faster, read quicker, act sooner,” Birsan said. “We cannot afford to have the headlines listing our BART stations in one tragedy after another.”

Many speakers at the meeting said BART is not doing enough to address crime, homelessness and constant reliability problems.

The fatal stabbing of 18-year-old Wilson was not the only homicide on BART since July.

A fight between two men on July 18 at Pleasant Hill Station turned deadly when one of them died from an infected cut from the altercation. A third homicide occurred at Bay Fair Station on July 21 when a suspect sucker-punched a 47-year-old homeless man, causing the victim to hit the cement platform as he fell.

The BART Police Department made arrests in connection with all three homicides in part due to the 4,000 surveillance cameras in operation, said BART spokesperson Christopher Filippi.

“The Nia Wilson case got a lot of attention,” Filippi said. “We caught the suspect within 24 hours. We were able to get images of the suspect and identify him really rapidly.”

BART’s Safety and Security Action Plan calls for an expansion of the system’s surveillance network, including video screens that would let riders know they are being watched. The Civic Center Station installed a live surveillance feed in August as a “friendly reminder” that the area is being monitored.

“We are trying to emphasize that we have working video cameras,” Filippi said. “We don’t want to be a soft target.”

Civil rights groups, such as the American Civil Liberties Union and Oakland Privacy, criticized BART in the past for a lack of transparency over its surveillance program.

BART sent more than 57,000 license plate scans to the Department of Homeland Security in 2017, despite being told not to by the board of directors. A public records request by Oakland Privacy revealed BART was secretly conducting an automated license plate reader program at the MacArthur Station since 2016, according to Media Alliance Executive Director Tracy Rosenberg.

“It leads to people’s rights being violated,” Rosenberg said. “You run into concerns regarding what is happening with all that data, how it is stored and who has access to it.”

In early September, the BART Board of Directors voted in favor of a surveillance transparency policy that would give the public more oversight.

BART started cracking down on fare evasion and issued more than 3,800 citations since March. Fare enforcement teams wear body cameras and must ticket everyone without discretion, but nearly half of the people cited were African-Americans, according to BART Police Chief Carlos Rojas.

“I want people to feel assured that any increased policing will remain under the scrutiny of my office,” Bloom said.

The penalties for BART fare evasion are $75 for adults and $55 for minors. Adults can be charged with a criminal citation if they are caught a third time.

Many critics of BART’s fare enforcement policy say that it punishes the poor and isn’t going to reduce crime.

“I haven’t seen any evidence that fare evasion is leading to crime on BART,” said activist Sasha Perigo. “They are rushing it through when it’s not really relevant.”

The BART Board of Directors voted 7-2 in favor of hiring 10 more fare inspectors to check proof of payment for BART passengers before the meeting ended.

Questions remained as to whether BART’s estimated $25 million safety and security plan would be better spent on improving community relations and services to those in need.

“You are criminalizing poverty.”

For SF State students who commute to class, like creative writing major Rebecca Dominguez, 23, BART is a dangerous way to get around.

“I feel like BART is a lot less safe than being on campus,” Dominguez said. “People try to hit on me. They won’t leave you alone.”

Dominguez said strange men have approached her and have even followed her to campus before.

“I think as a woman, people view BART as an easy way to talk to us since we are trapped there until we stop,” Dominguez said.

Dominguez said that while she appreciated BART’s attempts to clean up the trains, she’d rather see more effort placed on security.

“I’d rather be on a dirty train than worry about being stabbed,” Dominguez said.

SF State student Catherine Stites also relies on BART to get to class and said she experienced similar situations on the train.

“I’ve had some interesting people start screaming at each other on BART. It doesn’t seem very safe at night,” Stites said.

“It really boosted our presence,” Filippi said. “One of the reasons we are trying to provide this visible presence is to be a deterrent.”

Critics of BART’s increased policing say that the poor and people of color are at risk of being victimized by this show of force.

The Democratic Socialists of America San Francisco Justice Committee released a statement on Twitter on Sept. 27: “When we talk about safety we have to remember Oscar Grant and Sahleem Tindle. Would this plan make BART safer for young men like them? Or would it do the opposite?”