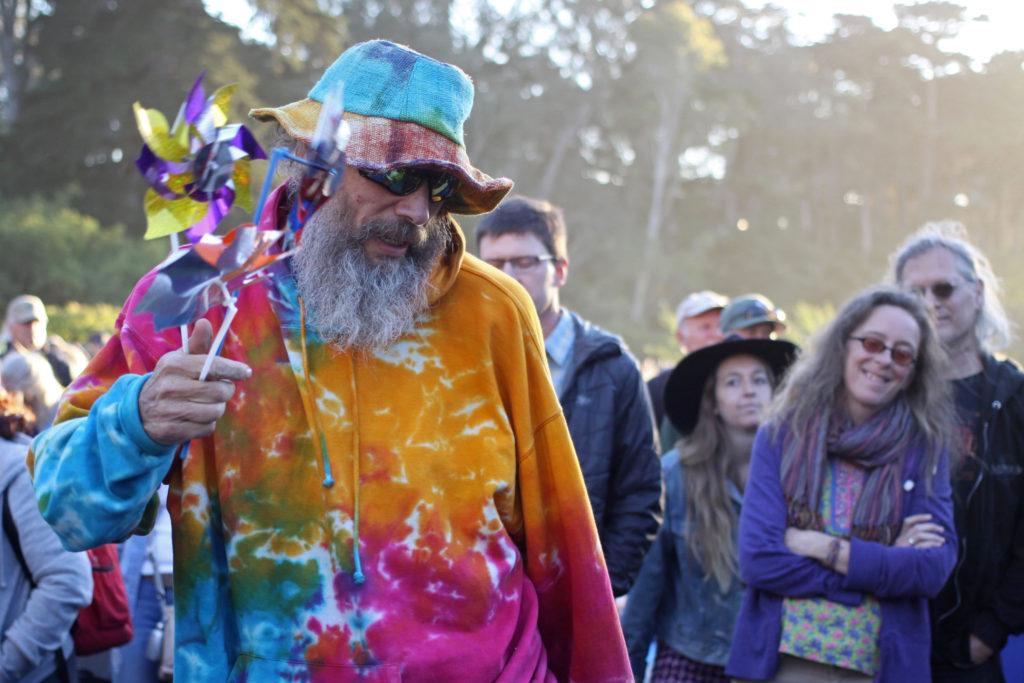 The six stages extending throughout Golden Gate Park held 81 performers during the weekend long festival. Hardly Strictly was accessible to all and attracted out-of-towners and San Franciscans alike to gather the 750,000 attendants. The festival has taken place for 17 years now.

Old-time stars like Emmylou Harris and Graham Nash brought out older crowds, with the highlights of their careers being in the 70s. With sights of men wearing t-shirts labeled “Aging Hippie” in the crowds, the festival was sure to be seen as an older generation’s hippie revival.

The festival, however, did bring crowds of younger audiences and families as well.

SF State senior Isaias Huaracha wants to take advantage of the new artists he can learn of at the festival.

”I come every year and I just like to hear new music that I don’t usually listen to. Usually I never know any of the artists, I just come in and maybe I’ll find something I like and most of the time I do,” Huaracha said.

The highlights of this weekend’s festivities include gospel and R&B singer Mavis Staples announcing she would like to run for president. “I’m going to run for president myself,” said Staples whilst discussing the current presidential administration during her set. Additionally, Lindsey Buckingham made his first solo appearance at the festival, after his split with Fleetwood Mac.

Enrique Gonzalez, drummer for Los Lobos, performed on Saturday at Hardly Strictly Bluegrass. He feels passionate about performing in San Francisco since artists have had immense influence on the city. With the Summer of Love spearheading the hippie movement in the 60s, San Francisco holds deeply rooted musical influence.

“Everytime we come to San Francisco, no other audience fits Los Lobos more perfectly than the mentality of people here. The love and appreciation for music is at such a high level,” Gonzales said.

“I love EDM and the new music that’s coming out today, but there’s nothing like 4 or 5 guys up on stage with no backing tracks that are actually playing their instruments.That’s why I speak so highly of the culture here in San Francisco, people are very conscious of how much it matters, the artistry behind knowing how to play an instrument,” Gonzalez said.

His band, Los Lobos, has been together for 45 years and for that reason reaches a broad audience. He thinks that the music at Hardly Strictly Bluegrass can be equally influential to young people as it is to people of his age.

“I think music speaks to everyone, so in a way it’s a passing of the torch. If you stimulate people with great music like this, somebody could come out of it go back home and say ‘You know what, I was really inspired by what David Hidalgo was playing and I’m going to get into the guitar,’” Gonzalez said. “If just one of the thousands of people there gets inspired by that then I think we’ve already succeeded at presenting ourselves. That’s the importance of young people.”

Other musical performances at Hardly Strictly Bluegrass included Gomez, an indie rock band from England, The War and the Treaty, a husband and wife singing duo, and Dry Branch Fire Squad, a traditional bluegrass band equipped with a banjo and mandolin.

Many young festival goers came for the overall experience. Other than musical performances, the festival features activities as well as different photography and art exhibits lining park.

“I came to see the silent disco. They have a lot of types of food as well,” said Flor Cancino, SF State student.

The festival brought out many students because of it’s free access. The famously unsponsored, free festival has historically been funded by venture capitalist Warren Hellman, who passed in 2011. Since then, the Hellman Foundation has funded the event.

The festival, once dubbed as Strictly Bluegrass Festival, added “Hardly” to its title in order to broaden the scope of musicians it featured, and exhibit styles other than bluegrass.

SF State senior Spenta Mehraban would like to see even more of this variety.

“I would recommend having different artists and more different styles of music,” Mehraban said.

Young and old, Hardly Strictly Bluegrass brought out nearly enough people to match the population of San Francisco to sing along and dance to all types of performers.

As SF State student and audience member Ryan Barber puts it, “Music is really what brings everybody together so it doesn’t matter what your age is.”