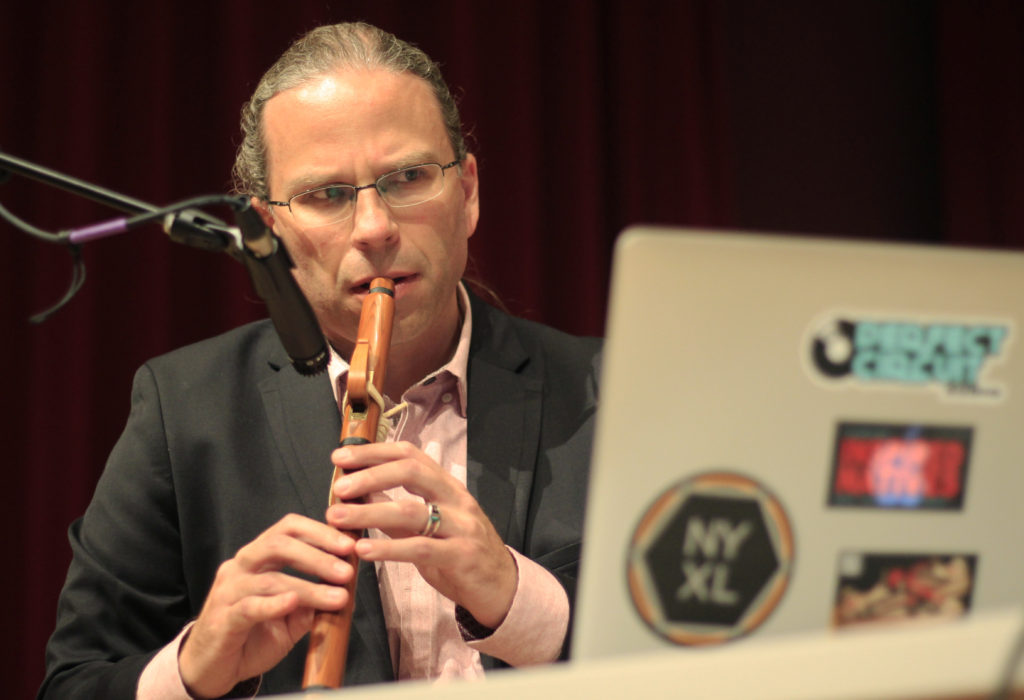 John-Carlos Perea, an associate professor for American Indian Studies, checks the sound while playing his flute for his performance in a recital at Knuth Hall at SF State on Wednesday, Oct. 17, 2018. The recital emphasizes Alcatraz Meditations and Reflections commemorating the Native American Occupation of Alcatraz in 1969 and the 50th anniversary of the Student Strike at SF State hosted by the group ImprovisAsians. (Lindsey Moore/ Golden Gate Xpress)

Gathered on cloth-covered seats, students and visitors clumped together sporadically throughout Knuth Hall at SF State in anticipation of a cultural commemoration. They came to support their friends, search for inspiration, understanding or commemorate their memories.

A series of collaborative performances at SF State between the Asian Improv Arts, the Sound and Social Justice Commons and the School of Music’s Creative Music Studies Program commemorated the 50th anniversary of the Native American occupation of Alcatraz and America’s longest student-organized strike.

The occupation, which lasted lasted 19 months and ended with the forced removal of the occupants, was an attempt to reclaim ownership of Native American land. While they were ultimately forcibly removed and denied their proclamation, the event gained nationwide attention and support.

The strike was led by the Black Student Union (BSU) in coalition with the Third World Liberation Front (TWLF). The strikers, with help from other activists demanded equal access to public higher education. The strike lasted from Nov. 6 1968 to March 20 1969 and led to the development of the College of Ethnic Studies at SF State.

When the vocalists and instrumentalists finished warming up, silence gave way to Jon-Carlos Perea’s opening performance, a musical recital that commemorated the 50th anniversary of the Native American occupation of Alcatraz in 1969.

Breaking his piece into five sections, each section marked by a unique flute, Perea expressed the chronological occurrence of the Indians of all tribes (IAT) occupation of Alcatraz.

As he progressed through his five flutes, the piece became increasingly somber. The inclusion of unrecognizable, sorrowful wailing at its midpoint drove to the heart the plight of Native Americans. That wailing was Northern Plains Powell singing.

“A lot of that singing has that sense of pain; I attribute that to that shared sense of the blues you have between different cultures,” Perea said. “The funny thing is the words that I was singing were, ‘Don’t cry for me because I’m not dead yet,’ so on one hand you have that sense of pain, but on the other hand, you have words that are affirming life …  we’re still here. We have the opportunity to figure it out.”

The entire recital shared the common theme of fluidity. A fluidity that is intended to represent shifting public sentiments and the evolution and progress of social issues.

“The sound represents the feelings, the struggle — I hope they walk away and think, ‘oh, I understand,’” said Jackie Lam, an SF State student who played a 12-string Vietnamese Zither with the Asian Improv Arts group.

“It’s a really big honor, how not just Asian Americans, but as a group and a community, how we’re all united in this way of expressing ourselves,” Lam said. “Music helps us express ourselves.”

Admiration and gratitude were among the emotions that swelled throughout the event.

“If it weren’t for those two events happening, I’m not sure that we would even be here,” said Vince Tinsay, the guitarist on the Asian Improv group. “I want people to take away that if you want things to change or something different to happen, it’s going to require a lot of work and sometimes it’s painful, but that’s what you have to do.”