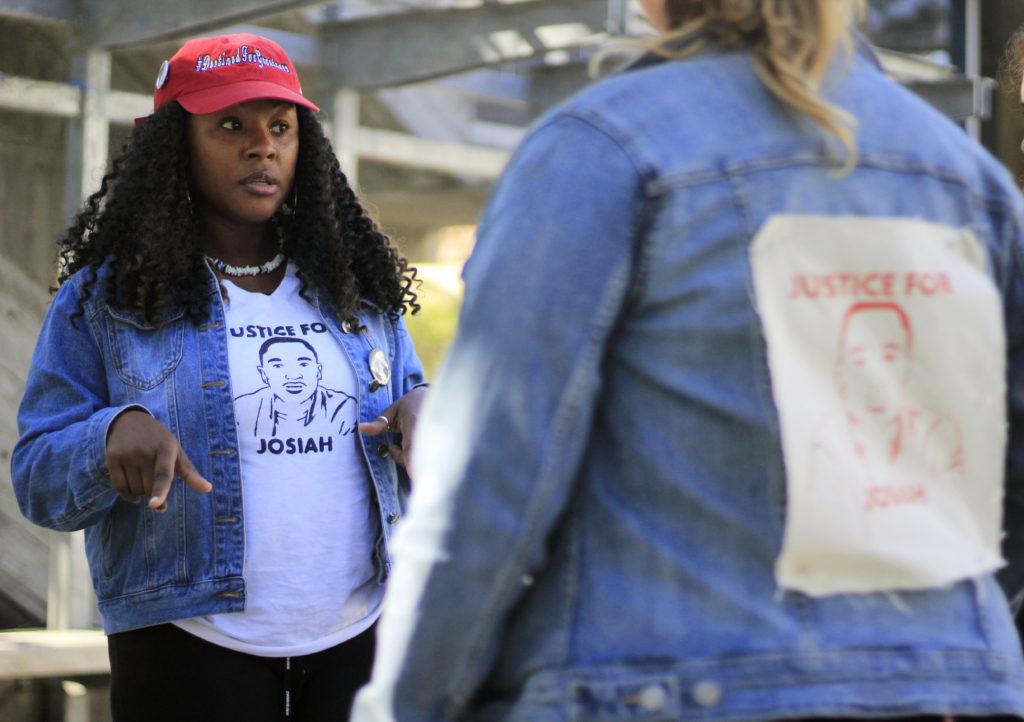 Charmaine-Michelle Lawson, the mother of Davis Josiah Lawson, who's murder case has still not been solved after 18 months, visits SF State to speak with some students on Friday October 19, 2018. She spoke about what can be done by students and what actions need to be taken with the universities in order for them to be held accountable for the safety of their students. (LINDSEY MOORE/ Golden Gate Xpress)

Eighteen months. That’s how long it has been since the murder of David Josiah Lawson, and the case remains unsolved.

Lawson was a 19-year-old sophomore criminal justice student at Humboldt State University with plans to become a lawyer. He was known as DJ to his mother and Josiah to his friends. He relished his role as older brother when with his family in Perris, California.

Upon graduating from high school, Lawson received an academic scholarship. His acceptance speech was a clear indication of what kind of man he was becoming.

“You’re not a man because of how strong you are, you’re not a man because you’re the best athlete in school and have the flashiest clothes,” Lawson said in his speech. “To be a man is to be responsible. It is to feel shame at the sight of what seems to be unmerited misery, it is to take pride in the victories in one’s comrades, it is to feel when setting one’s stone that one is contributing to the building of the world. Being a man of the 21st century isn’t about the quantity of one’s life, but the quality of how you treat others in your life.”

On April 15, 2017, Lawson was stabbed at a party in Arcata, California, a mile and a half from the HSU campus. Twenty-three-year-old Kyle Christopher Zoellner allegedly stabbed Lawson after Zoellner’s girlfriend accused Lawson of taking her phone. Lawson was pronounced dead at the hospital.

SF State student Akaelah Flotho was living across the street at the time.

“When the police arrived, they cowered at the black and brown bodies and circled the block once more, knowing a child was bleeding out,” Flotho said. “As [Lawson] was bleeding, the cops were doing crowd control, his friend’s desperately trying to save his life, the paramedic’s waiting. The woman accusing Josiah Lawson of stealing her phone said, ‘I hope that nigger dies,’ repeatedly, and she turned to his friends and said, ‘I hope your friend dies.’”

After the murder, protestors launched “Justice for Josiah” with vigils, rallies and walkouts to honor Lawson and demand that his murderer face justice.

From Oct. 15 to 19, a Week of Action organized around “Justice for Josiah” was honored across 21 CSUs. On Oct. 15, SF State’s Students for Quality Education along with Justice for Josiah members organized a rally, open mic night and documentary screening.

“We want to send a message to Chancellor [Timothy P.] White that this is unacceptable and we need to protect black students on campus,” said Maria Rivera, Students for Quality Education member. “We need to talk about campus safety […] in a way that doesn’t involve police, that talks about community action and community support so that this never happens again.”

Flotho is concerned that HSU’s incoming students of color are unaware of Arcata’s racist tendencies.

“Students at Humboldt State were reporting racially fueled hate crimes and assault within the community for years. While students of color were being recruited, other students of color were dropping out,” Flotho said. “After a year of living in Humboldt County, I learned pretty quickly that I was not wanted in their community, that I was taking a risk every time I left the house to carry out daily tasks.”

While Lawson’s murder occurred off campus, Flotho said students routinely experience racial aggression and discrimination on campus, a main reason for her transferring out.

“A month before Josiah’s murder I was called a nigger and had a metal object thrown at me while I was napping on the bus on my way home from school,” Flotho said. “Like many students of color, I’m still recovering from my time in Humboldt County, and I’m still aware of all my surroundings at all times because students like Josiah didn’t make it out.”

Lawson might have lived if police and first responders had been more competent. Police delayed paramedic response because the crowd was too hostile, according to a police officer who testified during preliminary trials that the partygoers were yelling, “Fuck the police!” Tom Chapman, former Arcata Police Chief, testified that a  defibrillator used by first responders was low-functioning because of low charge. Meanwhile, Lawson’s friend Elijah Chandler performed CPR for 15 minutes.

Additionally, Zoellner was arrested that night as his girlfriend and 100 possible witnesses dispersed without being questioned. He was released after five days due to “lack of physical evidence,” as ruled by Judge Dale Reinholtsen on May 5, 2017. No one since has been arrested.

Susan Ornelas, Arcata council member, who was the Arcata Mayor during the trial, said several problems led to the ruling.

“In the first trial, there was very little time for investigation, no DNA evidence, no time to test it, and conflicting reports on what happened at the party, from the party goers,” she said.

Arcata city management and council, Arcata Police Department, and HSU all claim to still be investigating. However, 18 months later, Lawson’s mother Charmaine-Michelle Lawson is frustrated that justice has yet to be served.

“This case should have been solved a long time ago,” said Charmaine-Michelle Lawson while wearing a red cap with the words “Destined for Greatness” and “Justice for Josiah” emblazoned on either side.

She is also frustrated that an police reports haven’t been released, despite the demands of her two attorneys.

Former FBI agent Tom Parker helped with the case until last April when he resigned in frustration with the City of Arcata, APD and the district attorneys offices’ lack of cooperation and negligence in following even basic investigative protocol.

Parker told KHSU radio that his team could have solved the case in a matter of weeks or months.

“In my opinion, it was coverup and conspiracy that took place within Tom Chapman, the Chief of Police,” Charmaine-Michelle Lawson said. “[Chapman] wanted the case to stay in Arcata, he wanted no outsiders, because then they would know how bad of an investigation they did, and he wanted to keep it within their circle.”

“This enhanced investigative team is following up and re-investigating every lead previously brought forth in the case, as well as new leads they have developed from their case reviews,” said Karen Diemer, City Manager of Arcata.

Lawson said she hopes students will reach out to the Department of Justice and demand the case be turned over to the DOJ so they may prosecute it.

“Continue to let them know: ‘I am a student at SF State and what happened to Josiah could have happened to me,’” Lawson said.

HSU University Police Chief Donn Peterson told the Xpress that one of multiple ways his department is improving is by collaborating with Equity Arcata, a multi-racial group focused on inclusion and eliminating disparities of people of color in the Arcata community.

“I feel that there is a big sense of purpose that has been coalesced around this issue,” Peterson said.

Peterson acknowledges that much more can be done.

“Charmaine lost her son, and we ought to be listening to her, and if she thinks that we’re not doing enough or that we could be doing more, I think it’s really important that we listen to that,” Peterson said.

Lawson said she’s convinced that the investigation was so poorly done for racially motivated reasons.

“To know that the traditional system is so backwards — to know that someone could commit such a heinous crime and still walk the streets, but I guarantee you that if the shoes were turned, my son would be still sitting in jail. I know that for a fact,” Lawson said.

Lawson’s unsolved murder is not the first. Lawson was the president of a group called Brothers United at HSU, an organization formed after the 2001 murder of black HSU student Corey Clark.

“I wish I could say that this is an isolated incident […] but it’s not,” said James Martel, president of the SF State Branch of the California Faculty Association at the rally on Monday.

At SF State, the murder of Jenny Low Chang occurred in the Paul J. Leonard Library in 1977 and remains unsolved. Chang was an Asian American student who was brutally stabbed 18 times and sexually assaulted. While suspects exist for her case, such as a security guard who was on duty the night of her murder and called in sick the next day, no convictions have ever been made.

Charmaine-Michelle Lawson described the difficulty of being a single mom fighting for the justice of her older son, while his younger siblings Anthony and Chloe are grieving.

“I’m not doing OK, I will say that,” Lawson said. “My son Anthony, he graduated in June of 2017. His brother wasn’t there for his graduation, […] He missed his birthday, my daughter just started high school.

“It’s hard because Anthony said to Chloe, ‘at least you still have a brother.’ Anthony’s like, ‘I don’t have a brother any more,’” Lawson said. “As a mom, it breaks my heart to see that they’re hurting so badly and I still need for them to move on with their lives, I still want them to have memories of their brother, and just keep standing, and let him know that we’re not going to give up.”

Charmaine-Michelle Lawson wants to make sure her son’s name is known, but feels it shouldn’t be her duty as a grieving mother to lead this campaign.

“I’m so busy trying to get justice for him, and making sure my kids are OK, and maintaining the house, and work and traveling back and forth. […] It’s such a simple case, it’s an open and shut case, we know who did it,” she said. “He wanted to make changes. But he’s making changes, even though he’s not here.”