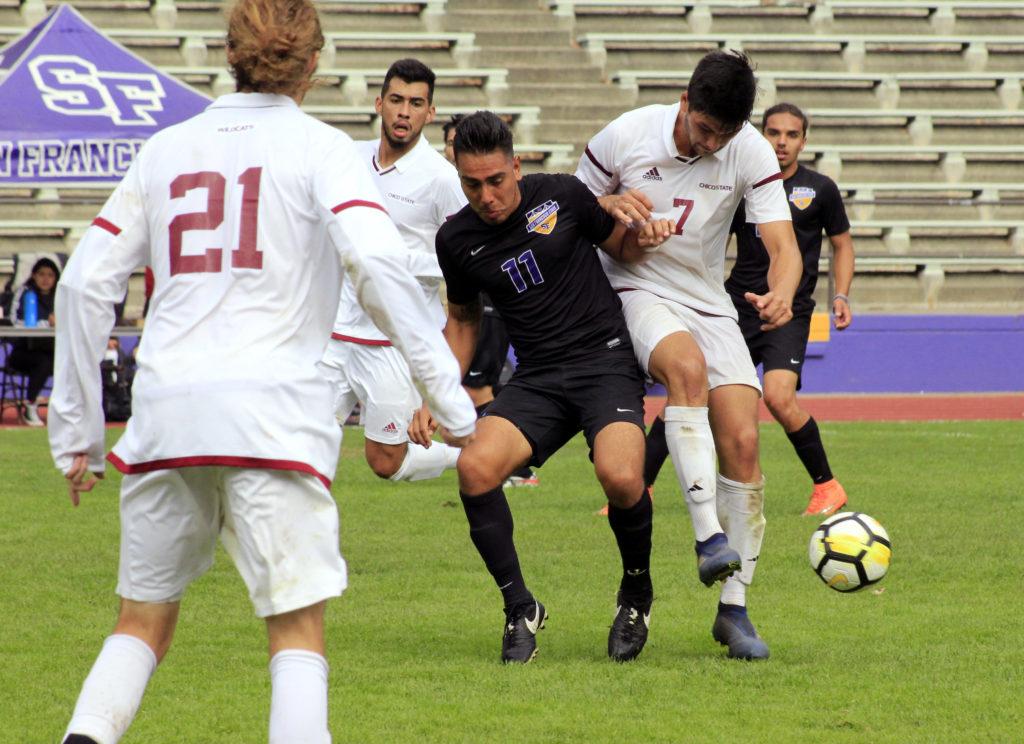 Gators forward Carlos Trujeque-Leal pushes back against a Chico State player during their game against each other on Sunday, Oct. 21, 2018. (Lindsey Moore/Golden Gate Xpress)

An overtime goal clinched the CCAA playoffs for SF State in a grueling 1-0 home victory over the Chico State Wildcats on Sunday, Oct. 21.

The final game of the regular season for SF State was also their senior night, where the program honored their 10 seniors before starting the game.

“It goes by so fast,” said Gators Senior defender Tariq Pulskamp about playing his last regular season game as a Gator. “It’s a surreal moment.”

The Gators changed up their starting lineup for their senior night, starting all but one senior in a win-and-you’re-in scenario for SF State, according to the game box score.

Both teams struggled to set up quality shots early on in the first half. However, both defenses came out to play, blocking shots and denying either offense good scoring opportunities.

“Coming into the game, both teams are aware of how strong their back lines are on both ends,” said SF State head coach Javier Ayala-Hil. “We knew the chances are really going to be limited.”

Late in the half, the Gators were able to get some shots off, but the goal posts eluded both teams’ shots for the entire half.

There were zero shots on goal from a paltry combined four shots between both squads on the half.

While the teams struggled to get shots off, fouls came aplenty for both sides on the half, with six from each team. The foul trouble prevented both teams from mounting any kind of momentum and lingered well into the second half

The Wildcats finally ended the shots-on-goal drought 52 minutes into the game. Gators Sophomore goalie Peter Swinkels made his first save of the game on that shot.

The Gators followed suit, getting their first shot on goal 57 minutes into the game.

A Wildcats scare followed when the ball bounced off of Swinkels’ save, and rolled to another Chico State player. Nothing but the net stood between a Chico State goal, but the kick was whiffed and went wide.

The Gators responded by mounting more offense of their own, but still failed to capitalize on the shots.

The Gators dramatically broke through the Wildcats’ defensive wall three minutes into overtime when Junior midfielder Jonathan Orozco drilled in a goal. The goal clinched the CCAA playoffs for SF State.

“Our teammates, they did a great job defensively clearing that ball when Chico (State) was attacking,” said Orozco about what set up his goal. “The build-up was great, I saw space in front and I just ran, hoping, or knowing my team is going to give me the ball. I scored it, and (there were) just emotions after that.”

The Gators will now look to play the first round of CCAA playoffs on Tuesday, Oct 30. All the other teams in the league have at least two games next week to change up the standings, while the Gators are going into their bye week.