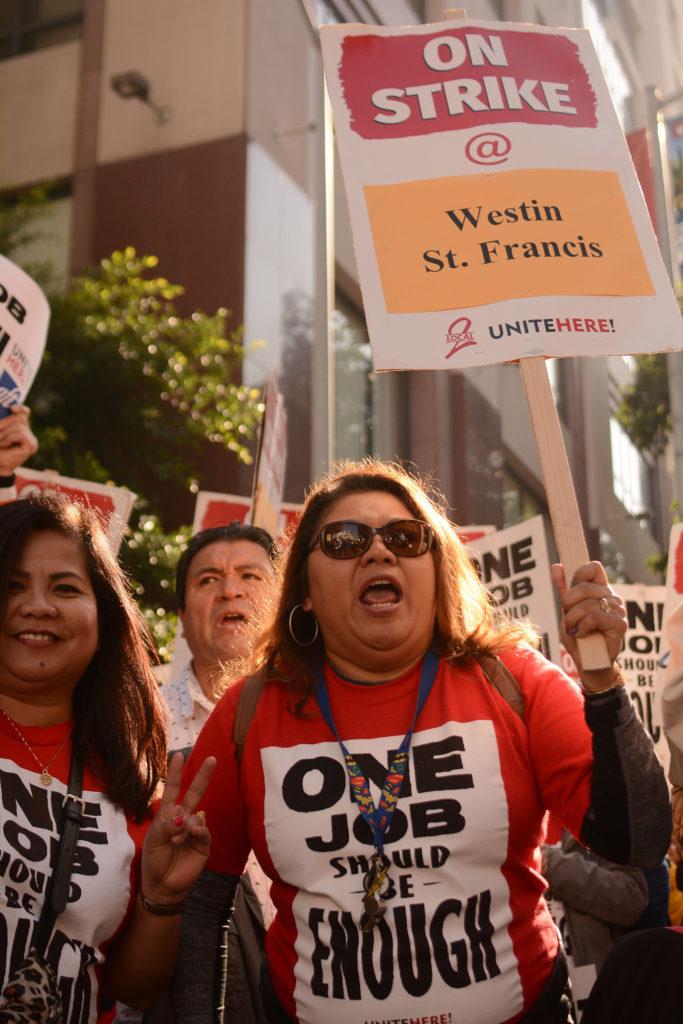 As Marriott workers fight against controversial  labor practices across the country, the seeds of dissent trailed back to the SF State University campus on Tuesday, Oct. 23 where students protested a Marriott recruitment drive inside the College of Business.

“It’s important to me because my mom is a housekeeper, so I know what they go through, like the hardships and what it’s like to have to work more than one job,” said Velazquez, who double majors in Political Science and Spanish.

“I want to give them a voice. I just want people to have the rights they deserve.”

“Once we saw Marriott [was coming to campus], we saw red,” Williams said. “Why is San Francisco State hosting the Marriott when they should be well aware of what is going on outside this campus?”

The Marriott “coffee chat” event was scheduled for 1 p.m. on Oct. 23, but it was cancelled with a College of Business Career Services email sent to all registered guests the previous evening at 7 p.m.

“Unfortunately, Marriott International will be rescheduling their campus visit this week due to a scheduling conflict,” stated the email. “Marriott recruiters will visit campus in Spring of 2019. Please visit MarriottU.com if interested in learning more about their University Programs.”

In a follow-up interview with the Xpress, Susan Roe, chair of the Hospitality and Tourism Management Department, reiterated the information provided in the email, and provided no further explanation.

Jeff Flaherty, Marriott’s senior director of global communications and public affairs, stated he was unable to comment because “we simply don’t have specifics on the event or why it may have been cancelled.”

The students were not disappointed that Marriott cancelled, said Williams.

Velazquez and Williams decided to continue with the protest nonetheless, gathering a dozen students outside of the building then marching into the business building with a banner reading ‘Marriott Does Not Care” towards Javier Garcia’s office, the Commercial Real Estate Program coordinator who organized the event.

“Why are you coming to our school trying to recruit and exploit people when you should be fixing the problems you have?” said Velazquez.

The protest got the results they had hoped for, Williams said.

“We had students stop and talk to us about the issues,” she said.

Williams and Velazquez drafted a pledge, by signing students acknowledge that they are aware of the strike, that they agree Marriott should say ‘yes’ to the contract negotiations brought to the table by the strikers and that one job should be enough to “provide them with livable wages, affordable healthcare, safer job conditions, that includes protection against sexual harassment.”

The pledge also recognizes the status of Marriott as the “largest and richest” hotel company on the planet “earning $22.9 billion in revenue in 2017”

“A lot of them signed the pledge, we got 89 signatures which is really good.” said Velazquez.

Kiley Wyart, 21, is a political science major working with Local 2 , the organizing union behind the San Francisco Marriott protest.

Wyart has participated in picketing and striking, and marched with workers in a rally on Oct. 20.She said the  “mass gathering” reaching up to 1,000 participants from several different unions across the city.

“The march was so awesome we had a band walking through with french horns and trumpets, and then we had random people with instruments just jumping in, and people on balconies and all these trucks driving by and honking it was just a really good energy the whole time,” said Wyart. “I’ve had a lot of success with [Marriott guests] who are saying ‘No I don’t want to cross the picket line, we’ll move our event.’”

Jasmin Vargas, 19, who studies Latino/a Studies and Criminal Justice, also works with Local 2. She’s been campaigning by phone to encourage corporations to cancel or relocate events scheduled at the Marriott.

“I feel like I should recognize my privilege and use it in the best way I can to lend a hand.” said Vargas. “If you’re not speaking up for what’s right then what are you doing?”

Vargas is persisting in her role, despite some pushback from the people she calls.

“It gets tricky because people don’t like having their morals questioned,” Vargas said. “Especially when you tell them ‘If you stay at the Marriott, it’s basically a slap in the face to the workers.’”

While community support stimulates enthusiasm, protesters are also met with opposition from guests.

“[Some guests] are not happy, they come out you get called all sorts of names,” said Wyart. “A lot of the people who are picketing get called racial slurs, especially at the Palace Hotel where it’s $1,000 a night to stay a room. You get those snobby people who are coming out and saying the worst things that they can say just because they’re mad.”

Protesters and organizers are deeply concerned for the most vulnerable workers, especially the women and immigrants, both documented and undocumented.

“Sexual harassment in the hotel industry is rampant,” said Williams. “A lot of these workers are women, people of color or immigrants, so these people are really easy to exploit, and these are also individuals who don’t have a lot of power or feel like they don’t.”

But this vulnerability is exactly what strikers are fighting against.Contract negotiators aim to include language that will protect workers from these conditions.

“I know a lot of the workers are women or women of color or immigrants so that struck me because I come from a minority group,” said Velazquez. “I think they are targeting the lower class population as a whole which is largely made up of immigrants. I just think they’re trying to take advantage of the people they can.”