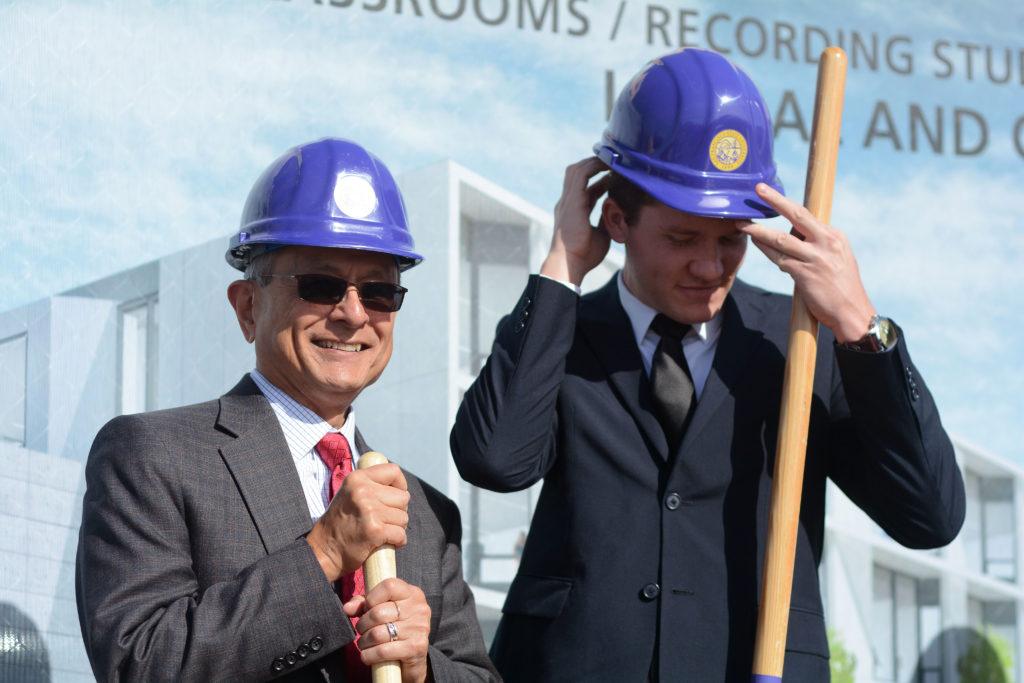 A groundbreaking celebration was held on the Tapia Drive property where construction will occur — and where student housing once stood until its demolition in September.

Among the dignitaries was Bria Howse, a master’s student in the Broadcast and Electronic Communication Arts program, which will move into the new building upon completion in 2020.

“What this building represents is a chance for the new generation of BECA students to launch their careers and leave their mark here at San Francisco State and on the world,” Howse told a gathering of more than 100 invited guests. “And a few more BEA and Emmy awards couldn’t hurt.”

A few of those Emmy-award-winning BECA alumni were in the audience, including rock journalist, author and broadcaster Ben Fong–Torres, who is best known for his association with Rolling Stone magazine, and Peter Casey, who wrote and produced for TV classics like Frasier, Cheers and The Jeffersons.

The new building will offer TV and audio recording studios, a TV newsroom, and a new radio station will host a student-staffed FM broadcast under the call letters KSFS.

“We have potential partners like Sony, KPIX, CBS, that all see this as a significant step in producing the next new talent,” SF State President Leslie Wong told the Xpress.

California State University is putting $58 million into the project while SF State committed $3 million. The remaining $20 million will come from private support, according to fundraising campaign literature.

SF State Associated Students Inc. President Nathan Jones, who wielded one of the golden shovels, told the Xpress that student government had very little to do with project planning. But the building “obviously is a great initiative and it’s going to help with” ASI’s educational and curricular goals for its students.

Horace Montgomery, ASI interim executive director, said the event was the second groundbreaking he’s attended since arriving to SF State in 1997. The last time was in celebration of the Mashouf Wellness Center.

“It’s wonderful,” Montgomery told the Xpress. “Having a new building gives [students] that notion of, ‘Hey, I can get out of here.’ If this is going to help students succeed, we’re 110 percent behind it.”