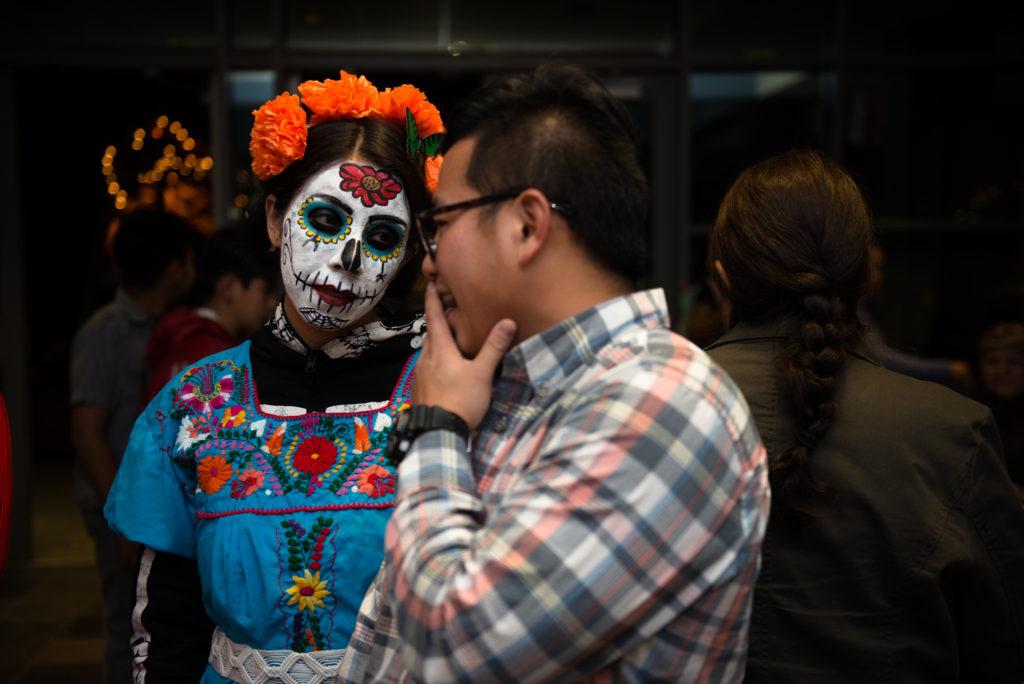 A young couple listens to the music and absorbs everything that is happening around them, and embraces the culture by not only dressing in a traditional way, but also by making herself appear as a skull for the Day of the Dead in Salinas, Calif. Photo taken on Nov. 01, 2017 by David Rodriguez Photojournalism Student at SF State.

As the deceased walk through a path filled with marigold flowers guiding them along the bridge between life and death, people gather the essential elements to celebrate them during the annual Day of the Dead.

The Day of the Dead, or Día de Los Muertos, is a Mexican holiday in which people create an altar with several layers of food, beverages, clothing, flowers, and candles to commemorate the deceased. Each of the elements’ purpose is to guide and purify the person being celebrated. People usually host a feast with particular dishes, objects and smells that their dead loved ones enjoyed while they were alive.

What makes this tradition so special depends on who you ask, given that each culture celebrates it differently, and it also depends on how people perceive the celebration.

In Spain, rather than recreating an altar every year, people light up candles in commemoration of close family members who have died, according to Raquel Moreno Suárez, a study abroad SF State student from Spain.

“People in Spain don’t celebrate the dead in such a way because it is not our tradition. We light a candle and pray for the people who recently passed away,” Moreno Suárez said.

The Day of the Dead is a Mexican tradition that has been around for more than 3,000 years. This tradition was created for people to have a deeper understanding of life and death.

In the Mexican culture, the Day of the Dead is celebrated on Nov. 2. Some people start putting together the altar in the middle of October to have more days to commemorate their loved ones, and others find it more traditional to gather on an actual day and cook the favorite meals of the dead to honor them.

The altar has between two and seven tiers that represent the celestial, the earthly world and the underworld according to Significados a website that is intended to provide reliable and relevant information about meanings, concepts, and definitions.

Although this tradition originated in Mexico, people celebrate it in several countries with large Hispanic populations, such as the United States and Europe. One of the main misconceptions about this holiday is that many in the U.S. think the Day of the Dead is the same as Halloween, given that companies will incorporate the holiday’s themes into the merchandise they sell during the same time of the year.

The more traditional people want to educate and expand the festivity but do not want this sacred celebration to become another, “Cinco de Mayo.” in which people take advantage of this celebration to party with no awareness of what is being celebrated.

Many people are against the U.S. commandeering Mexican traditions because they are profiting off of cultural appropriation.

“Respect not collect,” said Gabriela Segovia-McGahan, an SF State administrative analyst specialist, explaining there is a big difference between wanting people to comprehend the meaning and values of a tradition and wanting to obtain as much money as possible from it. “To expand the culture is not about selling, it’s about welcoming other people to learn the history behind it,” Segovia-McGahan said.

When marketing takes over a holiday, it does not emphasize the meaning behind the ceremonies or recognize the specificity. Instead, it creates confusion regarding the ceremonies and their authenticity. However, it is hard for people to recreate the same traditions because of distance barriers between families from Mexico immigrating to the U.S.

“We grow up knowing we are Mexican and there is a lot of pride in the way they celebrate these traditions, but we don’t experience it first hand,” said Catriona Rueda Esquibel, an associate professor in the College of Ethnic Studies.
There are many ways to honor a celebration, and the best way to commemorate other cultures’ traditions in a respectful and meaningful way is to inform ourselves about the history behind it.
She explained that everyone celebrates these traditions in their own way because it makes it more special to us. Instead of destroying the customs and traditions, “We celebrate it in our best understanding because we want to feel proud of our roots,” Rueda said.