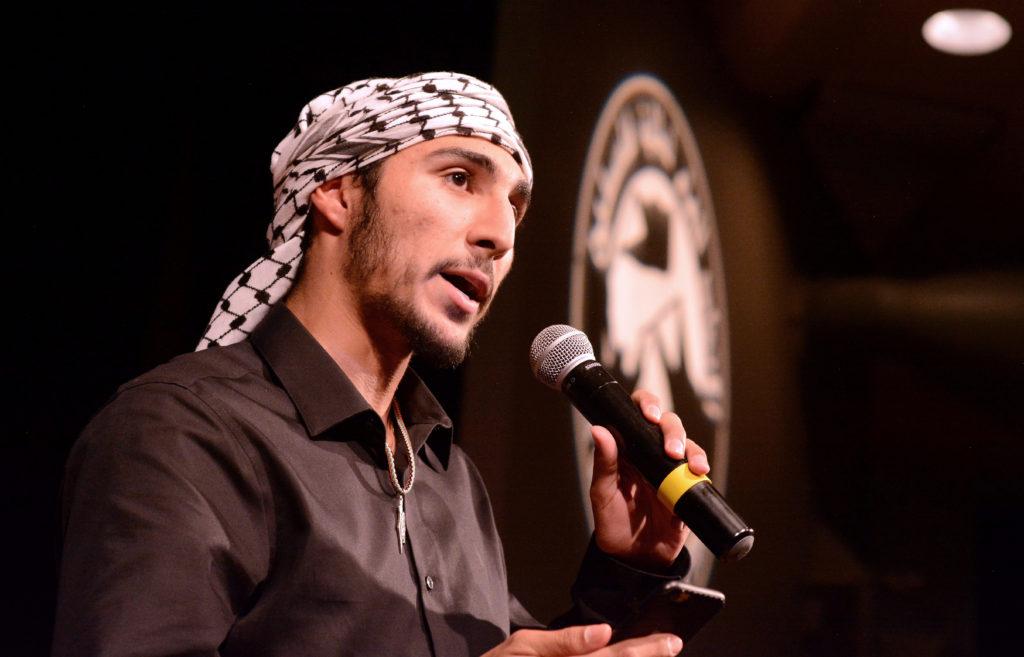 A speaker reads a poem at the 11th commemoration of the Edward Said mural at SF State on Thursday, Nov. 1, 2018. (Aaron Levy-Wolins/Golden Gate Xpress)

General Union of Palestine students reaffirmed their commitment to the Palestinian struggle during an anniversary event at Jack Adams Hall on Thursday, Nov. 1.

The ceremony commemorated the 11th anniversary of the Dr. Edward Said mural, which faced resistance from a number of groups before its completion in 2007.

Professor of Arab and Muslim Ethnicities and Diasporas studies Dr. Rabab Ibrahim Abdulhadi was part of the team that negotiated the terms for the murals creation.

The mural depicts various aspects of the life of Professor Said, including his books, the Jerusalem skyline where he was born and other elements celebrating Palestinian-American culture.

Eleven years later, the mural is no longer just a symbol of the Palestinian struggle, but part of the SF State heritage, according to Abdulhadi.
“It’s part of the turn of the century when muralists Diego Rivera and Frida Kahlo came from Mexico,” Abdulhadi said. “So it’s actually part of the Latin America resistance scene.”

During the commemoration on Nov. 1, speakers used the mural as a symbol of continued determination in seeking an amicable end to the oppression of Palestinians.

“[The oppressors] will not affect how we dream,” said Ossama Kamel, the outreach coordinator for the Council on American Islamic Relations (CAIR). “We will have our dreams, and we will walk like nothing happened, and we will have our dignity and our pride and our joy. We will do all of that. We will express our humanity.”

Speakers at the event drew parallels between the violence and oppression of the Palestinian people and the mistreatment of America’s indigenous population.

“You don’t really have to visit Palestine to know that our struggles are linked,” said Emily Nanea Renteria, a full-time lecturer at the College of Ethnic Studies and member of the board of directors for the American Indian Cultural Center.