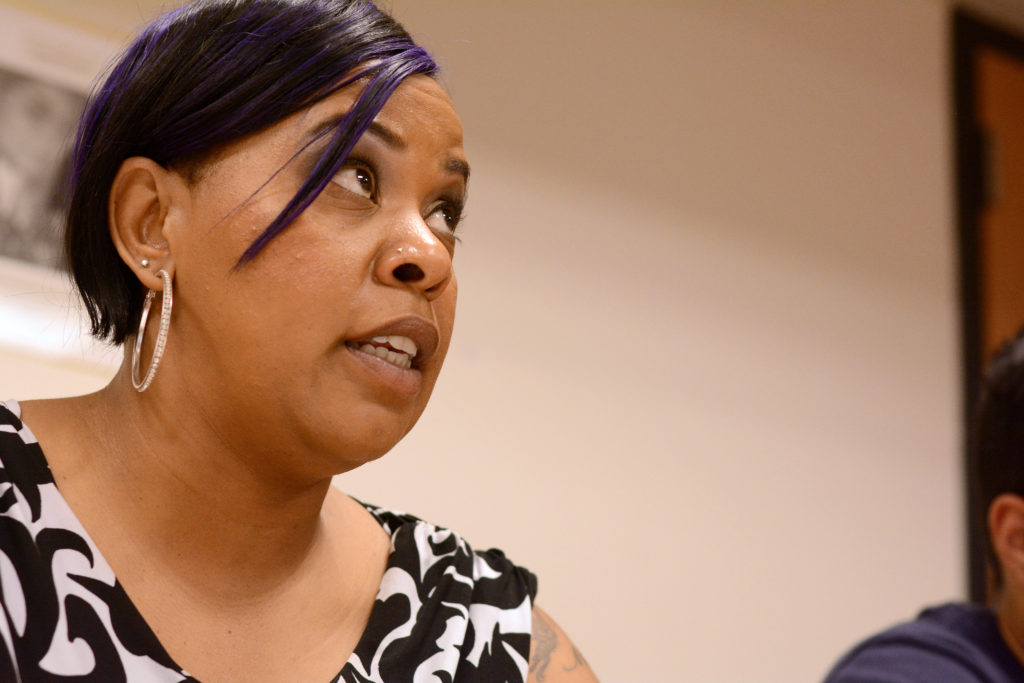 Tachelle Herron Lane, 38, who is earning a teaching credential in social studies, speaks about inviting self-proclaimed white nationalist Brian Cofield to a UA meeting at a University Affairs - a board comprised of elected Associated Students officials - at SF State on Monday, Nov. 5, 2018. The UA passed a motion to invite Cofield to a closed-session University Affairs meeting. (Aaron Levy-Wolins/Golden Gate Xpress)

The Associated Students Inc. University Affairs Council wants a self-proclaimed white nationalist to explain why he is enrolled in race and resistance courses at SF State.

During a meeting on Monday, Nov. 5, Vice President of University Affairs Tachelle Herron-Lane led a discussion on Xpress coverage of self-proclaimed white nationalist Brian Cofield, whose racist views were exposed through anonymous fliers that were briefly posted around campus on Oct. 5.

She said since the coverage, many students have expressed feeling unsafe.

“You were at an event when a person walked in and people were scared that they were gonna shoot up the place,” Herron-Lane said during the meeting. “Right now … a lot people are afraid of people who look like a white supremacist because of the shooting that happened in Pittsburg.”

ASI Ethnic Studies Representative Wesley Cox said, via conference call, that he was uncertain inviting Cofield was good idea. He said giving Cofield a platform to express his views might cause more unrest and safety concerns among students and administration.

“I am trying to figure out the harm or jeopardy of having this conversation with someone, yet we don’t know their intentions,” Cox said. “I’m scared and curious as to what we are doing [as UA Council] by looking into someone else’s beliefs that directly go against our beliefs.”

Herron-Lane said the campus community can’t rely on conjecture alone to feel safe, yet she also does not want to validate his beliefs.

“It’s scary because we don’t know his intentions, and he is enrolled in race and resistance classes,” Herron-Lane said. “We want to know what is his objective.”

She said the only way to quell student’s safety concerns is to speak with Cofield directly.

“I want to extend palm branch like Jesus did to the Pharisees,” she said “Why are you here and what do you want to do with race and resistance class?”

ASI Campus Recreation Representative Francisco Lazo said he noticed various messages directed toward Cofield, like a posting at the 19th Street M-train station that read, “Be afraid nazi Brian” and “Fuck you Brian.”

Lazo said the type of media attention Cofield received might have played a factor in bringing the worst out of people.

“I don’t think this the best way to respond,” he said. “I don’t know if it’s the press’ fault, I get it. They had to report the story. But some of the language used in this article sets him up for failure at SF State.”

ASI Business Representative Zena Khesbak objected to suggestions that Cofield might be a victim.

“Everyone is allowed to have whatever opinion they want,” Khesbak said. “He is known to be affiliated with hate groups. He enrolled in a race and resistance class knowing the possible effect it would have on students. He knew, going in, about the repercussions.”

The UA passed Herron-Lane’s motion to invite Cofield and SF State’s Dean of Students Shimina Harris to a closed door meeting within the next two weeks to discuss his intentions and the safety concerns that have gripped some students since the fliers went up.