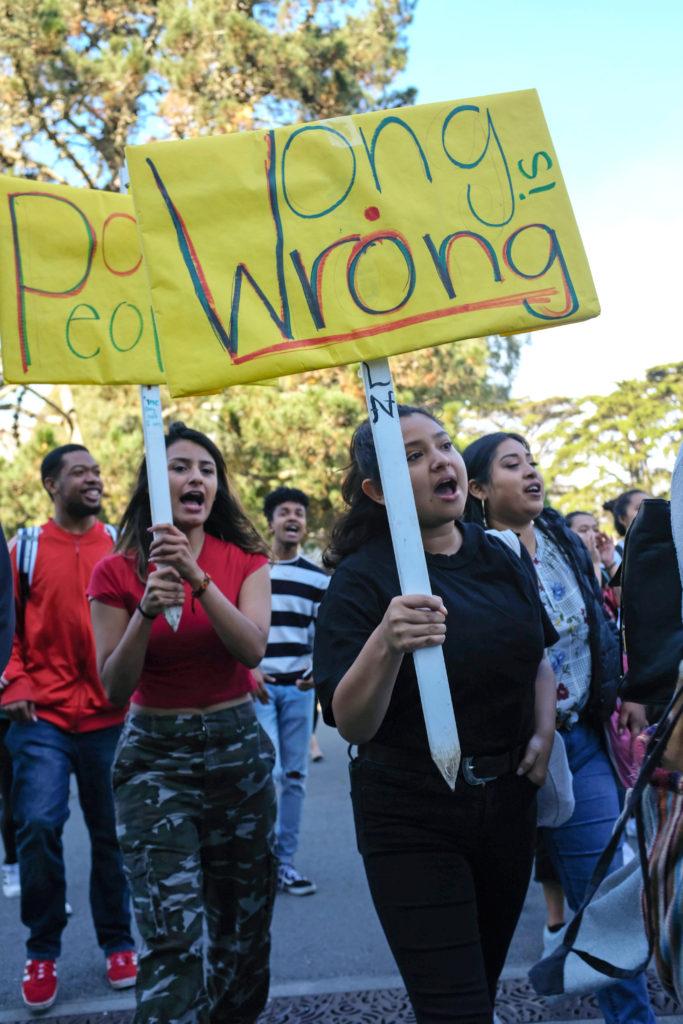 SF State students participate in a walk out in honor of the 50th anniversary of the of 1968 student strike on Nov. 8, 2018 (Camille Cohen/Special to Golden Gate Xpress).

A crowd of about 50 protesting students crammed into a narrow hall of the fifth floor of the administration building while stomping, singing, chanting, banging on walls and plastering a list of 16 demands on President Leslie Wong’s door on Thursday, Nov. 8.

The action was intended to commemorate the largest student strike in U.S. history, which began on SF State’s campus 50 years ago this month.

Black Student Union coordinator Damion Square led the students from Malcolm X Plaza. They led various chants such as “On strike, shut it down!” and “The people, united, will never be divided!” while marching up the administration building stairs.

“I left home because I wasn’t accepted for who I am,” said Ayla Karaca, an SF State student who is housing insecure. “To be a student at SF State, to fight to stay here, it’s literally impossible with no housing. I am couchsurfing just to get my education.”

According to LeAna Hudson, BSU public affairs coordinator, the demands were agreed upon by various student organizations during a meeting on the previous day.

“It was a collective list that was created by all of us so we could all be represented correctly and accordingly,” Hudson said.

Students responded by chanting “We want Wong!” displeased that he was not present to hear their demands.

From Nov. 6, 1968, to March 21, 1969, students from the Black Student Union and the Third World Liberation Front led the longest student strike in America against a Eurocentric education that they believed didn’t represent them.

The end of that strike led to the establishment of the College of Ethnic Studies.

Some came to the demonstrations to show their support for and awareness of the significance of ethnic studies.

“It [Asian American Studies] is a program I deeply cherish because it’s something that’s unique to our school,” said Dylan Nishi, a pre-nursing major. “I’m participating because it shows that I have a strong root in this school, such as social activism and progressive change for my fellow students.”

He said he hopes that whoever replaces Wong will be transparent and responsive to the concerns of students.

Others represented themselves as students who were dissatisfied with what they perceive as class shortages and a lack of diversity among faculty.

The standoff ended when Luoluo Hong, vice president of Student Affairs and Student Management, used a bullhorn to negotiate a temporary resolution to hear out the students in the future.

Hong responded to the action at 2:30 p.m. alongside Jason Porth, the vice president of University Enterprises. Hudson fielded questions from the crowd in an impromptu open forum with Hong.

Some of the most prominent issues were cost-related, with Square asking Hong what she’s doing to protect marginalized students from gentrification.

Hong mentioned the campus survey, which the students didn’t appreciate.

“I think the students made a collective sigh because we’re aware that these campus surveys happen on a pretty regular basis,” Square told Hong. “In the past, the surveys you guys have done have given the same results in terms of the situation that marginalized students are on campus consistently.”

Yuriko Castillian, a criminal justice major, told Hong that she was separated from her mother due to gentrification.

“I wanted to bring it up to the president [Leslie Wong], and his lack of interest in student interests is messed up,” Castillian said. ”I just wanted to express my pain and convey enough emotion to show how affected I am as a San Francisco native. I don’t even have it the worst.”

The demonstrators ended the strike at 4:05 p.m. when Hong signed a resolution to address the protesters’ claims.

“Right now, it’s more important than ever that we don’t let up off their helmet. As you see, they don’t take us seriously,” Square said. “They’ll only take us seriously when they see that we’re serious. The only way we’re going to be serious is if we don’t stay off their heads about our demands.”