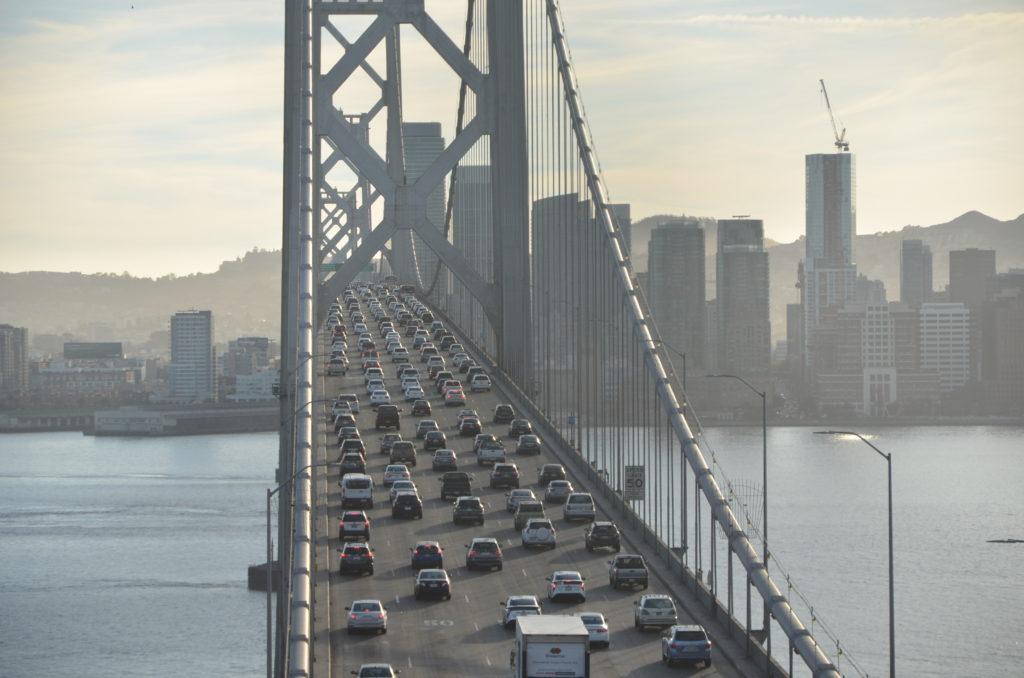 The traffic caused by commuters starts around 4 p.m. and lasts until around 6 p.m. A large contribution is due to the influx of commuters living in the city. (Nicole Newman/Golden Gate Xpress)

On an average school day, SF State student Lianna Reich, 25, will leave her home in Healdsburg, California around 7:15 a.m. to embark on her commute. She will take a car, a train and two buses to get to campus, getting there by around 11 a.m.

Reich is a junior majoring in English education. She’s also what’s now commonly referred to as a “super commuter” — one who travels 90 minutes or more to work or school.

Reich is just one of nearly 4 million Americans who have taxing “super commutes” to work or school each day. According to a study released in April by Apartment List, one in 36 commuters in the U.S. are super commuters.

Reich drives to the SMART train station between Windsor and Santa Rosa, rides to the San Rafael Transit Center, runs to catch a Golden Gate Transit bus going towards the Golden Gate Bridge Toll Plaza, then waits for a Muni to take her the rest of the way to campus.

The trip is long, cumbersome, and at times, the transportation is unreliable, Reich expressed.

“The commute is the most stressful part of school,” she said.

On her way home, Reich tries to catch the Muni by 8 p.m. so she can board an 8:50 p.m. transit bus at the bridge. If the Muni is delayed and arrives at her stop too late, she’ll have to wait an hour in the cold for the next bus.

Reich gets to Santa Rosa by as late as 10:30 p.m. The SMART train could shorten her trip, but it stops running too early, she said.

From Santa Rosa, she’ll either get a ride from a friend or, as a last resort, order a Lyft to Healdsburg, which would cost around $25.

Her daily commute costs her $26 on a good day, $50 on a bad day, she said, adding that she’s only had one bad day this semester so far, but she expects to have more.

“Luckily I have supportive friends who will take me to my house in Healdsburg, but yeah, it sucks,” she said.

Reich said her parents, who live in Staten Island, New York, have free, reliable, all-day public transportation, and she wonders why it’s not the same here.

“It kind of throws me off that California is supposed to be a green state, but I feel like public transportation isn’t incredibly accessible,” Reich said. “Or that the only student discount I get is once I get to Muni, but otherwise I’m a student paying full fare for the SMART train and Golden Gate Transit.”

As Bay Area rents soar and the unemployment rate hits a record low, people are traveling greater distances to work in the city. According to SF State’s 2018 Transportation Survey, nearly 60 percent of students, staff and faculty reside outside of San Francisco County.

Miguel Gutierrez, 23, typically drives an hour and a half between Gilroy and SF State, where he studies kinesiology. He said he spends between $300 to $400 a month on gas and public transportation, but it’s still “definitely cheaper” than living in the city.

“That’s one of the reasons why I decided to move back home, because I was living in Parkmerced and I was almost paying $1,000 [a month] for my own room,” Gutierrez said.

Gutierrez is meticulously organized about his time and transit schedules, as most super commuters have to be. He leaves home at 5 a.m. so he won’t hit too much traffic, yet still runs into morning congestion along highways 101, 85, then 280, and he witnesses accidents nearly every day.

Gutierrez sometimes carpools with friends from San Jose to ease their carbon footprint. Other times, he’ll use public transportation to save on gas money and to avoid putting more mileage on his car.

When using public transit, he boards Caltrain in Gilroy at 6 a.m., rides to San Jose, takes Caltrain’s Baby Bullet Express to Millbrae, takes BART to Daly City, then takes the SF State shuttle or the 28 Muni to school.

This trip costs $30 round trip and takes two to three hours. Gutierrez said he typically drives to save on time, but no form of long-distance commuting in the Bay Area seems ideal.

“Commuting could be crazy at times, but, I mean, sometimes you gotta sacrifice,” he said.

In 2015, SF State’s Associated Students Inc. issued a student transit pass resolution that took effect in Fall 2017. The referendum implemented a mandatory student fee of $180 per semester to allocate funds to the Gator Pass, which acts as a Clipper Card and provides free Muni rides and a 25 percent discount on BART.

Gutierrez said he appreciates that the Gator Pass gives him a free Muni ride, but it doesn’t provide discounts for CalTrain.

“I wish it could. If it did I would definitely use more public transportation,” he said. “I think any type of transportation possible the school can provide to the students would be awesome.”

Joy A. Manaois, director of operations and finance for the Division of Campus Safety, said in an email that the Parking and Transportation Department works with 511.org to provide a ride match service for students to carpool to campus.

“We are in the process of researching other carpool programs (e.g. Waze carpool) and we have Zipcars available for those who do not drive their vehicles to campus and might need a short term vehicle rental to run errands or get to appointments,” Manaois said.

The Zipcars are located in the Lot 20 parking garage on the street level, according to the Parking and Transportation Department website. Students can join the Zipcar program by applying for a one-year membership through a $25, one-time application fee. The membership includes insurance, a complimentary gas card and 180 miles per day included (45 cents per mile after that). Further information on rates and discounts for students can be found at Zipcar’s SF State affiliated website.