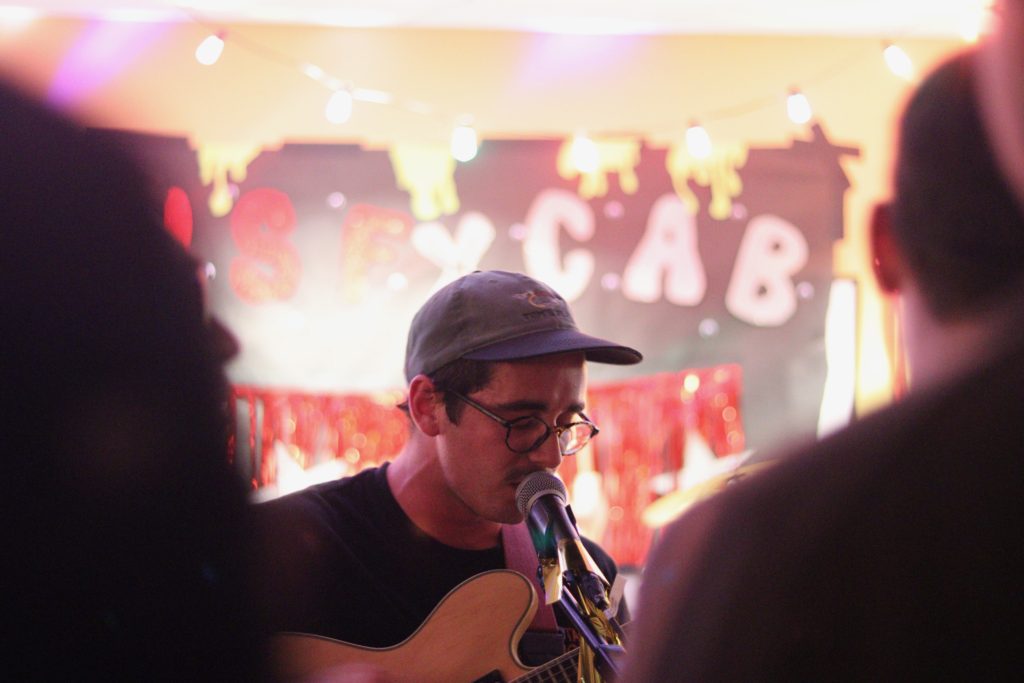 Mint band member, Hayden Kellam, sings during a show at The Undercaf at the University of San Francisco on Thursday November 8, 2018. © (Oscar Rendon/GoldenGateXpress)

Not to be mistaken with the Belgian pop-rock band of the same name, this surf-rock band hailing from Orange County is Mint. A group of three SF State students and one alumnus bring a dream-pop combined with surf-punk sound to the San Francisco music scene.

When Kellman moved to San Francisco in 2015 to study linguistics at SF State, the band had some long-distance difficulty with the songwriter nearly 400 miles away. Tavakoulnia and Bolton followed Kellam to San Francisco two years after. The original bass player, Chris Uhrich, left the band three months ago when he moved back to Orange County. The band found their current bassist, Danny Drysdale, through Bolton and Tavakoulnia’s roommate.

According to Tavakoulnia, the band’s main focus is getting a new album out before they start planning a live-in van tour of the West Coast.

“We were close to actually go on tour, but in reality, we thought the priority was making an album because we haven’t released an actual album,” Tavakoulina said. “We were supposed to go on tour down south and back up but we decided to use that time to record an album and then we can do a tour.”

When daydreaming of touring, Drysdale joked, “I might kill you,” to Bolton. But coming back to reality, school is the main roadblock for the band’s hope of a tour. Money, a van, publicity and a booking manager are also things stopping them from going on tour, according to the band.

Besides playing at Noise Pop, American Television Access or the UnderCaf at the University of San Francisco each member has a side project, work, school or all of the above. Bolton studies theater arts and used to work two jobs but just recently quit one of them. Aside from Mint, Drysdale is also a member of the psychedelic band, Mantra. He also works at Simple Folk –– a collective that hosts monthly shows at Music City SF. Tavakoulnia is making solo tracks under Kidrenegade on SoundCloud along with another side project with Bolton called Dreamboat.

The band has one eight-track album, “Vintage Bad Stuff,” that was released on the band’s Bandcamp in 2015, and one two-track EP, “Haunt Your Days,” that is available on Bandcamp and Spotify.

According to Kellman, “Haunt Your Days” was recorded in one day at Jazzcat Studio back in their hometown. Stuck in 100-degree heat inside an even more hot 12-by-5 studio, the band recorded the two songs while Tavakoulina fought for a hot-and-ready pizza break at the Little Caesars next to the studio.

The band plans to record their new album at the same studio in January. According to Bolton, they only have a few songs for the new album and are taking suggestions to name it. Mint also plans to organize a few shows in Southern California while they are down south to record the album.

According to Kellman, the only sort of ritual they do before a show is standing outside the van nervously smoking cigarettes. When discussing what makes their best show, the order in which the band plays can set the tone. “It’s tough being the first band that plays, because you are the one setting the mood for the night,” Bolton said.

“Second is the best position to play, and last is the most coveted one because you are a closer and that is supposed to have more importance,” Drysdale said. “But for the second band, the audience is warmed up and ready to go and not tired from the first band.”

For Tavakoulina, his most memorable show was when they played the Noise Pop festival in 2018 because of the free beer and VIP experience. The band bases their favorite and worst shows mostly off the audience’s energy, which is why Drysdale invites people to the front and on stage for performances.

“The best shows are when the audience is just super hyped because there are some when there are a shit ton of people there but they are just barely dancing or moving at all,” Drysdale said.

Drysdale said he often tries to bump into the crowd and gets rowdy with the audience. “Danny is definitely the most physical person in the band,” Bolton said.

The band mostly plays small DIY venues, but Bolton said he would gladly be the openers at venues such as Brick & Mortar or the Great American Music Hall. Mint has two upcoming shows this month at the Milk Bar on the Nov. 28 and the Honey Hive on Nov. 30.