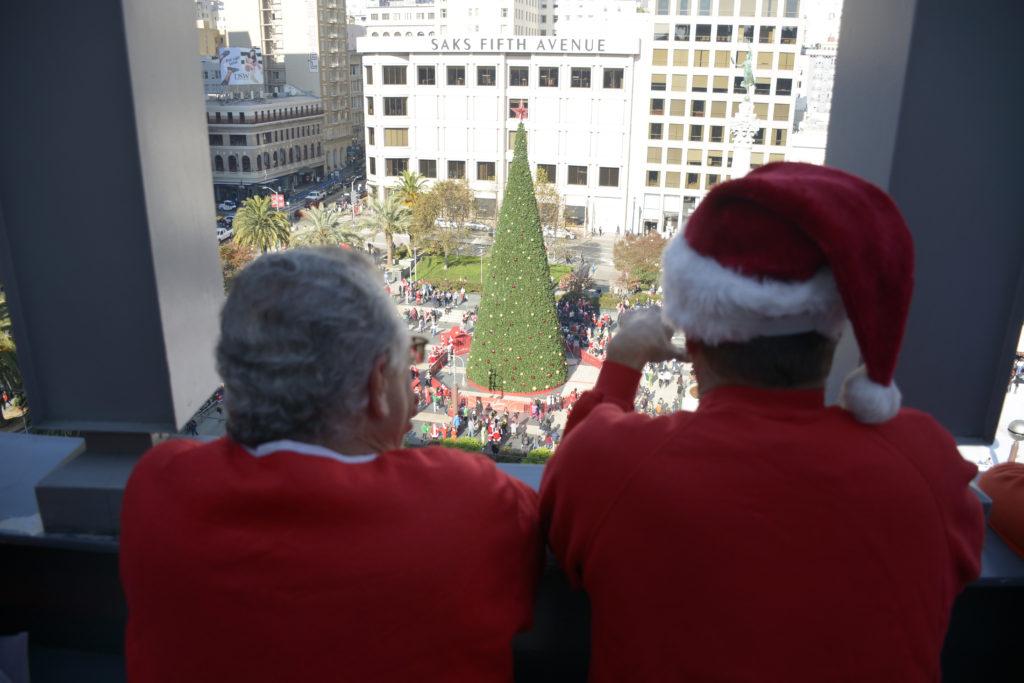 Hundreds of people dressed up as Santa Claus and gathered at Union Square for SantaCon on Saturday, December 8th, 2018. (Tristen Rowean/Golden Gate Xpress)

On Saturday afternoon, Union Square in Downtown San Francisco transformed from a popular tourist photo-op to a sea of people donning their best red and white Santa Claus suits and matching hats, ready to drink their way through this year’s SantaCon. Even after not being granted a permit by the city, the Santas persisted with their holly jolly joy.

The annual pub crawl officially kicked off the holiday season in San Francisco with thousands of Santas drunkenly taking over the streets surrounding Union Square, where the festivities officially started at noon.

For college students, the second weekend in December is the height of finals season. With only mere weeks left in the semester and a last-minute scramble to save their grades, the pressure is on for SF State students. But the stress of finals doesn’t discourage everyone from going out on Saturday and participating in the holiday fun while balancing their school responsibilities and social life.

“Balancing finals with work and fun time is pretty insane; I have basically every hour planned in my calendar on my phone in order to keep myself on track and productive but it still doesn’t feel like enough sometimes,” said Nolan Moore, a senior creative writing major at SF State.

“I personally find it difficult because not only do I have a lot of finals but my schedule only allows for me to spend ‘X’ amount of time on each final.”

This year was Moore’s second SantaCon. On top of school, Moore also works part-time at a Starbucks just a few blocks from Union Square. Between school, work and a social life in one of the most expensive cities in the country, finding a way to stay on top of everything can be a daunting task.

“When I do go out to have fun, be a person, socialize outside of school and work, I try to really make it count,” Moore said. “Usually, Saturdays are the only day I go out during school, SantaCon conveniently worked out, which is good because it’s an excuse to get out for holiday fun and to day drink with your friends.”

Nicole Lee, a hospitality major at SF State who works three part-time jobs, had a shift to work after SantaCon, but she still tries to make time for social activities. “I have an agenda, and I write down all the homework and assignments I need to do for the week, and then I always try to figure out when I can do my homework, because I also work and I go out,” she said. “I just try to get all the important stuff done first before I go out and drink and have a good time.”

For Lee and Vanessa Keopaseuth, a former Academy of Art student, it was their first time going to SantaCon. Keopaseuth, who has lived in San Francisco for five years, didn’t know about the annual event until her friends invited her out. They were both underwhelmed by the experience and the older, techie-oriented crowd the event attracts.

“It’s literally a day purely to get hammered,” Keopaseuth said. “Not opposed to the idea of it, but I’m sure it would be more fun or equal to if we did exactly that on a regular day with friends and without the crowds.”

Lee also thought the event was too built up. “It’s a little bit overhyped, but I think maybe it’s just not my thing,” she said. “But I had fun just hanging out with my friends.”