“Mojada: A Medea in Los Angeles,” a story of the common immigration experience 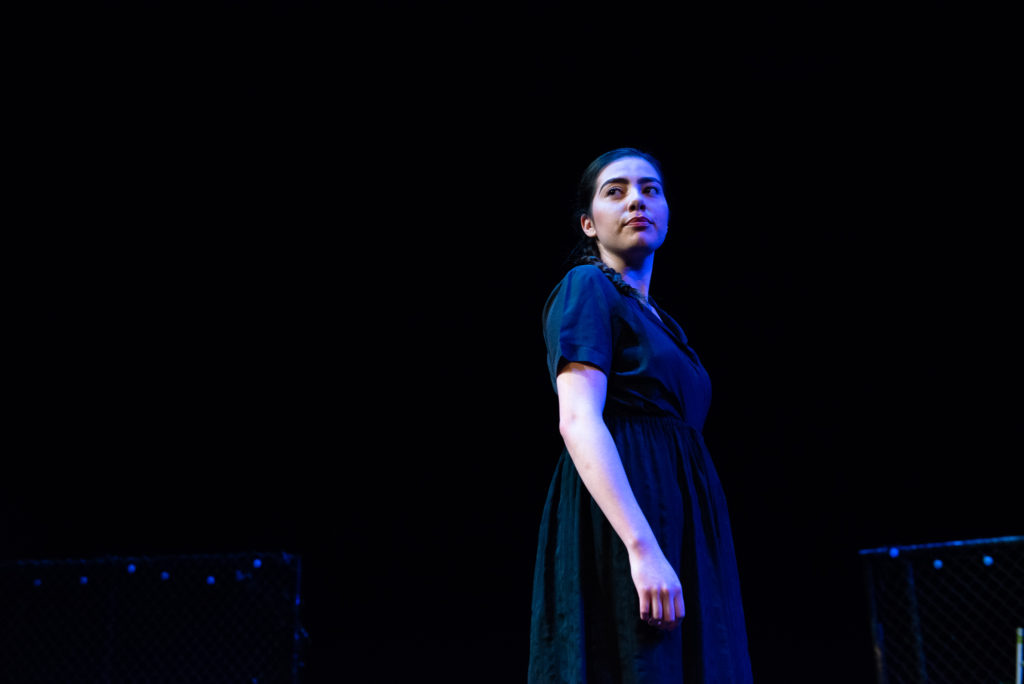 Gabrielle Trejo, 21, is a communication major stands on stage inside the Little Theater for the final dress rehearsal of "Mojada: A Medea in Los Angeles." This play was put together by the School of Dance & Theater at SF State on Wednesday, Dec. 06, 2018. (David Rodriguez/Golden Gate Xpress)

Sexual assault, family separation and sometimes death are some of the outcomes of immigration for many families. “Mojada: A Medea in Los Angeles” chronicles the journey of a family of three as they face these tragedies.

“Mojada: A Medea in Los Angeles” premiered at SF State on Dec. 8 at 2 p.m. in the Little Theatre. The play, written by Luis Alfaro,  is an adaptation of the Greek myth “Medea.” The play modernizes the Greek tragedy with scenes that mirror today’s society. It tells the tale of Mexican immigrants coming from Michoacan to Southern California in search of a more sustainable life, but at a cost.

Instances of affairs, deportation scares and assimilation in the play allude to the difficulty involved in immigration, gentrification and the #MeToo movement.

Director Terry Boero hoped to highlight these themes because they are relevant to our current political climate.

Boero wanted to give a sense of recognition for the characters’ homeland in Mexico by incorporating its culture and language.

“There’s a lot of Aztec references and language in it, so it’s totally an embrace of the culture,” Boero said

SF State student Alexander Gonzales appreciated the recognition of Mexican culture, which he has not seen much being a part of the theater industry.

“I’ve been in theater since I was 13, and growing up in that and looking up to theater shows and different actors and lead roles, I always had to stretch myself to be those characters or relate to those characters,” Gonzales said. “I defy you to name off the top of your head a strictly Mexican lead role besides anybody in this show on Broadway. You can’t.”

Although there is an appreciation for Mexico and a feeling of loss when leaving it, characters are also faced with assimilation. Some of this loss comes in assimilating to the English language, food and style of dress, a large part of the immigrant experience.

Gonzales plays the part of Jason, who embodies the enforcement of this ‘Americanization.’He described his character as losing touch with his family and homeland.

“You should never lose sight of where you come from, and he does,” Gonzales said.

Although Gonzales doesn’t agree with some of Jason’s assimilation, he relates to his character with his own family history in how “their original heritage was put by the wayside.” He is a third generation Mexican-American with a family that lost parts of its original culture in every marriage.

“It’s really interesting because it makes me wonder if there was a ‘Jason’ in my family who was always telling his family to speak more English and try to be more American,” Gonzales said.

SF State student Tyler Lauren Brown said her character, Armida, is a mouthpiece for xenophobia and pressing gentrification on immigrants, another theme of the play.

“Even though she’s not my favorite character, she’s still important,” Brown said. “She represents a lot of things that we’re trying to address right now, especially in this political climate.”

The #MeToo movement is also a relevant, modern theme of the play, according to Boero.

Boero described the play’s protagonist Medea as “a woman of power and a woman of passion, and she’s forced into roles that don’t acknowledge her own passion.”

Gonzales said this oppression of women is prevalent in today’s society and Medea’s reaction will resonate with many women in the movement.

“She’s takes control of her own destiny instead of letting everybody tell her what she did wrong and what she needs to do, which I think is relatable to the people that are part of the #MeToo movement,” Gonzales said.

Brown agreed, adding that there needs to be more representation of women of color and immigrants in the #MeToo movement, and this play aids to this representation.

Many actors and actresses who are a part of “Mojada: A Medea in Los Angeles” are familiar with the difficulties of immigrating to this country.

“For me, coming from this background of my family being Mexican, first generation born here, this is all very familiar in a sense,” said Abigail Elizabeth Tirado, SF State student playing Tita in the play. “This is all normal for me in a way.”

Tirado hopes the audience will get a sense of the atrocities immigrants go through from an inside perspective, something that has always been a recurring discussion in her family.

Gabrielle Trejo, an SF State student playing the main role of Medea, is also a first generation immigrant and resonates with immigrant struggles. She related the scenes of a hardworking mother with her own mothers’ sacrifices.

“What I resonate with is how hard-working mothers can be and what a mother does for their child,” Trejo said. Her character reminded her of sacrifices her single mother made to raise her among many other siblings after immigrating to the U.S.

Gonzales knows that aspects of the play are relevant to his family’s immigration experience even four or five generations ago, as they didn’t speak English and took whatever job they could get.

The play’s similarity to many of the actors and actresses’ family history brings forth its message. The cast wants to make sure this history is known and that it not only belongs to Latinx people, but all immigrants.

Acknowledging the common experience of all immigrants portrayed in the play, Trejo said: “This is a topic that happened throughout all communities, not just Latinos that have immigrated here, but Asians and Pacific Islanders and so forth. This is why I love theater. It’s a visual experience of true events.”

The play will be performed again at 7 p.m. on Dec. 12 and Dec. 14 in the Little Theatre, and tickets will be $10 to $15, according to the College of Liberal and Creative Arts event page.