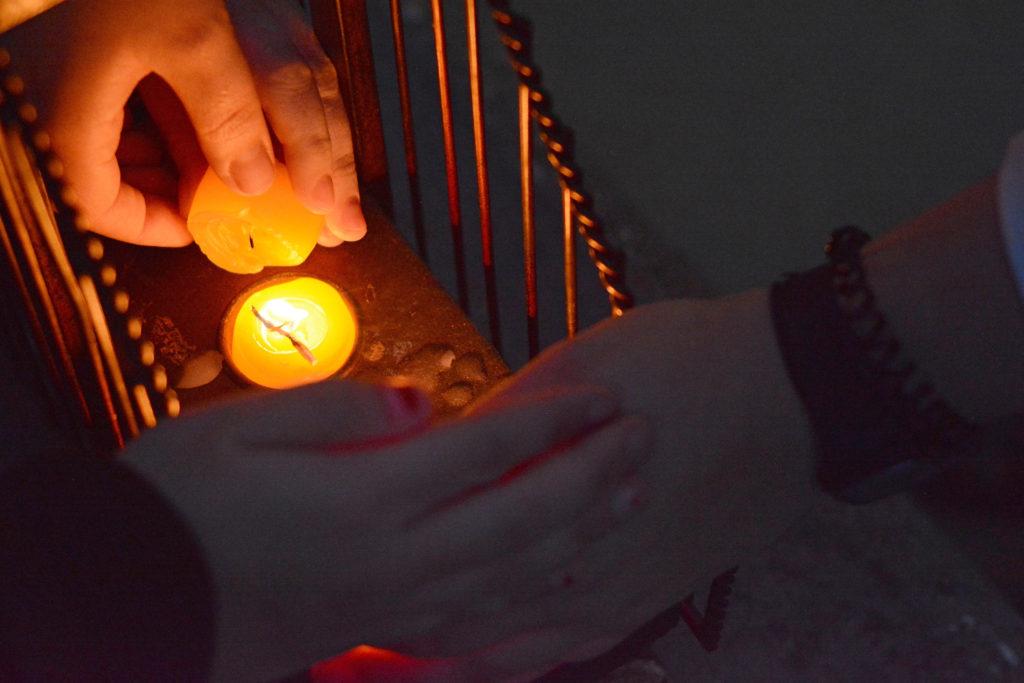 Students protect lit candles from flames while they light the Hanukkah menorah as they celebrate Hanukkah at SF State in San Francisco, Calif., on Monday, Dec. 3, 2018. The Jewish holiday is commemorates the victory of Jewish guerrilla fighters, known as the Maccabees, over the Seleucid empire - a Hellenistic state. (Aaron Levy-Wolins/Golden Gate Xpress)

About a dozen students in the Malcolm X Plaza huddled around a large menorah, designed in the likeness of the Bay Bridge, to block the chill December wind as members of the SF State Hillel group celebrated the second night of Hanukkah with a candle-lighting ceremony and a blessing at sunset, Monday, Dec. 3.

“Thank you, everybody for joining us on this cold evening,” said Hillel member Andrea Escaba to the assembled students. “The light is going to keep us warm inside.”

The Jewish group lit candles on campus Monday through Thursday last week and offered a Friday night Hanukkah party at Hillel House, which provided a sense of comfort and belonging to many students who were spending the holiday far from home.

“It’s nice to come together as a community and celebrate Hanukkah because a lot of us [normally] celebrate at home,” said Escaba, a transfer student from San Diego. “I usually light [the menorah] at home with family every night for the eight days, so it’s nice that [the group is] coming and doing this in the middle of campus so people can join in if they want to.”

Gabe Smallson, a Los Angeles native and transfer student, said Hillel played an important role in his life since coming to San Francisco, providing a space for his Jewish identity to be recognized, particularly in the absence of his family and community back home.

“It’s really nice to have a Jewish community up here, especially for the holiday,” he said. “I’ve always spent it with family growing up, so last year I didn’t know what would happen [until I found Hillel].”

“It’s just nice,” he added. “You could’ve been having a rough day, then you come here and at the end of the semester you get to celebrate [Hanukkah] with the Jewish community.”

The eight-day Jewish holiday, also known as the Festival of Lights, centers on the traditional lighting of the menorah, a candelabrum that holds nine candles. There is an elevated candle in the middle known as the shamash, which is always ignited first and used to light the other eight. On the first night, only the shamash and one other candle are lit, and on each subsequent night, an additional candle is illuminated.

This year the holiday fell on Dec. 2, through Dec. 10, but it can vary depending on how the Jewish calendar overlaps with the Gregorian calendar.

The two candles were lit against the biting wind after a brief struggle Monday, and when the blessings were sung, Hillel offered the chilled students two dozen donuts as part of the Jewish tradition of enjoying oily foods, like donuts and potato pancakes known as latkes, in honor of the holiday’s roots.

The tradition was borne out of a miracle that occurred during the Jewish reclamation of The Holy Temple in Jerusalem from the Syrian-Greeks, who had turned it into a Pagan shrine. In rededicating the Holy Temple, the Jews found they had only enough pure oil to reignite the Holy Temple’s eternal flame for one day. But miraculously, the one-day supply burned for eight days and nights, providing enough time to produce more pure oil.

“I think [this event] is really special because during the holiday season it can be kind of a bummer,” said Bronte Sorotski, as third-year BECA student. “Christmas is really easy to celebrate, but something like Hanukkah is a little bit more difficult, so having access to be able to celebrate this on campus with a group is really special.”