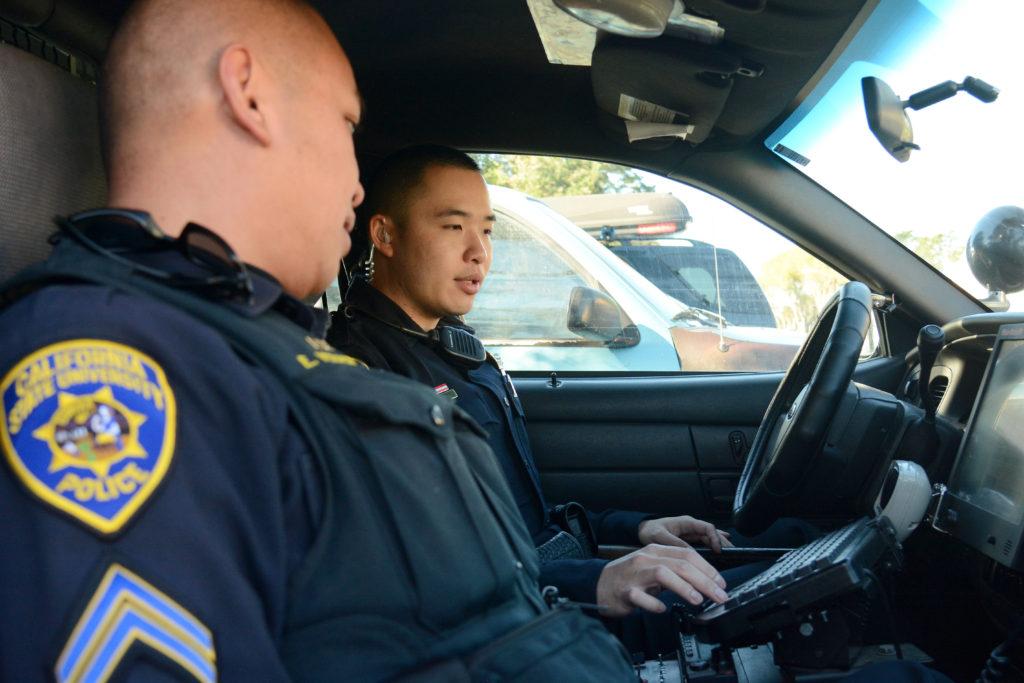 Police Cpl. Enrique Vera Cruz spent six years patrolling SF State, but on Nov. 30, he was especially alert. Vera Cruz had been training Officer David Lin for a week, and on this day, he was doubling as a mentor and as backup in case anything should go wrong on campus.

While on patrol, Lin suddenly brought the police car to a screeching halt. A transient man lying down on a student parking lot spurred Vera Cruz and Lin to investigate. He maintained his distance but treated the encounter with concern, not hostility.

“Hey what’s up man? We wanted to make sure you’re OK,” Vera Cruz said. “Is it OK if we pat you down real quick?”

The stop is routine for Vera Cruz, but a learning experience for Lin.

“It’s a grueling experience for both of us, but you have to be able to pass on the knowledge,” Vera Cruz said.

“There’s a certain reward you get out of it, especially when he’s done and out of the program and I see him covering me. It’s a really satisfying experience when you put them through and see them producing and contributing to the department.”

Vera Cruz laughed and smiled as he talked about working for the SF State University Police Department. Vera Cruz’s laid-back tone and personality contrasts the authority demanded by his uniform and badge.

“You have to wear a lot of hats,” Vera Cruz said. “At the end of the day, you’re just a problem-solver for the community.”

While most calls Vera Cruz responds to can range from property thefts to medical emergencies, he recalled how one incident stuck with him through the years. During Vera Cruz’s graveyard shift, an elderly man crashed his car near the 19th Avenue Chevron, leaving the vehicle tipped over across the outside lane.

Vera Cruz said the few pursuits he has been involved in were an adrenaline rush, but for newer officers like Lin, it is all too easy to lose control.

“Bottom line is you got to be careful,” Vera Cruz said. “Sometimes the lights and siren get you amped up and you have to calm yourself down in spite of that. You have to constantly check yourself and reevaluate the situation. Quite honestly, action can get tiring.”

Vera Cruz enjoys working out, mountain biking and flying drones in his spare time. He emphasized the importance of keeping his work separate from life at home.

“Cherish the days you’re not here, and when you are here, do the best you can,” he said. “There’s a physical toll, but sometimes it’s the emotional side of things that gets to you.”

Law enforcement was a goal for Vera Cruz ever since he graduated from high school. He majored in administration of justice and attended the Contra Costa County Sheriff Law Enforcement Training Center in 2007 for a punishing 26 weeks of physical and academic training.

“It’s pretty high stress,” he said. “You always had to be hustling. You’re running all the time. A lot of yelling going on. Physical training was pretty intense. Running miles at the end of every day was common. You’d get shin splints and have to brush it off.”

Vera Cruz said he was the first in his family to become a police officer, something not all of his friends and family thought of highly.

“My mom is kind of old-fashioned,” Vera Cruz said. “She’s an old-fashioned Filipino lady and she doesn’t seem to think highly of the job, thinking police here are the same as the ones back home in Manila.”

For Vera Cruz, the differences between law enforcement officers in the United States and the Philippines are vast.

According to a 2017 report by the U.S. Department of State, extrajudicial police killings and corruption rose sharply in the Philippines in recent years.

He said calls for police accountability in the United States don’t bother him and he doesn’t mind the hate his profession receives from critics.

“Even with all that negativity I know I’m doing my job right and I never worry about it,” he said.

Vera Cruz works to bridge the gap between students and the police department as part of the university’s Community Liaison program, which was formed 18 months ago.

He enjoys the slower pace involved in servicing a small population like SF State rather than running from call to call in a state of constant reaction, as required by police officers in larger agencies.

“Here,” he said, “you actually have an opportunity to engage with the community.”

Lin said he was grateful to be training under Vera Cruz. He graduated from the Napa Police Academy last year and is the university’s third new officer.

“What motivates me day in and day out is the huge possibility that you can make a decision where you can impact someone’s life,” Lin said. “There aren’t many jobs out there like that.”