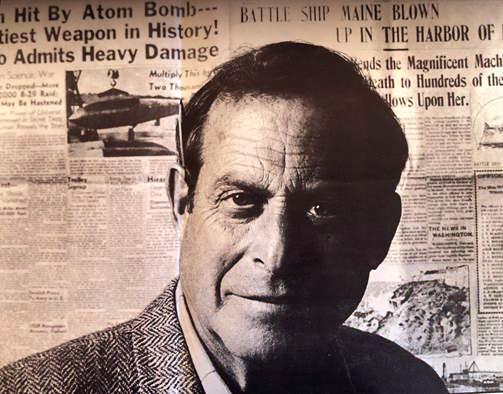 Better known as Jerry among friends, family and students, Werthimer was 93.

He will be remembered for his dedication to teaching his “mini-muckrakers,” as he called the thousands of students he taught and mentored as a professor and advisor to the Golden Gater Newspaper.

“In the 30 years he worked at SF State, he never raised his voice to his students — he was an incredibly kind and gentle man,” said Leonard Sellers, a former journalism professor at SF State.

Born in Chicago, Illinois, Werthimer served in the U.S. Navy as a communications officer in the Pacific during World War II.

He studied at Northwestern University and taught high school in Boulder, Colorado, in the 1950s, but was fired for refusing to sign a McCarthy-era loyalty pledge.

He returned to Northwestern University to get a doctorate in journalism and went on to become a journalism instructor at Washington State University.

He came to SF State as a journalism professor, where he co-founded the journalism department with Leo Young in 1960.

For 30 years, he’d walk to SF State from his home at Ingleside Terraces.

Werthimer shared an office with many faculty members over the years, and was known for his messy desk. In 1977, he was even awarded “The Messiest Room” award, which he displayed on his office door.

“In college, I was just one of the many young journalism students who were fortunate enough to have had Jerry Werthimer as a teacher, advisor and mentor,” said current SF State journalism professor Jon Funabiki. “In classes, I remember two things that he stressed — the importance of media law, which I was not so good at, and the value of community-focused journalism, a lesson that has stuck with me forever.”

His family recalls that Werthimer’s favorite classes were news writing and current events. He was so dedicated to teaching that he would give his own kids current event events quizzes over dinner every Monday night.

Many in the SF State community were also familiar with his Ingleside Terraces home, where students and co-workers would gather for parties or to work on putting the newspaper together.

“Jerry retired from teaching nearly three decades ago, but he and his wife Pat remained active with the university, frequently showing up at journalism department events and volunteering in the library’s used book shop,” Funabiki said. “[He was] a good man, he touched many lives.”

He took three sabbaticals during his career. One was on a Fulbright grant to Finland in 1966-67. The other was to teach graduate students in Beijing, China, in 1981. The third and last sabbatical he took was with his wife of 71 years. They went on a cross-country tour of community newspapers. This trip took them seven months and they drove through 39 states.

Werthimer is survived by his wife Patricia Strauss Werthimer, his two children Dan Werthimer and Jenny Mena-Werthimer, and his three grandchildren.

There will be no memorial service. His family wishes that in his memory people will think of him and enjoy some apple pie and coffee.

*Correction:  The Golden Gater Newspaper was incorrectly referred to as the “Golden Gator Newspaper” in the Tuesday, Dec. 18 print issue.