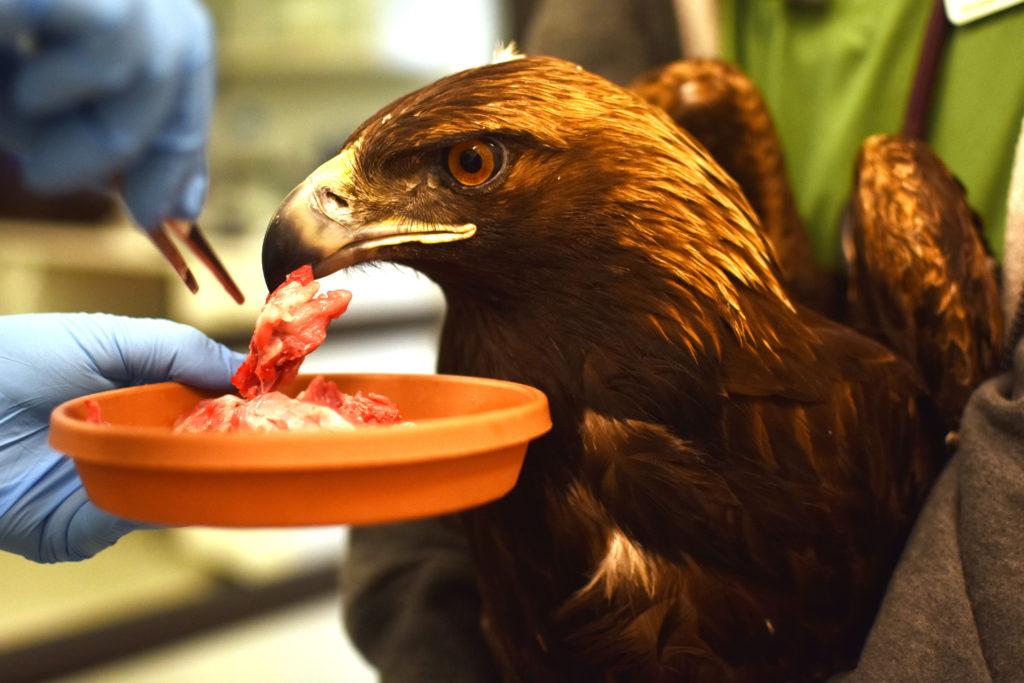 Lindsay Wildlife Hospital manager Aireo Shipman knows firsthand how stressful, unpredictable and dangerous it can be to work as a wildlife rehabilitator. Just last week he was in a cherry picker above a house trying to untangle two bald eagles in a tree.

“I’ve been doing this for a long time and as soon as I think I’ve seen everything, something else comes up,” Shipman said. “Literally last Monday I was 30 feet up with two bald eagles in a plastic bucket. That’s Monday for me!”

Lindsay Wildlife Hospital received its 5,792nd patient when Xpress visited last month. During the summer — wildlife newborn season — there can be as many as 85 animals admitted per day.

“We learn not to plan our days too much,” Shipman said.

Every morning Shipman and a small dedicated team of veterinary technicians make rounds to check up on every sick, injured or orphaned animal in their care. Although Lindsay Wildlife Experience includes a museum with animal “ambassadors,” the hospital focuses exclusively on rehabilitation efforts.

Hospital patients range from baby deer mice to coyotes and foxes, but 75 percent of the animals Lindsay receives are birds, according to Shipman.

“We are part zoo, part hospital,” he said. “We do triage, we see a lot of medical cases, so we have to maintain the highest level of medical care and protocols. Once we get [an animal] stabilized, we have to take care of them until they are releasable.”

Some 98 percent of the animals Lindsay treats are there because of human actions, intentional or not.

“The things that get me and the other technicians are when we get in an animal that’s been shot,” Shipman said. “That’s intentional. That’s somebody pointing a gun at a wild animal and shooting.”

At 9 a.m. the hospital staff let volunteers in to assist them with cleaning, feeding and distributing medications to the patients. According to its website, approximately 500 volunteers help out at Lindsay every year, giving the skeleton crew of full-time staff precious time to treat new arrivals and to check up on the rest of the animals.

“There’s always something going on,” Shipman said. “As soon as you’re feeding one thing, something else comes through the door.”

A member of the public brought in the first patient of the day, a woodpecker that had been mauled by a cat. For hospital technician Shannon McClain, cat-caught animals have become too common. She performed an exam on the bird, methodically checking each wing and body part for damage, before giving the woodpecker subcutaneous fluids.

“He doesn’t look very good. I’m going to make sure he stabilizes and warms up a little bit,” McClain said as she gently placed the woodpecker into a warm cage.

“It wasn’t going to make it no matter what we were going to do,” Shipman said. “We made it comfortable enough to pass away quietly, but that’s all we could do.”

Later that day a crow with a broken pelvis was euthanized. Animals that cannot recover fully on their own must be put down, according to Lindsay’s wildlife permits.

None of the wildlife patients are given names, but that doesn’t make it any easier for hospital technician Max Lipman to avoid becoming attached to them.

“We all get emotional at times because it’s hard,” Lipman said. “It’s hard when we have to accept, unfortunately, that an animal is so injured that the best thing anybody could do for it is humanely euthanize it.”

When asked about why he became a wildlife rehabilitator, Lipman smiled.

“I’ve always loved wildlife,” he said. “We all want to get these animals out of here as soon as they can, so they can go back in the wild where they belong. We all love it, so it’s worth all the pain, the emotions and stress that every day can bring.”

Lipman and McClain started as volunteers at Lindsay before they became full-time technicians.

Lipman couldn’t help referring to the tiny baby mouse he was feeding with a syringe full of milk as “cute,” but he warned how easy it is to let your guard down with wild animals.

“That animal is in a position where it is in fight or flight. It’s going to try to fight you because it doesn’t know you are trying to help it,” he said.

Handling patients with care, without causing harm to them or to others, is the trickiest part of being a wildlife rehabilitator. Some of the most dangerous animals at Lindsay can be birds of prey and poisonous snakes. Tools such as raptor gloves and snake tongs are essential.

“It’s not like we go out to Home Depot and get some welding gloves. Those are leather Kevlar gloves because raptor talons are extremely sharp,” Shipman said. “They make a living by puncturing flesh and unfortunately that’s what we are made of.”

Almost all of the hospital staff have been attacked by their patients at some point in their careers.

“All of a sudden I saw the back of his throat come at my face,” McClain said.

On another occasion, she was bitten by a raccoon with broken teeth and severe neurological issues.

“It bit me on the finger through Kevlar gloves and through three pairs of nitrile gloves,” she said.

Shipman remembered the time a great horned owl bolted from his grip.

“It went through my hand like putty,” he said. “That took about five minutes to get the talons out

and about 10 minutes to stop the bleeding.”

Other work hazards are not so obvious. Shipman has been sneezed on by a coyote before and has had lice and flat flies crawl all over him while restraining animals.

Urine, feces and vomit are also frequent projectiles from the patients.

“You always need to bring a change of clothes,” Lipman said.

Lindsay Wildlife Hospital has a 42 percent success rate for animals that initially come through the door, according to Shipman.

“In general, the success rate is not great and that’s wildlife rehab across the board,” he said. “And that’s kind of why it takes a special person to be able to do this, because it’s death day in and day out.”

The figure that Shipman is most proud of is Lindsay’s 80 percent success rate for animals that survive after 24 hours of care.

“That’s the number I like to share with people because if we just say, ‘Oh yeah, your animal only has a 42 percent chance of living,’ nobody wants to hear that,” he said.

A red-tailed hawk was cleared for release that day only to be replaced by another hawk in worse condition that afternoon. The weakened predator puffed its chest up and tried to spread its massive wings out during the exam as the staff inspected it.

The hawk was likely hit by a car and had a 50-50 chance of pulling through, according to Lipman. If the bird is strong enough, it will be transferred to the aviary next to the hospital, but it was too early for the staff to make such an optimistic prediction.

“We always do what we can, but it’s hard,” Lipman said.

Wildlife rehabilitation might seem unrewarding, even punishing to outsiders, but Lipman disagrees.

“I think it’s our responsibility as a population, not just locally but globally, to at least try to care for the wildlife that we inadvertently injure,” he said. “Whether that’s a turtle that swallows a plastic bag or a house finch that hits a window or a hummingbird that was caught by a cat — it’s a way for us to give back.”