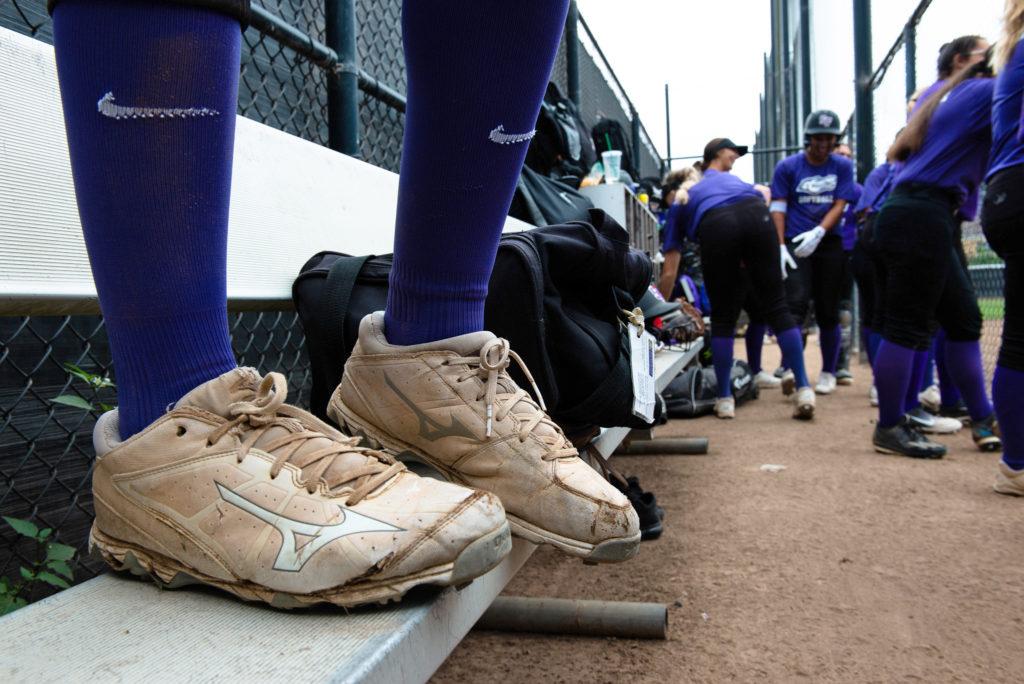 A softball player wears her Mizuno cleats for the annual alumni game at the Softball Field on Saturday, Oct. 13, 2018. (David Rodriguez/Golden Gate Xpress)

A young and speedy SF State softball team looks to take the next step in 2019 after falling short of the postseason last year.

The Gators had a 24-31 record last year in Alicia Reid’s first season as head coach. The team finished sixth in the California Collegiate Athletic Association with a 19-21 conference record, narrowly missing out on the playoffs. Cal State San Bernardino snagged the fourth and final spot with an 18-16 record.

Heading into Reid’s second year, the Gators have 11 freshmen on the roster and only three seniors.

Despite the disappointing 2018 record, the Gators led the CCAA in stolen bases (125) and Reid believes the team will continue their success on the base path.

“Our strength is going to be our speed, we have great team speed,” Reid said. “We’ll be able to put pressure on defenses and force them to make mistakes.”

Junior utility Michelle Castro, sophomore outfielder Andrea Hildan and senior utility Hayley Nunes return for the 2019 season, with the trio serving as the Gators‘ top hitters last year and were named All-CCAA. Castro was also named CCAA Newcomer of the Year with an SF State record 45 steals and 17 doubles in 2018.

Hildan led the Gators with a .367 batting average and four triples during her freshman year. The sophomore explained the style of play in college softball is much different than what most of these players are used to, so there will be a learning curve.

“Half of our team is freshman this year so we have a lot of focus things to work on, like our base running,” Hildan said. “They learn a completely different style coming from the travel ball world.”

Some of the incoming freshmen include infielder Samantha Alvarez, who hit .455 during her senior year at Kern Valley, and catcher/outfielder Tiana Jacques, who batted .434 with 19 RBI for Castro Valley High School.

The Gators pitching staff gets some new additions as well, with Natalie Minteer recording a 1.99 ERA and 126 strikeouts last year at University City High School. Emily Mitchell is a junior transfer from Feather River College and was named GVC Pitcher of the Year and California All-State Pitcher during her freshman year.

Karla Soto led the Gators in ERA last season with 3.57 in her 35 appearances. The senior is coming off a team-leading 14 complete games and finished 2018 with a 10-12 record. Sam Drucker and Kelsey Goodner are pitchers who will also be returning. Drucker posted a 3-4 record with a 5.09 ERA, while Goodner pitched 9.1 innings last year with a 5.25 ERA.

The 2019 season has already begun for SF State. The Gators traveled to Las Vegas for the tenth annual Desert Stinger Tournament, where the team scored 27 runs over three games and left with a 3-0 record to kick off their season. The Gators start the regular season on the road against defending CCAA champion Chico State on Feb. 8. The Wildcats enter the season atop the CCAA preseason coaches’ poll, while SF State was voted seventh. The Gators concluded the 2018 season with a four-game series against Chico State, losing all four games to the eventual conference champion.

The Gators return to San Francisco on Feb. 15 to take on Sonoma State. SF State won three of four games against the Seawolves last season. The Gators had a 7-17 home record last year, something the team is looking to improve in 2019.