Loved ones honor an ‘Angel’ 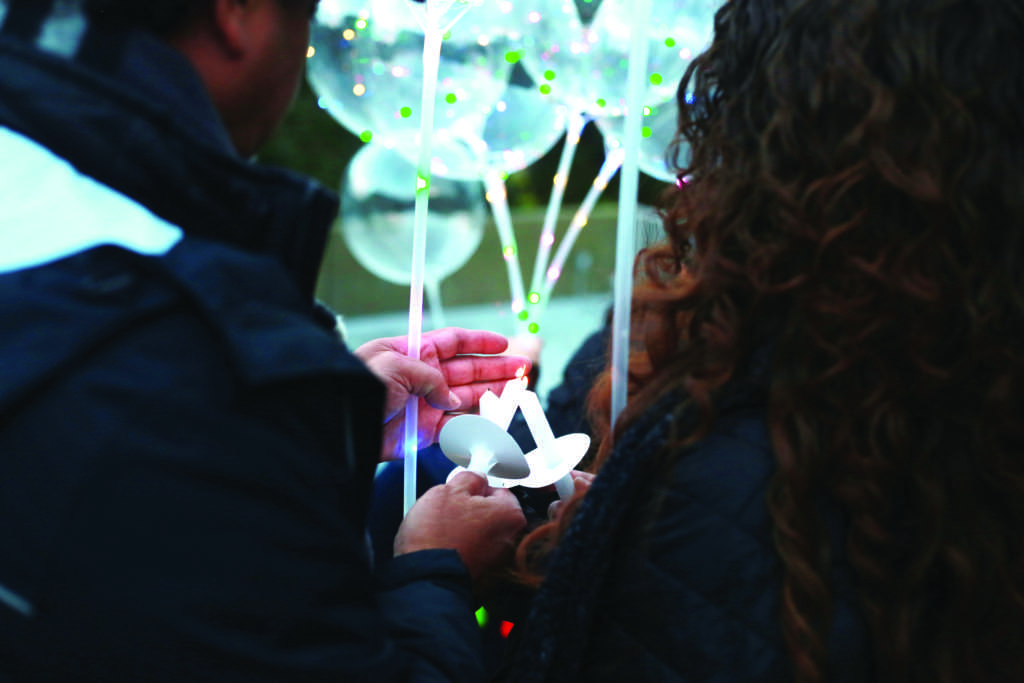 A vigil for Angelina Pinedo at the top of Cesar Chavez Student Center, Feb 4. (James Chan/Xpress)

Family, friends and classmates remember SF State junior Angelina Pinedo, who was killed in a Redondo Beach hit-and-run Jan. 26, as a friendly, optimistic, outgoing young woman with a bright future.

Perched atop the Cesar Chavez Student Center between rain showers, loved ones lit candles and celebrated the 21-year-old business major’s life Monday evening in the wake of the devastating loss.

“She loved being a part of this school, it was her dream to come here,” Pinedo’s aunt Veronica Duran said. “Her sister Michelle came here, so she visited as a kid and we have a picture of her holding [Michelle’s] diploma.”

SF State was Pinedo’s home away from home years before she enrolled in 2016, because as a child she often spent weekends visiting her older sister on campus. It was then that she developed an affinity for the vantage point afforded by the stairs above Cesar Chavez where her twilight vigil was held.

“We have a 15-year age difference and she would spend a lot of weekends and some holidays [on campus],” Michelle Pinedo said. “We used to walk up there and it was her favorite spot on campus.”

Pinedo was a business major, but she was planning to apply to the sociology department because she had dreams of becoming a social worker to help disadvantaged children.  During high school she worked with children as a camp counselor and lifeguard at a country club in Manhattan Beach with her older brother Michael Pinedo.

“I’ve experienced firsthand her dealing with kids, her patience, her calmness and tending to the needs of the young ‘uns,” he said. “She was a pretty great leader with them. [She] kept them in check [and] kept them safe.”

“She enjoyed kids,” he added. “She was a kid herself.”

Pinedo will be remembered by a wide circle of friends both at SF State and back home in Rosemead, including childhood friend Mary Tan who first met Pinedo in elementary school.

“I’m still struggling to come to terms with this reality, where Gina’s not a part of it,” Tan said.  “Everyone talks about the light she brought into other people’s life. She had a way of empathizing with folks she didn’t know and she had an energy, an aura that is so rare these days.”

The friends reconnected in the Bay Area when Tan enrolled at UC Berkeley a year before Pinedo started at SF State.

Like many who knew Pinedo, SF State sophomore Alison Colcord called her a “people person.” The two met in the spring of 2017 when they took a stress reduction class that neither much enjoyed. Both had friends in the class, and outgoing as always, Pinedo turned to Colcord one day and started a conversation.

“She sat in the same row as us and just started talking to us one day and we all became friends,” Colcord said. “She’s one of those people where she could make friends everywhere and everybody just got along with her.”

Pinedo’s sister Michelle said being shy was not in her nature, and that Pinedo always assumed the best in people.

“She loved just having conversations with people and getting to know them, she didn’t have reservations,” Michelle Pinedo said. “She was just a very loving, genuine, forgiving person and she had such a bright personality.”

Colcord experienced this directly. She said Pinedo’s bright personality often had the effect of buoying her spirits.

“She was always really positive and optimistic,” Colcord said.  “I’m often not [optimistic], so it was very helpful, she made me feel better a lot.”

Pinedo was very physically active and enjoyed hiking, snowboarding and surfing. She also took part in a soccer club on campus and was one of only four women to practice with the SF State rugby team in 2017.

“We were trying to put together a women’s team and she was one of the first people to come out,” Wade Hess, head coach of the rugby squad, said. “They were practicing and they wanted to learn the game a little more so they asked to play with the men.  She was one of the most outgo-
ing, ready-to-try-anything girls.  [She was] nice and super coachable [and] she had a connection with everybody on the team.”

Hess said the effort to form a fully-fledged SF State women’s rugby team is still underway, which includes a website with a page honoring Pinedo.

“If there was a list of people who I thought wouldn’t be here, she would be pretty low on it,” said Hess. “[She was] one of the nicest people you’ll ever meet.”

Another hobby of Pinedo’s was globetrotting, something she enjoyed doing with her sister.  Michelle Pinedo said the pair often talked about how they were ideal traveling partners. They had been to Singapore, Thailand, Cambodia and Mexico together, and embracing local cultures and spontaneity wherever they went was important to both sisters.

“We hiked a lot, and tried to soak in the culture,” Michelle Pinedo said. “We weren’t the type of travelers that booked a group package. We always did our research and liked to meet local people.”

They also often traveled by the seat of their pants, deciding to take off on a road trip to the Grand Canyon and leaving the next morning with only a destination in mind, or traveling through much of Southeast Asia without reservations.

Colcord said she’s still in shock at the loss of someone she spent so much time with in the last year.

“It’s really surreal because she was one of my closest friends here and the whole thing felt just not real,” Colcord said. “I have all these videos and photos with her and just looking at that stuff makes me want to hang out with her. Knowing that I can never do that anymore is just so devastating and confusing.”

As much as Pinedo loved traveling, she also loved being close to her roots back home in Rosemead. Michael Pinedo said she had a rare tenderness when consoling people of all ages, including a senior couple with whom she attended church.

“She was great with the elderly people and she befriended Peggy and Ed,” he said. “She would visit them and make sure they were good.”

Michael Pinedo said she had grown very fond of Peggy and Ed, as if they were her own grandparents. When Peggy and Ed died, her brother it said it was a sad and difficult time for Pinedo, but she was also well composed. She shared all the positive things, all the funny jokes and all the great talks they had.

“She didn’t want to dwell in their sickness, she wanted to uplift their legacy,” he said. “It’s mind boggling to me that she taught us how to commemorate those two people and now she’s gone. Now we have to honor her legacy of love, truth and happiness and really lead our lives with that example.”

Mental health services are available to students in the Student Services Building Room 205 or by calling (415) 338-2208. The Employee Assistance Program offers around the clock counseling to faculty and staff who call (800) 367-7474.