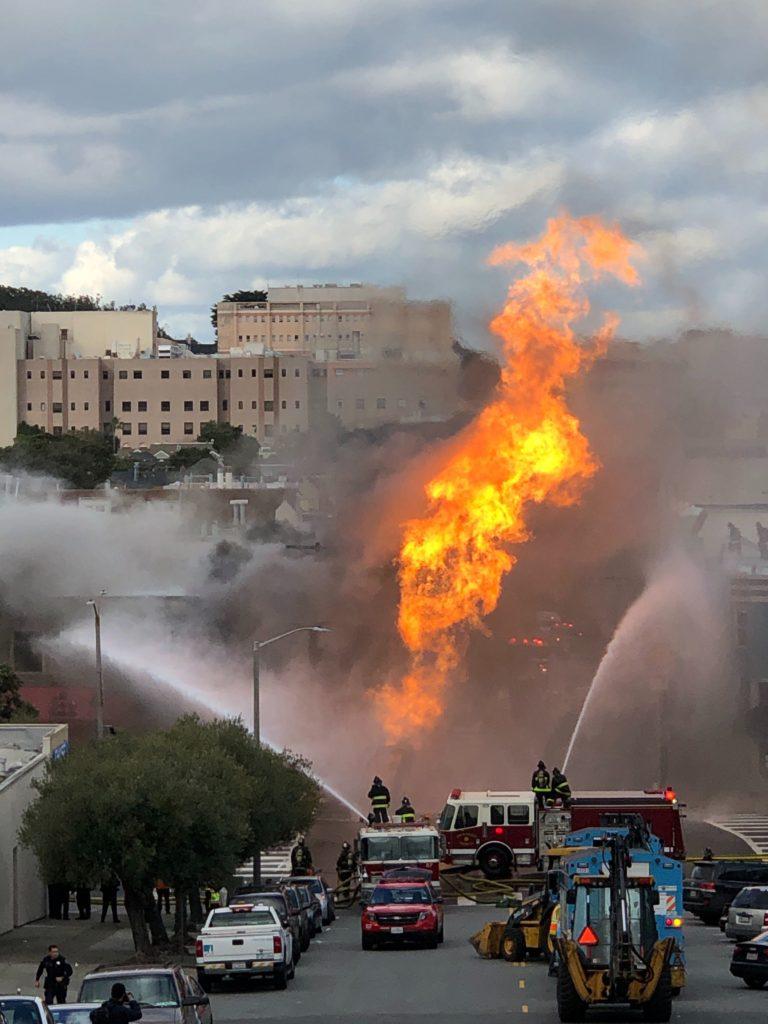 Firefighters contained a 3-alarm blaze, triggered by a gas leak in front of Hong Kong Lounge II, at 3:35 p.m., according to PG&E spokesperson Teresa Jimenez.

The five workers who were unaccounted for when the fire broke were found, according to a tweet by SFFD.

Jimenez said the fire started when a third party construction crew struck a 4-inch plastic distribution line that was already marked by PG&E workers on Jan. 28.

“Construction companies are meant to call this line before they begin digging,”  Jimenez said. “That is standard procedure.”

“At this point there are no injuries associated with it,” Hayes-White said. “We have cordoned off and set up a perimeter on a block on each side of where the incident is. All those buildings were searched to make sure residents were alerted and evacuated.

A plume of flame shot into the air at about 1 p.m. near Geary Boulevard and Parker Avenue before spreading, damaging five buildings and forcing the evacuation of residents within a one-block radius, according to the SFFD twitter account.

“We anticipate some displacement and we have some reunification sites,” Hayes-White said. “One is at Mel’s Diner…up the street.”

For those SF residents displaced by today’s fire, a shelter will be opened at 6 p.m. at the Cathedral of St. Mary of the Assumption, located at 1111 Gough St.

Jimenez said about 2,500 PG&E customers are without power due to the fire.

Hayes-White said the the buildings affected by the blaze were mixed-commercial and residential use.

Jimenez said workers shut off the flow of gas at 3:36 p.m., 300 customers will be without gas until the damage is repaired.

An Xpress photographer at the scene of the incident said PG&E workers arrived at about 2:30 p.m.