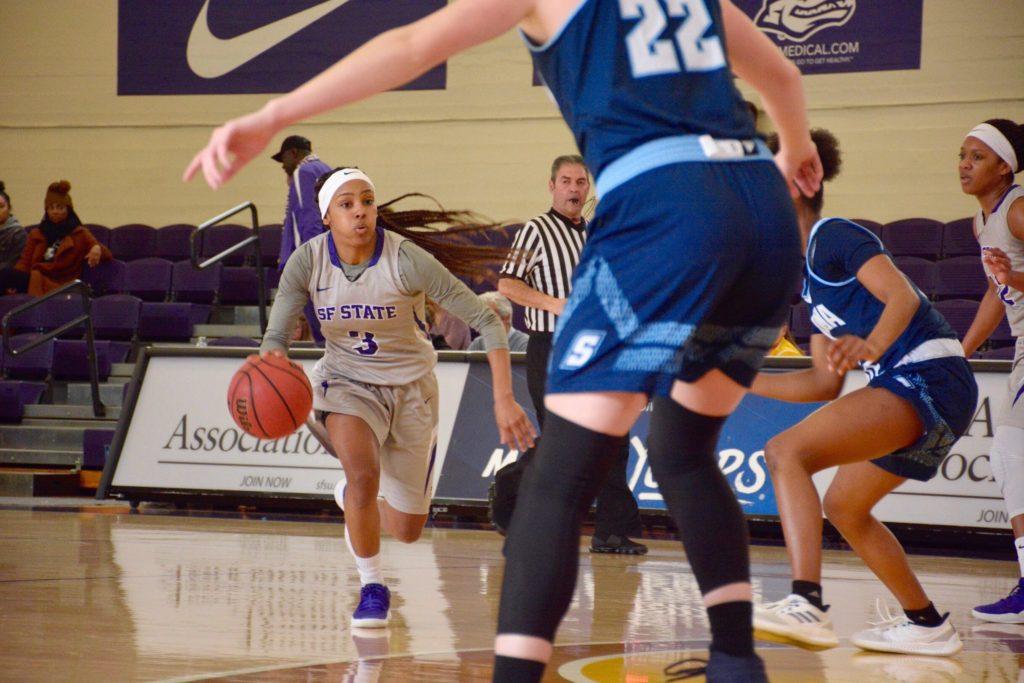 The women’s basketball team came out flat in their loss to Sonoma State 78-65 at The Swamp Saturday.

The Gators fell behind from the start of the game, trailing by eight points by the end of the first quarter. They fell by as much as 11 points with 1:25 to play in the first.

“We weren’t sharing the ball with each other,” said Danielle Parker, senior guard for the Gators. “We were all playing by ourselves.”

Yet another lackluster performance extends the Gators losing streak to six.  The team’s leading scorer, Jhaina Stephens, averaging 14.5 points per game, struggled most of the game, shooting 1-4, giving away two turnovers and committing three fouls in eight minutes. She got into early foul trouble and the offense became stagnant without her on the court.

“We ended up playing hero ball,” said Natasha Smith, head coach of the Gators.  “[Stephens] is a great defensive presence and she is our greatest offensive weapon, so anytime she is sitting, it hurts.”

“On the defensive end, our girls were playing hard,” Smith said. “They were playing hard, but it was not smart. Once they were out of position, it put everyone else at risk and there’s no help to help the helper.”

The game seemed out of reach at halftime as the Seawolves nearly doubled the score on the Gators, 41-22. The lowest scoring Gator half since Dec 1st.

“I think our problem was that we did not keep our poise,” said senior Gators guard Amani Alexander. “We were trying to score right away instead of relaxing and [running] a play.”

Overall, the Gators allowed Sonoma State to shoot over 55 percent from the field and 40 percent from downtown.  The Seawolves were able to penetrate San Francisco’s defense and score 46 points in the paint.

They wanted it more,” Stephens said.  “They were outhustling and outworking us until we decided to turn it on. The sense of urgency they had compared to us, they would go for loose balls and everyone for Sonoma was cheering.”

Parker was able to put in 10 points from the bench, the team’s second-leading scorer and was also able to grab three offensive rebounds.

“I was confident,” Parker said. “My teammates gave me some good passes, so that helped of course. I got to play hard.  I am a senior, so I only have a couple of games left.”

Entering the fourth quarter, Stephens only had two points, but she was able to get aggressive in the fourth. She scored 17 points in the last
quarter alone.

With a few minutes left and the game all but won for Sonoma, Stephens stayed aggressive and drove to the basket where she was hit midair and took a hard fall on her hip. She got up, walked it off and appeared fine.

”I do not remember that,” Stephens said. “I just could not get my feet under me when I was falling.”

The Gators had a miserable shooting night, with only 36.5 percent and 26.3 accuracy from beyond the arc.

“We try to rush things, [that’s] the biggest problem,” Parker said. “We will play hard, but we’re not doing the right thing.”  With the Gators, down as much as 27 points and not leading at all during the game, it was their self-respect that made them keep playing.

“It is a pride thing,” Smith said. “You have to give everything that you have like you should anytime you step on the floor.”

SF State looks to get back on track when they play at Cal State East Bay on Thursday, Feb. 14th at 1 p.m.