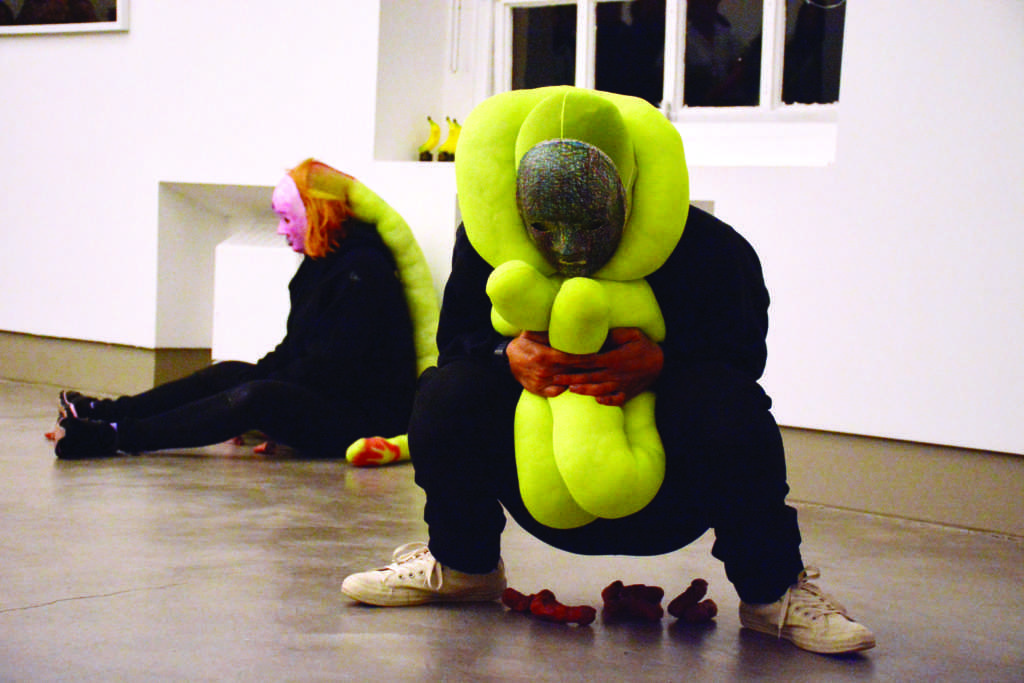 Glittery bananas and poop-shaped ceramics were among the whimsical art on display at the “Laughter and Tears” art exhibition.

Through a variety of media like ceramic, chewing gum and marble, the exhibition demonstrated a theme of juxtaposition by displaying artwork that alluded to intense social issues with humor. According to the
gallery guide, the exhibition aims to create laughter and to further explore the melancholy and absurdity of the human condition.

At the beginning of the exhibition, the lights in the gallery dimmed and UC Berkeley student Heesoo Kwon’s performance, “Genesis of Leymusoom,” began.

Kwon, alongside six other performers, danced to honor the religion Kwon created called Leymusoom to support a feminist dystopian society.  Together the troupe mimicked, danced and acted to a recording on the written piece of the Genesis by Kwon.

The performers donned black and wore patterned paper masks with colorful cotton-stuffed stockings hanging from their heads like wigs. The costumes were original pieces of Kwon’s exhibit “Bbobbos and Eebbobbos,” through which she wished to spread the ideology of a world that appreciates all of Earth’s creatures.

When the performance concluded, the gallery was left littered with pieces of brown ceramic shaped like feces, much to the audience’s confusion and wonder.

The show’s singular ending, according to Kwon, was representative of day five of the Leymusoom Genesis when god fed the Bbobbos great foods of fulfillment, causing them to collectively defecate.

The feces-shaped ceramics were not the only unusual installations at the exhibition.  SF State graduate art student Calum Craik showcased his piece titled “Monument,” which consisted of a large piece
of gum attached to a steel stick poking up from the gallery’s wooden floor. With this piece, Craik aimed to discuss social issues like employment and the narrowing workforce.

The gum art took just 30 minutes to create, at a cost of $7.50 and it is now on sale for $1,200. He described his piece as something simple yet subliminal.

Richard Bond, an SF State studio art major in attendance, described Craik’s piece as his favorite of the night. Bond attended the show because Craik had invited some of the students from his class. Craik is a teacher’s assistant at SF State.

“‘Monument’ provides an uplifting energy to the gallery,” Bond said.

Many attendees passed right by Craik’s installation Friday without noticing it because of its placement. But once viewers caught on to the subtle art, they often laughed and knelt down to examine it more closely.

His second installation, “Vessels, Barriers and Containers (i),” was created from a piece of marble from a San Francisco condo-development site. The chunk of marble leaned against the white wall and at its base was a bronze lemon slice attached by a black elastic hairband. Craik said the abstract piece alludes to a variety of topics but he believed the most relatable theme is the constant development of housing in urban areas.

It featured real bananas covered in glitter and hanging from the ceiling. Attendees were encouraged to and did interact with the installation by spinning the bananas and taking pictures, videos and boomerangs of the whirling, glimmering fruit.

Samson-Tabakin attempts to use whimsical absurdity and material seduction in her installments in order to provoke questions in the minds of viewers.

Other installments in the exhibition featured video animation, pigment print, hematite, porcelain and a mood ring.

Guests expressed appreciation for the venue and its open nature to featuring such outspoken art.

He said he thinks exhibitions like “Laughter and Tears” are good for the culture, especially because Embark Gallery offers a space for Bay Area art students to exhibit their work and feel represented.

Many of the pieces featured in the show are for sale and the prices are included in the gallery guide available at the exhibit.

The “Laughter and Tears” exhibition will be open at Embark Gallery every Thursday through Saturday from 1-6 p.m. until March 30.

*Correction: The print story of this article that ran on page 5 of the Feb. 12 issue had the wrong byline. Audrey Esomonu did not write this story, it was Camila Ramirez Diaz. The Xpress regrets this error.